Nothing enlivens a courtroom drama quite like the decisive—or furious—crack of a judge's gavel. News articles reporting on legal issues also tend to be accompanied with stock images of this ostensibly classic piece of courtroom furniture, as a useful visual shorthand. Unfortunately, so far as the courts of this country go, this particular symbol of judicial authority is a myth—as a charmingly obsessive new website seeks to make clear.

inappropriategavels.tumblr.com has but one point to make, and makes it well: judges in the courts of England and Wales don't use gavels. Indeed, as retired Judge Advocate (military judge) Robert Seymour puts it on his blog, "judges have never, at any time, used gavels in England".

Readers of national newspapers could be forgiven if they believed otherwise, however: the website is replete with examples like this one, where a gavel sits prominently over a story about a courtroom in Preston. 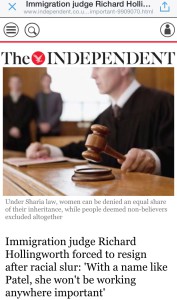 It's not just the media; plenty of institutions who really should know better have been called out as well. This gavel was apparently spotted in the City Law School's library.

Scotland has its own, different legal system, as to a lesser extent does Northern Ireland, so what's true in the procedures of English and Welsh courts isn't necessarily the case for their Scottish or Irish counterparts. But the Scottish Court Service have told us that no gavels are thumped north of the border either.

Gavels are used by judges in the United States, giving commentators an opportunity to blame "cultural imperialism" for their appearance on these shores. Notable instances include a report in the Telegraph earlier this year, in which a heated exchange between barrister and judge was enlivened by the latter "banging his gavel on the bench". This seems to have been a creative embellishment of the account given in the Court of Appeal's judgment on the incident, which was published on the same date as the Telegraph's article.

Interestingly, the latest word from Inappropriate Gavels places a slight caveat on the absolute rule against gavels: in Inner London Crown Court, according to HM Courts and Tribunals Service, a gavel is used "to alert parties in court to the entrance of the judge into the courtroom".