What do recent headlines on abortion, votes for prisoners, government surveillance and deportation of immigrants have in common? They all involve the European Convention on Human Rights (ECHR), and whether it has been breached by the government. Using the Human Rights Act 1998, British courts can decide on this—but there is also a European Court of Human Rights.

Since 1966, individuals have been able to take cases against the British government to this European Court, if they feel their ECHR rights have been violated. Complaints about this system often focus on decisions of the Court that go against the UK, which has been alleged to happen in three-quarters of all cases. But this overstates the scale of the issue.

The overwhelming majority of cases lodged with the European Court fall at the first hurdle. Its judges can rule a case "inadmissable" long before it ever reaches a hearing, for reasons including not making full use of the domestic courts, not being an ECHR issue or not being worth the Court's time ("manifestly ill-founded").

Those cases that get a judgment of the Court can still fail at that point. A judgment usually means the judges have heard evidence from both sides and delivered a detailed opinion on the law, concluding with a decision that the applicant's rights have been violated, or they have not. Multiple cases about similar issues can be dealt with in a single judgment.

If you only take the judgments involving the UK over the past few years, it appears as though the UK frequently loses cases. 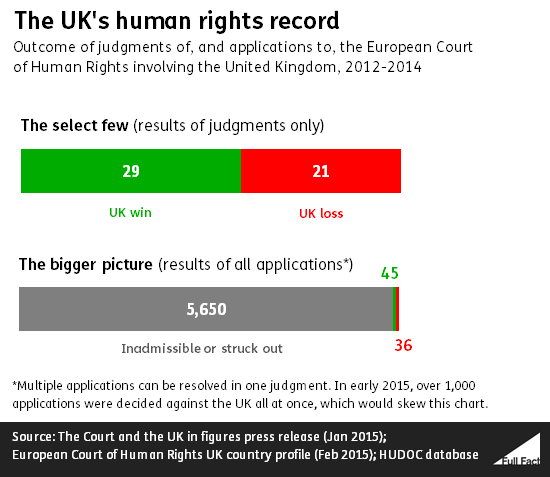 But this way of looking at it ignores all the cases lodged against the UK that were dismissed at an earlier stage. Looked at in this context, the UK's human rights record seems far less alarming.

These figures represent a slight improvement in the rate of judgments against the UK: between 1966 and 2010, the rate of applications that led to a 'loss' was 1.8%. The statistics aren't directly comparable over time, though, because the court sometimes changes the rules on how it examines cases—most recently in 2010.

The on-going impasse over prisoner votes—which came before the Court again in February 2015—is changing this otherwise fairly consistent pattern. The Court's latest move was to decide 1,015 applications in a single judgment—holding that the ECHR rights of each individual had been violated by the UK's ban on voting for all convicted prisoners. In most years, there are only a handful of individual cases decided by a judgment. So a similar chart for 2015 would show a much higher loss rate than usual; that would be an awful lot of red.