What’s happened to fire services since 2010?

This figure seems to refer to the reduction in all staff working for fire and rescue services in England. There are 6,800 fewer firefighters in England than there were in 2010.

“Under this Government, there are now 11,000 fewer firefighters in England than there were in 2010, and deaths in fires increased by 20% last year.”

The number of fire-related deaths increased by 20% last year to 346, according to the latest statistics. That included an estimated 80 deaths in the Grenfell Tower tragedy in June 2017. Since the statistics were published the Metropolitan Police has revised the death toll in that fire to 71.

Firefighter numbers have decreased by 6,800 since 2010

There were just under 11,500 fewer full-time equivalent staff working for fire and rescue authorities across England in March 2017 compared with March 2010. That’s a fall of 22%.

This figure includes all staff working in fire and rescue, not just those who are firefighters.

Altogether the number of people working as firefighters in any capacity has decreased by 8,600 FTE since 2010.

Fire-related deaths have increased by 20% since last year

The latest figures from the Home Office show that there were 346 fire-related deaths in England in the 12 months to June 2017. That’s a 20% increase compared to the year before (when there were 289) and the highest it has been since 2009.

A fire-related death is one that would not have occurred if there hadn’t been a fire. It includes deaths as a direct or indirect result of injuries in a fire. 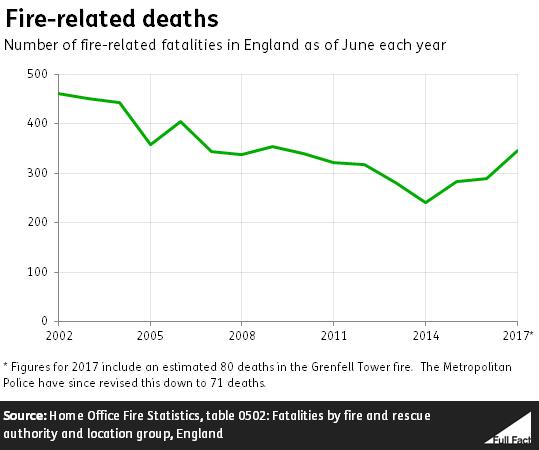 The Home Office has recently looked at what factors can cause the number of fire-related fatalities to increase or decrease.

Decreasing numbers of fire-related deaths can be linked to things like decreasing use of chip pans, a fall in smoking and in drug and alcohol consumption, increasing use of smoke alarms and preventative work by fire and rescue services. It also linked increasing numbers of fire-related deaths to an aging population (with older people more likely to die in a fire) and increased overcrowding. The Home Office concludes that “the cumulative impact appears to be that the downward pressures have exerted the most influence, resulting in an overall reduction [in fires and fire-related deaths] over the last decade.”

The Fire Brigades Union previously pointed to reduced resources and increasing response times as reasons behind the rise in deaths.