Women on the bench

Judges have been talking a good deal about diversity recently. On 22 October, two new High Court judges were announced, both female and one of them Asian, which the judiciary said would take the number of women High Court judges to the highest ever.

The overall picture is that around 38% of those serving as judges on all courts and tribunals in England and Wales are women.

Exclude the more specialist and perhaps less prestigious tribunals, where most judges are part-time, and it's one in four. That proportion has been rising over the past decade, though. 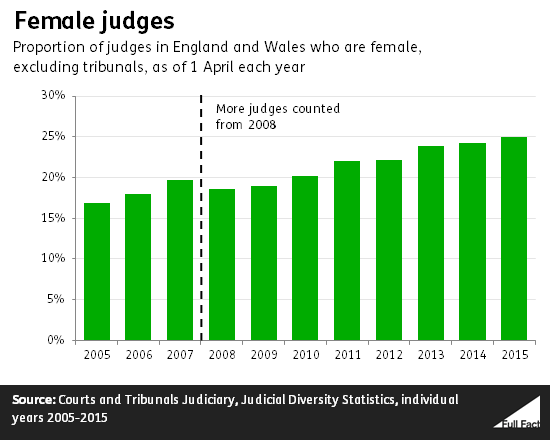 Several groups of additional judges were included from 2008 onwards, meaning that the figures for 2007 and earlier aren't directly comparable, but the numbers are small and don't significantly affect the proportions.

There's also (incomplete) data on judges from an ethnic minority background. This shows that 160 of the 2,500 judges—6%—who chose to provide this information fit the description.

The Lord Chief Justice gave a speech last month on this very subject. In it, Lord Thomas touched on a number of statistics, which we thought we'd investigate.

While it looks as though close to 60% of these are female, that's a tiny subset of the judiciary as a whole. Even if they all progress through the ranks over the years, it won't shift the demographics that much, as many people will become judges when they're older than 40.

"In 2005 there were two female judges in the Court of Appeal, but now we have eight"

This is correct. Female members of the Court of Appeal—roughly speaking, the second highest court in England and Wales after the Supreme Court—were two out of 37 in 2005, and eight out of 38 this year.

On the Supreme Court itself, though, only one of the 12 is female (Lady Hale, the Deputy President).

Going down one rung on the judicial ladder, the proportion of female judges on the High Court has more than doubled in the past decade, as the Lord Chief Justice said. The latest published statistics show that 21 out of 106 High Court judges were female, but the announcements made since Lord Thomas's speech takes this to 23.

As of 1 April this year, 23% of circuit judges were female. Our graph below shows the trend since 2005. 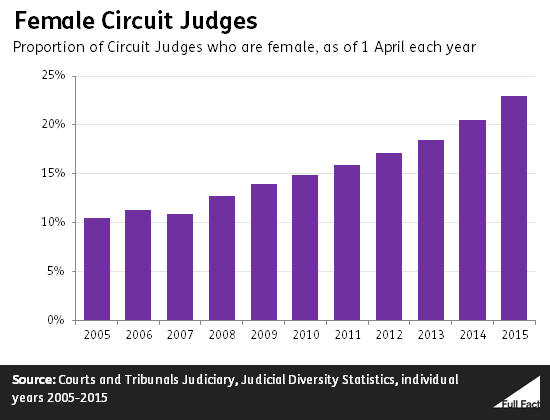 "As to Deputy District Judges, there has been a particular increase in the proportion of women among them from about 25% to 37% in the past 10 years"

Again, crunching the numbers shows that the increase from 25% to 37% over the decade is spot on, although the trend has been uneven: 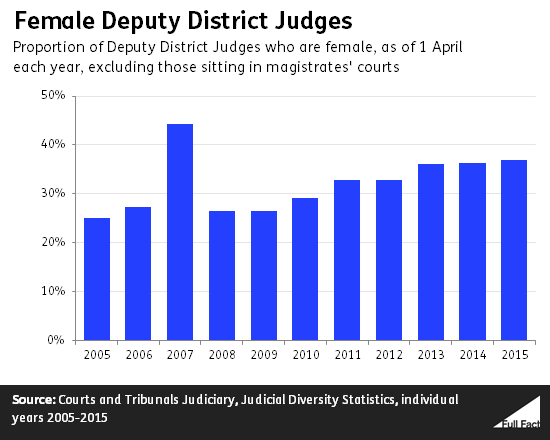 The other major entry-level position mentioned is that of Recorder. Recorders are part-time criminal judges and the current President of the Supreme Court started as one.

Lord Thomas said that as new appointments to Recorder positions were about to be announced, he couldn't comment on those. But that doesn't prevent us for looking back over the past 10 years, as we've done for the other types of judge.

The picture when it comes to the proportion of Recorders who are women is less positive from the point of view of increasing female representation. It's up only slightly from 2005, and has actually declined since 2013, from 17.4% to 16%. 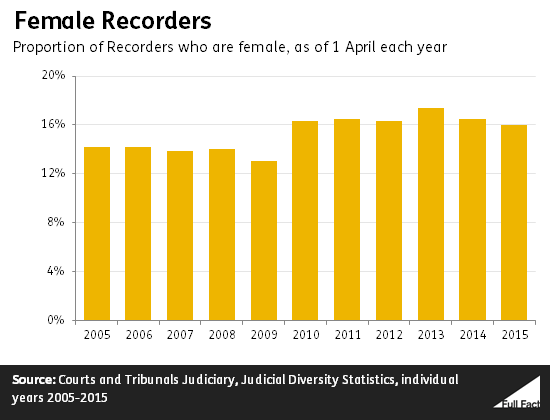