Full Fact is a registered charity. We're funded by people like you, by charitable trusts, and by other funders. All the details are on this page.

Our running costs consist mostly of paying staff and renting office space in London. In 2017 these were about £678,000 and in 2018 we expect our costs to reach around £865,000. We have the usual overheads of a small organisation, from computer equipment and internet connections to doing our accounts. We are based in London so that we can meet with central government and major media outlets without the expense of constant travel. We'd like to thank everybody who donates and makes our work possible.

We have rigorous safeguards in place at every level of our organisation to ensure our neutrality. These have been carefully constructed based on advice from our board and examples ranging from Amnesty International to the BBC. They include the cross-party board, fundraising safeguards, a conflict of interests policy, restrictions on staff political activity, feedback processes, operating guidelines, external reviews, and more. Most importantly, they include carefully recruiting staff who are sensitive to these issues.

Ultimately, it is for our audience to judge for themselves whether we succeed - we would encourage readers to judge our individual fact checks and our body of work as a whole. We provide links to all sources so that you can check what we’ve said for yourself.

We work with a wide range of organisations such as Facebook, First Draft News and the International Fact-Checking Network to build and distribute educational tools to help people to make up their own minds about fact checking. These organisations do not contribute towards our editorial policy and do not influence who and what we fact check.

We depend on individual donations and we would like to thank the thousands of people who have supported us. You can donate at fullfact.org/donate.

We are very grateful for the support of our readers, who donate thousands of pounds to Full Fact every month. We ran our first ever crowdfunding campaign to help us fact check the 2015 general election, which raised a massive £33,000.

For the EU referendum, we ran a crowdfunding campaign, which raised £43,260 from 1,371 people. We have also received £61,727 of individual donations from members of 38 Degrees, whose members voted for 38 Degrees to stay neutral and support independent fact checking. Thank you all.

To help us fact check the General Election 2017, we ran another crowdfunding campaign which raised £100,263 from 1920 supporters. This included the Nuffield Foundation kindly awarding Full Fact £40,000 as part of their work to ensure that public debate is informed by ‘independent and rigorous evidence’.

The Nuffield Foundation is a charitable trust, whose aim is to improve social well-being through education, research and innovation. They do this by funding research and innovation in education and social policy, and building research capacity in science and social science.The Nuffield Foundation was one of the earliest funders of Full Fact and funded our 2015 Election Centre.

You can help Full Fact grow, and check more facts, by donating.

We are grateful for the support we receive from the following charitable trusts and individual donors:

Our 2017 corporate supporters are listed below. To find out more about joining our membership scheme, and what Full Fact can offer your company, click here.

In 2016 we received £10,000 from the Economic and Social Research Council, with £10,000 more arriving in 2017, and £20,000 from the Office for National Statistics to set up the Need to Know project. We received £37,900 in research funding from the University of Edinburgh as part of its project: “Citizens’ Expectations on Brexit Outcomes: ‘Fact’ Transmission and Persuasive Power in a Digital World”, with two thirds of that arriving in 2017, and the last third in 2018.

This chart shows our income for 2017. 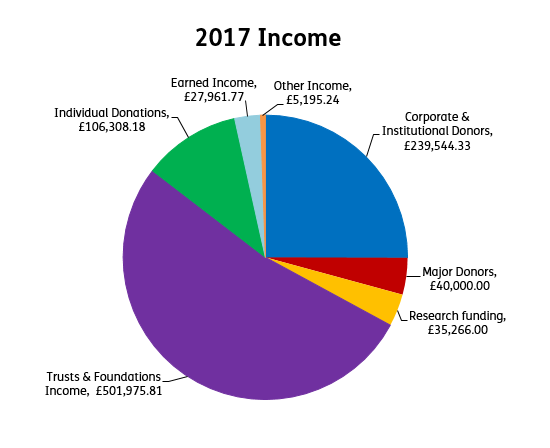 If you have any other questions about our funding you can see our full accounts for each year at the Charity Commission’s website or get in touch with us at team@fullfact.org

Our web hosting is very kindly provided by Bytemark Cloud Servers. We like Bytemark so much that we were paying for their services. Then Matthew Bloch, their Managing Director, saw us on BBC Question Time and emailed to say they would stop charging. It was a lovely message to receive, late at night after a hard evening’s work. Now they’re making it possible for us to run an ever larger and more complex site with no fuss and completely free.

Facebook have donated £50,000 worth of advertising credits to Full Fact for the 2017 election as part of their commitment to tackle False News. Facebook does not have any say in how we spend them.

Twitter have donated £5,000 worth of advertising credits to Full Fact for the 2017 election. They do not have any say in how we spend them.

We also benefit from a general Google Grants scheme for charities which provides $10,000 worth of Google advertising per month. They do not have any say in how we spend them.

If you've noticed beautiful images on our site or social media, there's a good chance they were donated by Alamy, the world's largest online stock photo agency. After meeting their CEO James West by chance, he immediately saw how much timely relevant images would make a difference to us. Within a week Alamy gave us an amazing Christmas present—access to their 90 million images to help make sure the facts stand out from the noise.

Thanks again to all our supporters. If you'd like to join them, check out our donate page here.