“There are 1.5 million Brits employed in EU citizen owned businesses in our country”

The figure for the number of employees is correct, rounded to the nearest half-million. In 2014, about 1.6 million people in the UK were employed by businesses that were EU-owned, or by businesses whose parent company was EU-owned.

One of Mr Umunna's colleagues told us that these figures were released in response to a Freedom of Information request, so we contacted the Office for National Statistics to ask whether the figures might have changed substantially since they were released. It told us that the figures would vary year-on-year, but that there was unlikely to have been a substantial drop since 2014. So it seems fair to assume that the figure would still be similar now.

1.6 million employees is equal to about 5% of the 28 million people employed in the UK as a whole.

We haven’t seen any figures which tell us the nationality of employees of EU-owned businesses, so we don’t know how many of these 1.6 million people were British.

Net migration equals a city the size of Cardiff

“We’re adding to the population of this country at the minute, the United Kingdom that is, a city the size of Cardiff every year from immigration alone.”

Net migration was 327,000 people for the year ending March 2016. This is the estimated increase in the overall population of the UK when you compare the number of people coming to live in the UK and the number going abroad.

This is a type of claim we’ve seen before and there are several towns and cities that could be used for comparison: Wakefield, where the population is around 334,000, Belfast where it’s 339,000 or Wigan where it’s 322,000.

But net migration isn’t at this level every year. It’s been increasing and has been at roughly record levels since 2015.

In 2014 net migration was around 243,000 people, or roughly a population the size of Swansea or Salford.

There is a large margin of error in these migration figures as the number is estimated from surveys taken at the main air and sea ports and routes into the UK.

Unemployment in Wales is the lowest in the UK

In Wales the unemployment rate was 4.1% between May and July 2016. This means that around 63,000 people between 16 and 64, who were available for or seeking work, did not have jobs.

Unemployment across the whole of the UK is at 4.9%. This means that 1.63 million people were unemployed.

Wales does have the lowest unemployment rate of any of the four nations of the UK. Northern Ireland had the highest with 5.6% unemployment.

The only regions of the country with a lower unemployment rate than Wales are the East and South East of England. The highest rates of unemployment were found in the North East, the West Midlands and London.

“[The Conservatives] were the party that introduced employment tribunal fees which prevent workers from getting justice when treated unfairly at work.”

Fees for employment tribunals were introduced in July 2013 by the Conservative and Liberal Democrat Coalition government.

A person looking for compensation for, say, unpaid wages or unfair dismissal, has to pay between £400 and £1,200 to have the case heard. There are other fees which might have to be paid depending on the case, and these could be up to £600. To appeal a tribunal decision costs £1,600.

Before that, there was no fee to take a case. The government said this needed to change to “encourage early resolution of workplace disputes and in order to transfer some of the cost burden from the taxpayer to the users of the system”.

Tribunal judges have the power to order the employer to reimburse fees if the person taking the case is successful. There’s also a “fee remission scheme” to exempt people on low incomes. Around 40% of all fees paid were either fully or partially reimbursed last year.

The number of cases taken has fallen sharply since fees were introduced. The House of Commons Library says the continuing low level of claims may also have been affected by a conciliation scheme introduced in May 2014. 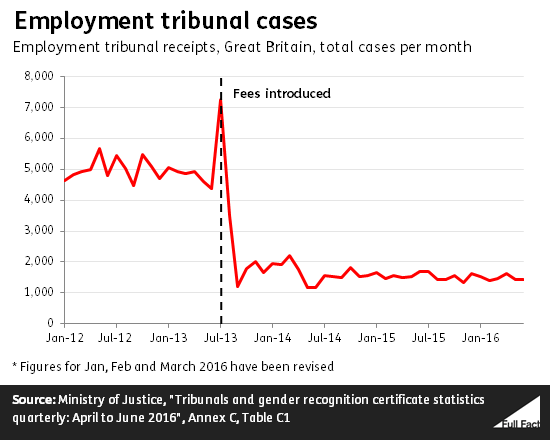 More refugees in the EU are Syrian than any other nationality

“If you look at where most of the refugees within the European Union have come from, it is Syria”

There are at least three possible ways of looking at refugees within the EU. Syrian citizens make up a majority on the most obvious measure, although not on others.

Syrians make up 28% of the migrants crossing the Mediterranean by sea in 2016, according to the UN refugee agency. So not the majority, but it was more than any other nationality.

The year before that an estimated 48% of those making the crossing said they were from Syria.

Of those who made an asylum application in the EU for the first time, around 30% were Syrian between January 2015 and June 2016. Again, that’s far more than any other nationality.

Finally, take people actually granted refugee status in the EU. Here a clear majority of people are Syrians: 58% since the beginning of January 2015. And that’s not counting around 11,000 Syrian refugees who have been brought over directly from the Middle East by EU governments.