Has the public really had enough of experts?

“I think the people in this country have had enough of experts... from organisations with acronyms saying that they know what is best and getting it consistently wrong."

This quote, from Michael Gove, was probably one of the most controversial statements of the EU referendum, prompting plenty of experts and commentators to take to the broadsheets in defence of their expertise.

This was the question for discussion at the Institute for Government’s event this week: “Has the public really had enough of experts?” Our Director Will Moy was on the panel alongside Deborah Mattinson, founder of Britain Thinks, Hetan Shah, CEO of the Royal Statistical Society, and Oliver Wright, Policy Editor of The Times. The event was chaired by the new Director of the Institute for Government, Bronwen Maddox. 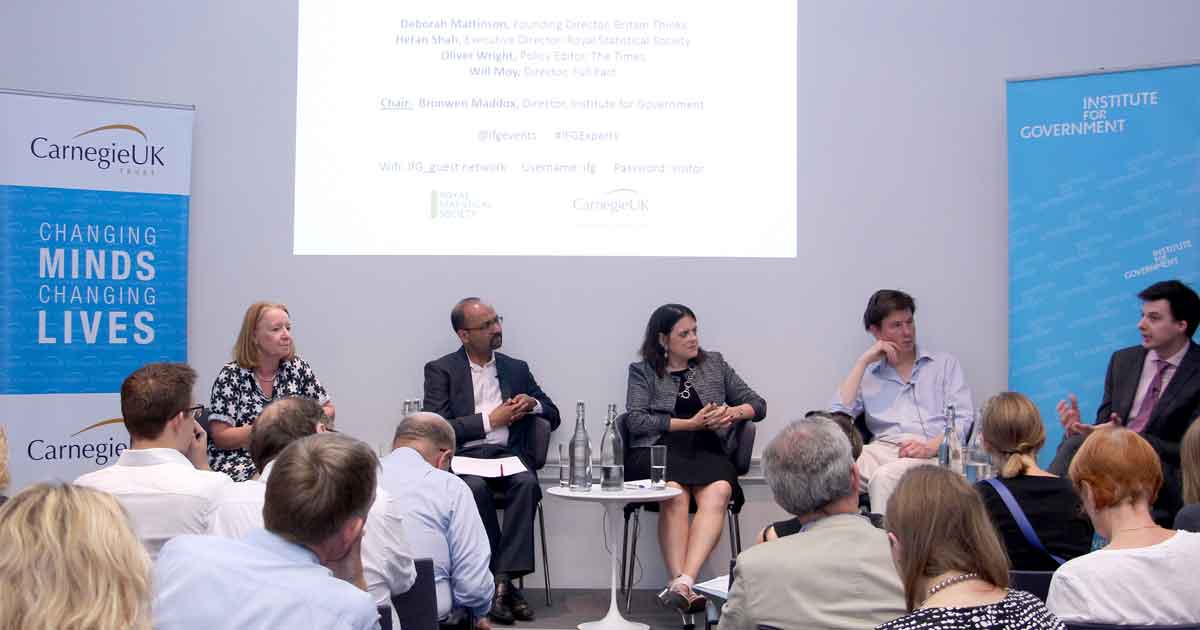 Each panellist gave their analysis, speaking from their area of expertise. Hetan Shah pointed out that according to polling by Ipsos MORI, trust in experts remains high. In particular research by NatCen found that 68% of people trust the Office for National Statistics to produce reliable statistics — it’s just that 69% of people don’t trust politicians to use them well.

Trust is an important foundation in public debate. So we were delighted when Oliver Wright said, “Organisations like Full Fact, when they started off, were a complete culture shock to newsrooms across the country...but actually, over the long run, it’s made us all think a little bit harder that when we get a press release... perhaps we need to be a little bit careful, about taking their “facts” for granted.”

Deborah Mattinson argued  that  facts did cut through in the referendum; people just don’t agree about which facts matter. She said that even though people understood that leaving the EU would have a negative effect on the UK economy, but they didn’t connect it to their own personal finances.

For facts to matter, they have to mean something to people. Full Fact does a lot of work with expert organisations, and Will had two main observations from the EU referendum.

Firstly, there was real demand for trusted, reliable information during the referendum. This was evident from the huge spike in demand for Full Fact’s work, from the media and from readers, as well from comments from people up and down the country.

Secondly, some experts did outstanding work in trying to connect with the general public — the UK in a Changing Europe group and the network of top law academics we worked with this year showed real commitment to public engagement.

Trust isn’t built in a day

But for experts to communicate effectively, they have to have already earned a reputation for trust and authenticity. People aren’t sick of experts, they’re selective about who they place trust in.

The single most trusted person on the EU referendum was, according to Ed Miliband’s former pollster, Martin Lewis — otherwise known as Money Saving Expert. Why? Because for years he has proven himself to be credible, authentic, and identifiable. He has a reputation for for being on your side. How many public experts pass that test?

As Will said, “You can’t parachute experts in mid-debate without building their political capital in advance”.

Watch the whole of the event below

As Will has written elsewhere, part of the problem about public debate in the EU referendum was that the conversation happened in terms that didn’t reflect individual people’s realities. Take the debate about immigration, for example. Whenever Full Fact was asked on television or radio about immigration, the question was: “Is immigration good for the economy?” The consensus on this question is that the research is mixed, but most studies agree that the effect of immigration on public finances is small, and probably positive. Case closed.

Except this kind of analysis ignores the people for whom immigration has a greater impact. If you’re a in a low-skilled job, it’s more likely that you’ll lose out from increased immigration. If experts only present the overall picture, without reconciling these different realities, it’s not unreasonable for the public to reject the analyses on offer.

It's gaps like these that Full Fact is seeking to fill well ahead of the next general election. We’re currently working on a project with the UK Statistics Authority, the ESRC, and the House of Commons Library to identify the public decisions that will be made over coming years. The questions we want to answer are: do we have data to inform these decisions, has it been clearly analysed, and has it been well communicated? Doing that before the issues become contentious will build the foundations of an informed debate, and a debate where experts are involved from the beginning, not just parachuted in in the middle of heated debates.

Image courtesty of Institute for Government.

We've updated this piece to source the full quote from Michael Gove. Previously it read “People in this country have had enough of experts.”

Wanted: "An honest and responsive government"

Introducing the Need to Know project