Wanted: "An honest and responsive government"

What are the things that matter most to you? A good education? Better healthcare? Access to clean water?

These are three of the most popular answers in the UN’s 2015 MY World consultation. Nearly 10 million from around the world voted for the six issues that they care about most, from a list of 16 options.

It’s not a representative survey, but the UN says it’s a global vote “allowing people for the first time to have a direct say in shaping a better world” and helping to define the next global agenda for tackling extreme poverty and preserving the planet.

Top of the list, across all ages, genders, education levels, and wealth was ‘A good education’. No surprises there, perhaps. But you might be surprised to learn that in fourth place, ahead of affordable food, access to clean water, and protection against crime, is ‘An honest and responsive government’. This is defined by the UN as:

“This means that governments should be effective, transparent, accountable and not corrupt. People should have a say on what the government’s priorities should be, and have confidence that they will implement those priorities competently. Governments should agree and implements standards for making information available to all people on how public money is spent.”

The only group across all demographics where people thought having an honest and accountable government was less important than having affordable food was the under 15s. 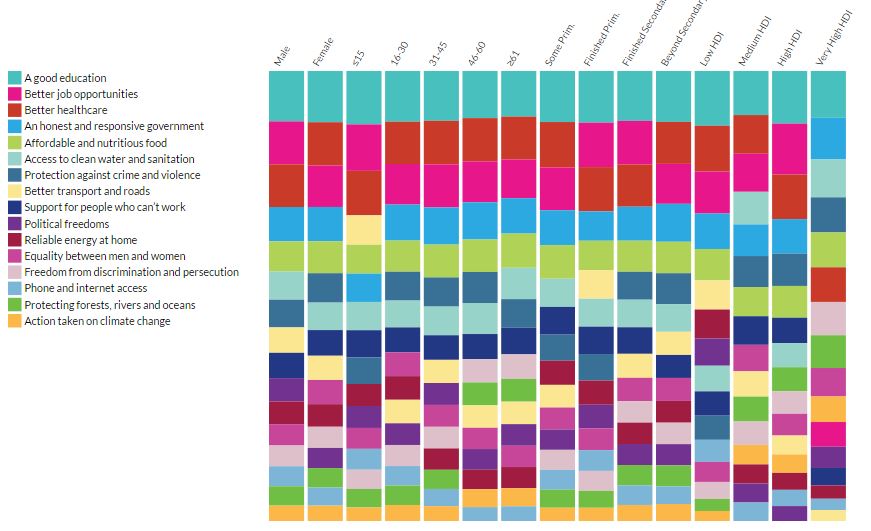 The last sentence of the UN’s definition resonated with our work: “Governments should agree and implements standards for making information available to all people on how public money is spent.”

So much of what we do is work behind the scenes to help the government and other information providers to implement standards that improve the accessibility and clarity of their data.

To take two examples, we worked with the Government Statistical Service to redesign their spreadsheet guidance, and last week our Director Will gave evidence to the Public Administration and Constitutional Affairs Committee about the effectiveness of government accounts.

At a time when trust in politicians is languishing at low levels, it’s more important than ever to give people accurate, reliable and impartial information with which to make up their own minds.

We know from the huge support we’ve received (whether that’s our crowdfunder, celebrity endorsements*, or nice things on Twitter) in the past years that people care about getting things right, and correcting them when they’re wrong. It’s nice to know that people around the world feel the same, too.

You can vote in the UN MY World consultation here.

*Here’s another one from Andy Murray.

Has the public really had enough of experts?