£5,000: The true cost of the The Twelve Days of Christmas 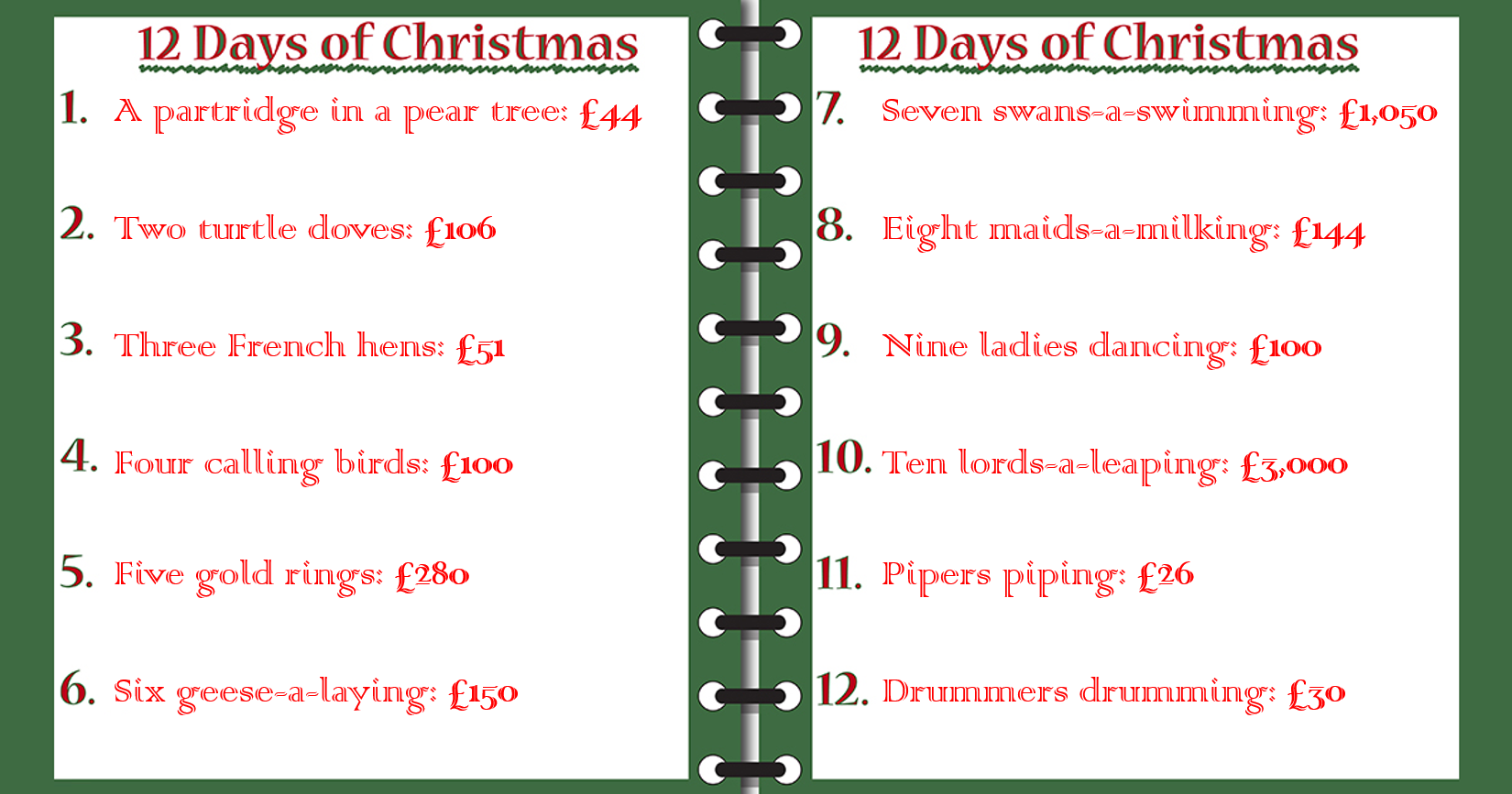 During a recent carol performance, our attention was drawn to a number of notable claims that seemed to severely lack context.

The rendition of The Twelve Days of Christmas, in particular, saw the carolers make a series of extremely bold promises.

Could these singers seriously claim, with a straight face, that their true love had delivered them an increasingly large and ostentatious array of gifts over a twelve-day period from Christmas Day onwards?

We decided to look into the numbers behind these claims, and provide some guidance, should you decide to replicate this gift strategy for your own true love.

So, in the spirit of both Christmas and providing high-quality public information, we estimate that purchasing every gift in The Twelve Days of Christmas this year would set you back around £5,000. And that’s without factoring in the emotional toll of privately procuring everything from a partridge in a pear tree to 12 drummers drumming.

(Please note: we have not interpreted the carol in its traditional cumulative form. This means that on day two, for instance, you would only be expected to provide two turtle doves, rather than two turtle doves and a partridge in a pear tree).

It depends what you mean by partridge here.

If you don’t mind it being dead, you can pick up a partridge for under a fiver online (it’s cheaper if you keep the feathers on). We’re going to assume, however, that you’ve decided not to present your true love with a dead animal hanging from a tree. Otherwise the first day of Christmas will probably also be your last together.

It seems possible to get a living, UK-based partridge for around £20 online (although prices can increase depending on the variety). Most seem to require picking up, which means petrol costs could be a significant extra expense.

When looking at spending figures, it’s also important to factor in long-term trends. Although the short-term cost of buying a partridge may seem reasonable, if you keep your partridge beyond a single day, be sure to factor in feeding and veterinary costs. At the very least you’ll need to buy a bag of feed, so that’s another £4.

As for the pear tree, these seem to start at around £20 online, including delivery.

Back in the late eighteenth century (when the Twelve Days lyrics were first printed) someone looking for two turtle doves would have been able to shoot them during their migratory visits to south east England in the summer months. However, such practices are now banned in the UK and much of the EU.

We haven’t been able to find any turtle doves for sale in the UK, but two turtle doves from America cost around $130 (about £100 based on recent exchange rates). EU import tariffs on live pigeons (there are no strict divisions between the definitions of pigeons and doves) are 6.4%, adding another £6 or so to the total cost.

There would likely be significant shipping and veterinary costs to get these doves to the UK (as well as the need to, again, actually feed your birds), so be sure to factor these in.

We’ve located Copper Black Marans hens for sale in Durham for £17 each (£51 for three). Had the poem’s lyrics dictated that you needed a higher quantity of hens, you could have made savings buying in bulk when purchasing four or more.

Importing hens from France wouldn’t have been a problem for Christmas 2018, though you might have missed the delivery deadline by now.

However, should 2019 bring a no deal Brexit, French hen importers could face both additional tariffs and non-tariff regulatory barriers by Christmas 2019, potentially increasing the cost of said hens significantly.

On the fourth day of christmas we are presented with a lyrical ambiguity, as not all sources agree on whether it is four calling or colly birds that you are required to provide.

A calling bird isn’t a species—it’s simply a bird which calls, or in other words, a songbird, accounting for about half of all bird species.

We’d opt for a set of canaries at roughly £25 each.

For £56 each, you can’t complain with these offerings from Argos. While the price of gold has been decreasing recently, it’s still at close to historic highs meaning even the most basic gold rings will still hit the pocket fairly hard.

Of course you could get creative with your interpretation of the promise and bag this board game for only £23.

It’s easy enough to buy your true love six geese. For a half-dozen mature birds, you’re looking at around £150.

But geese don’t lay all year long. They start in spring, unless there are exceptional weather circumstances and their biological clocks go a bit haywire.

The Met Office says temperatures this Christmas will be around average—so they’re not going to be geese-a-laying until February at the earliest.

Seven swans-a-swimming (£1,050—assuming you own a home with a significant water feature)

Please don’t procure yourself any mute swans—it’s illegal to keep this variety under the terms of the 1981 Wildlife and Countryside Act—or else you’ll be looking at significant legal fees on top of the cool grand you spent on acquiring your avian contraband.

So let’s assume you’ve picked up seven non-mute swans at the same time as your other birds, meaning there’s no need to factor in additional petrol costs. The next question is: how the hell are you meant to get them swimming?

One source suggests that almost 250,000 UK homes contain a private swimming pool. This seems surprisingly high to us and we would like further clarification. But even if we take that as correct, that puts your home’s chance of having a swimming pool at 1%, based on the total number of dwellings in the UK. Regardless, swans should not be kept in swimming pools.

All in all, you’re probably better off swallowing your pride and just finding a pond with some swans you can look at. There are an estimated 100,000 or so swans in the UK, so with a bit of searching you should be able to find seven.

At this point we are confronted with another possible ambiguity in the lyrics. The song posits that the maids alone constitute the eighth day’s gift—but also specifies that the maids are “a-milking”. The assumption here, presumably, is that the recipient already owns sufficient milk-producing animals.

Today there are around 140,000 full-time farmers across the UK, so in all likelihood you don’t own a dairy animal. As such, you may have to provide one in addition to the maids.

Of course, these needn’t be cows. Other milk-providing animals include goats, sheep, camels, yaks or potentially cockroaches. As the procurement of one of these animals is likely to be a significant extra expense, we instead suggest taking eight willing maids to a “milking experience”, where they can try milking a dairy goat for £18 each.

If you do have a dairy animal to hand, you’ll need to pay the maids a wage for milking them. Office for National Statistics (ONS) data says the median gross hourly wage for a part-time worker in “agricultural and related trades” is £8.50 an hour. This is the same as the wage offered in some job adverts for a milker.

However as the eighth day of Christmas is new year’s day—a bank holiday—you may have to pay your maids a higher wage than this.

Time to dig out that ONS spreadsheet on average wages again.

The median gross hourly pay for part-time dancers and choreographers in 2018 is about £11. That means it should be feasible to hire nine female dancers for one hour for around £100.

Members of the House of Lords are paid a daily allowance for each “qualifying day of attendance” at Westminster, so should be pretty easy to employ at a competitive rate. This can be up to £300, although they can claim a reduced rate of £150 or nothing at all.

This is all assuming that peers of the realm don’t charge additional danger money for leaping.

There are currently 583 Lords, which is good news for your negotiating hand as it offers a you a very large potential market to barter with. If you are looking for high-quality leapers, you may want to approach Lord Coe and Lord Campbell of Pittenweem—both of whom are former Olympic athletes.

It’s the fourth day of January.

You’ve remortgaged the house and maxed out the credit cards. The swans have attacked the turtle doves. Your gold rings have been lifted by—you believe—the lords a-leaping, who, in combination with those dancing ladies, have absolutely wrecked your shagpile carpet.

The last thing you want to do is privately procure 11 pipers piping.

“Love, for your eleventh present, two tickets to see the London Symphony Orchestra next Saturday.”

The LSO has two flautists, one piccolo player, three oboists, four clarinetists and four bassoonists, so really it's 14 pipers piping for the price of 11. And they only set you back £26 (assuming your love still wants to spend the evening with you).

We’re tired of writing this. We’re getting incessant tailored adverts for fowl merchants and orchestral spectaculars.

And you are almost certainly tired of this format too. So we’re taking the same shortcut as yesterday. Minimum fuss. You’ve bought tickets for the Yamato Drummers of Japan, who are touring the UK in February and March. It’s £15 per ticket, and you get 16 drummers when you only needed 12.

Merry fact-ing Christmas. Next year, heed the words of Mariah Carey instead.

Five ways Full Fact has made a difference this year