Bank of England aims at the general public, and scores

The visual summary is aimed squarely at an everyday audience. There are bite-sized pieces of information, no jargon, and the sentences are short. 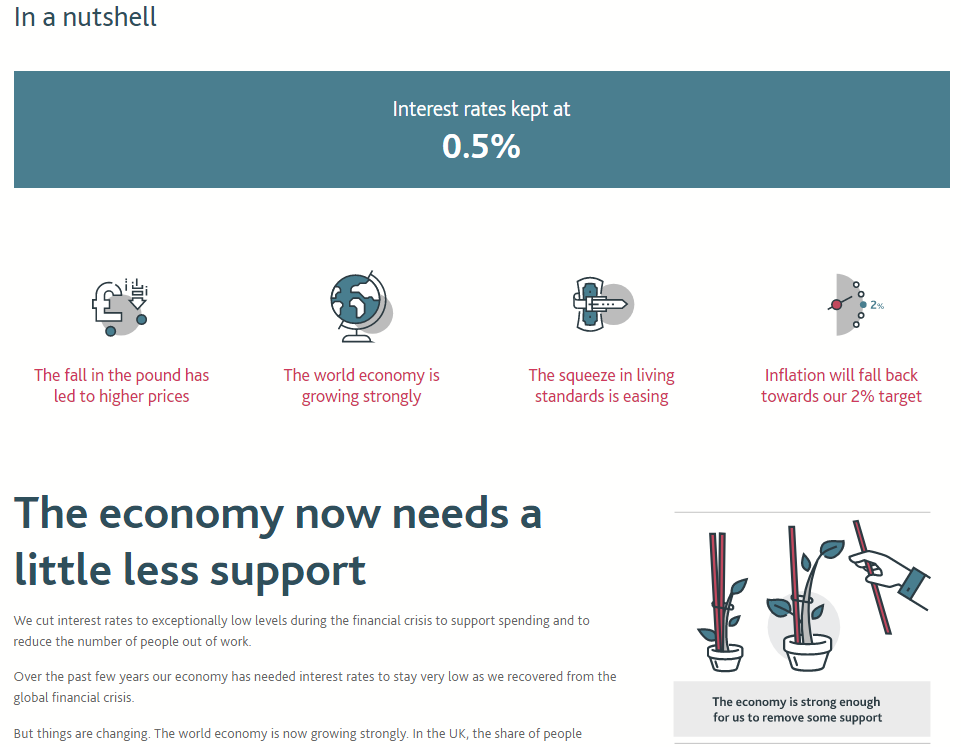 Full Fact has been campaigning for better communication of public and political information to non-expert audiences for years.

In 2013 we told a committee of MPs that the public was “the big missing audience” in data production and that there should be more emphasis on serving non-experts as well as mediators like journalists, not just existing expert users.

In 2014 we proposed to the Speaker's Commission on Digital Democracy that any amendment to legislation going through the Houses of Parliament “should be accompanied by plain language description of its effect”.

Since then we’ve emphasised this message at every opportunity and worked hard to support public institutions that are serious about taking up the challenge of communicating well to the general public.

We speak at inductions for junior government statisticians, where we talk about the importance of clear, consistent communication of statistics, and tell stories of what happens when data is presented confusingly or with insufficient context—the factchecker’s bread and butter.

We regularly provide detailed feedback on explanatory text for websites or PDFs that accompany spreadsheets. We even helped the Office for National Statistics to produce a guide to releasing data in consistent and clear formats.

We’ve hosted numerous secondments to help civil service analytical staff understand how information is used in the cut and thrust of public debate and improve how they communicate to a public audience.

Since October we’ve proudly hosted our first Bank of England secondee. Hannah has been embedded in the factchecking team, bringing her experienced eye to factchecks on topics like the size of Scotland’s deficit, universal credit, and budget forecasts.

In 2016 our Director Will Moy spoke at the Bank of England in support of the Bank’s change programme, which emphasises clearer communication.

The year before the Bank had published an interesting and important but 100-page long analysis of the impact of immigration on wages. It ended up being turned into an inaccurate soundbite (see our factcheck).

Will talked about this, pointing out that other organisations summarise their key messages and state clearly and prominently how these can and can’t be used.

It’s great to see the Bank now making their main messages much easier to find and understand.

Reflecting on our written evidence to the Public Administration Select Committee in 2012, the world of public information has come a long way since we answered the Committee’s question, “How well are opportunities afforded by the internet being exploited in the publication strategy for official statistics?”

“The opportunities afforded by the internet include the ability to reach the public directly; ease of searching; speed of publishing; interactivity and engagement; informative visualisation; being responsive to current debates and concerns; easy cross-referencing between information; personalisation; provision of detailed explanations at miniscule marginal costs and the ability to make large datasets easy to interrogate. So far few of these opportunities seem to have been explored, alone exploited.”

The Bank of England should be proud about setting an example.