Ukraine and beyond: How to fact check misleading videos

Since news broke that Russia had invaded Ukraine, we’ve checked a number of videos claiming to show the war unfolding.

Here’s our quick, beginners’ guide to how you can do that.

The first thing to ask yourself is: does this seem plausible? While that might be hard to answer during something as unpredictable as an invasion, there are still things that you can look out for. Does anything in the footage seem obviously out of place?

We checked a video on Facebook claiming to show “#Russia #Ukraine #WorldWar3”. But there was something distinctly wrong with it. 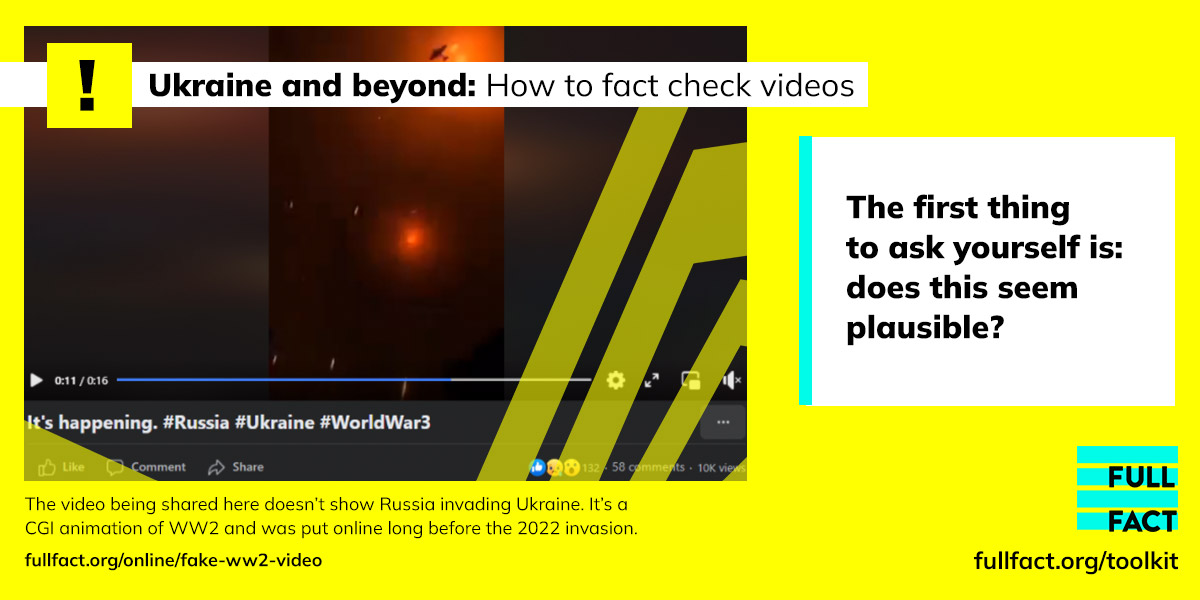 The planes you can see in the image don’t look modern, making the whole scene look more like WW2 than modern-day Ukraine.

There’s your cue to start the next stage of verification—trying to find the original version of the video so you can be certain on whether the caption is telling the truth.

This (honestly) isn’t as hard as it sounds.

Even if you can’t see something as obvious as planes from the wrong era, the video itself is likely to contain a number of other clues that can help you decide whether it’s real.

In the above example, we started searching for World War 2 videos, before eventually coming across the original video by an animator on TikTok.

Another video we checked claimed to show a fire started by a Russian airstrike in Ukraine (a screenshot of this appears below). 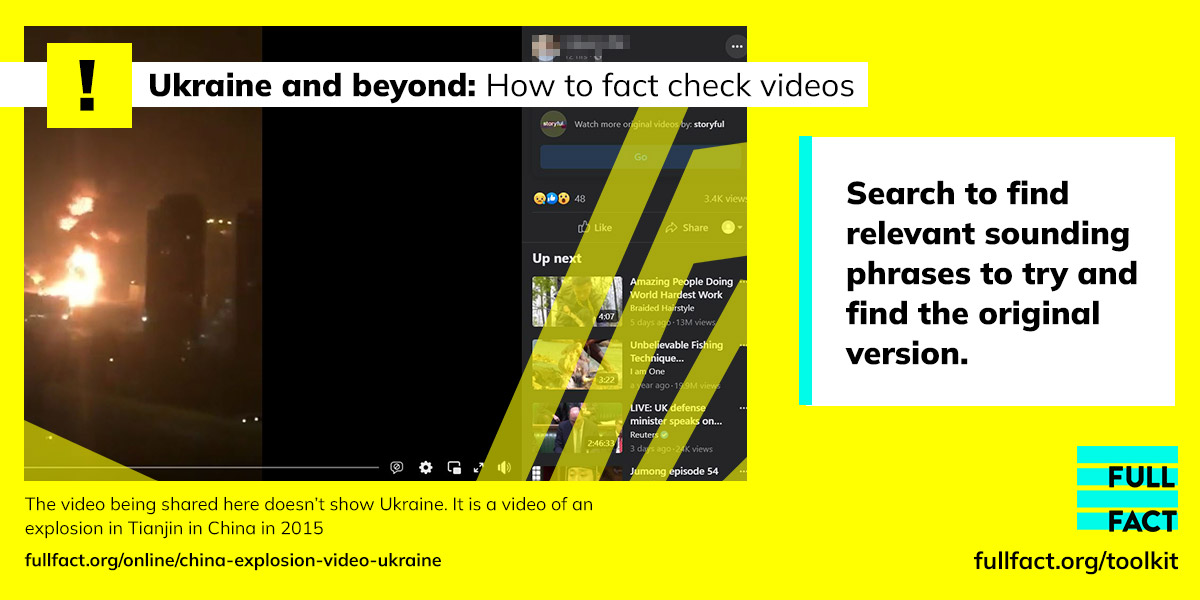 Your next step is to start searching relevant sounding phrases to try and find the original version.

You can do this on Google, but it can also also help to search places like Twitter and TikTok.

If we continue with the above example of the ‘fire started by Russian airstrikes’, that we presume was witnessed by an American, these were the steps we took.

Often this kind of searching isn’t enough. Although you can’t reverse video search on Google, like you can to verify where images come from, you can do something similar using still images of key parts of the video.

We use a free Google extension called the InVID Verification Plugin to do this pretty quickly. 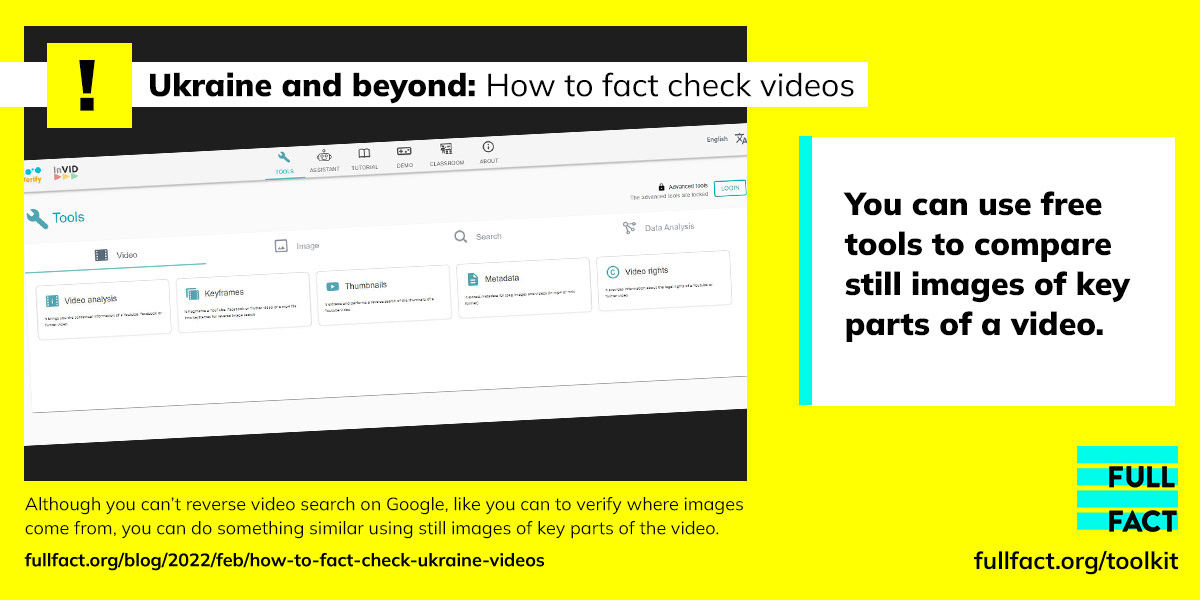 Once you’ve added the extension, click ‘Keyframes’. This allows you to input the URL of the video, and then it chooses a few different screenshots from the video and automatically lines them up in order to reverse image search.

If inputting the URL doesn’t work, you can also upload the video file, and get your screenshots that way. This may be useful if you’ve been sent the video file on Telegram or WhatsApp for example, and don’t have a link.

If you need to download a video from Facebook in order to do this, there’s an easy way to go about it. First, replace the “www” in the Facebook URL with “mbasic” and then refresh the page.

You will then see a really old-fashioned version of Facebook, but if you click on the video, it will open in a new tab. 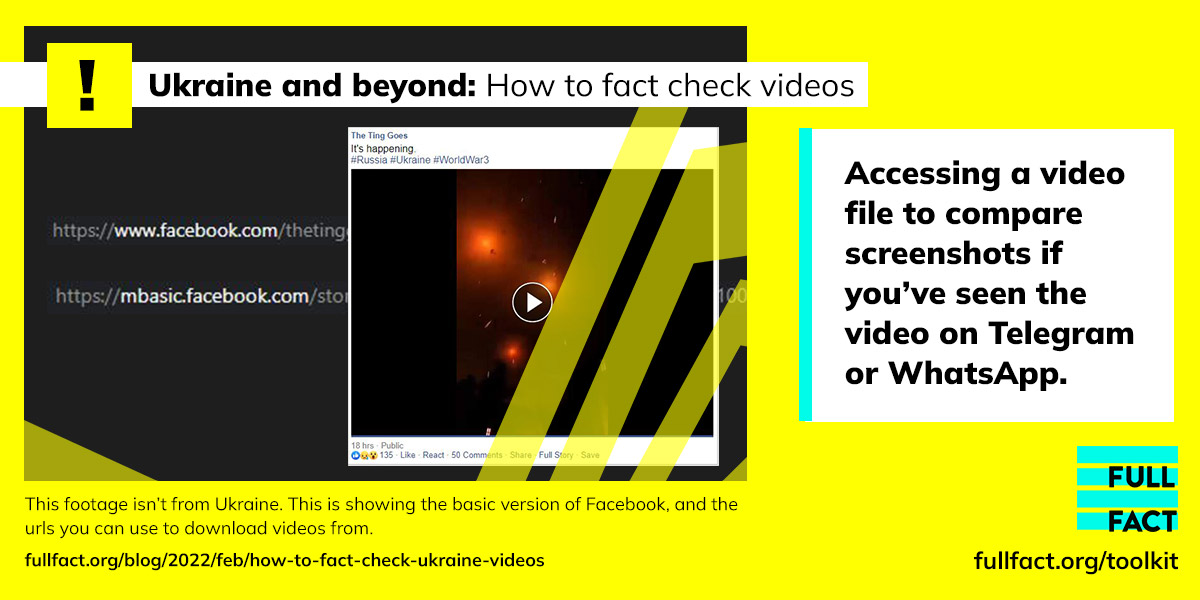 Then you can right click and select ‘Save video as’. After that, just upload the clip to the InVid verifier and it will create your screenshots.

Performing a reverse image search on these screenshots is a cornerstone of verifying video. You can use Google to do this, but it’s also worth trying alternative search engines like Tineye or Yandex too.

If you want the screenshots of a YouTube video, you can also use Amnesty International’s free Youtube DataViewer tool, which does the same thing. 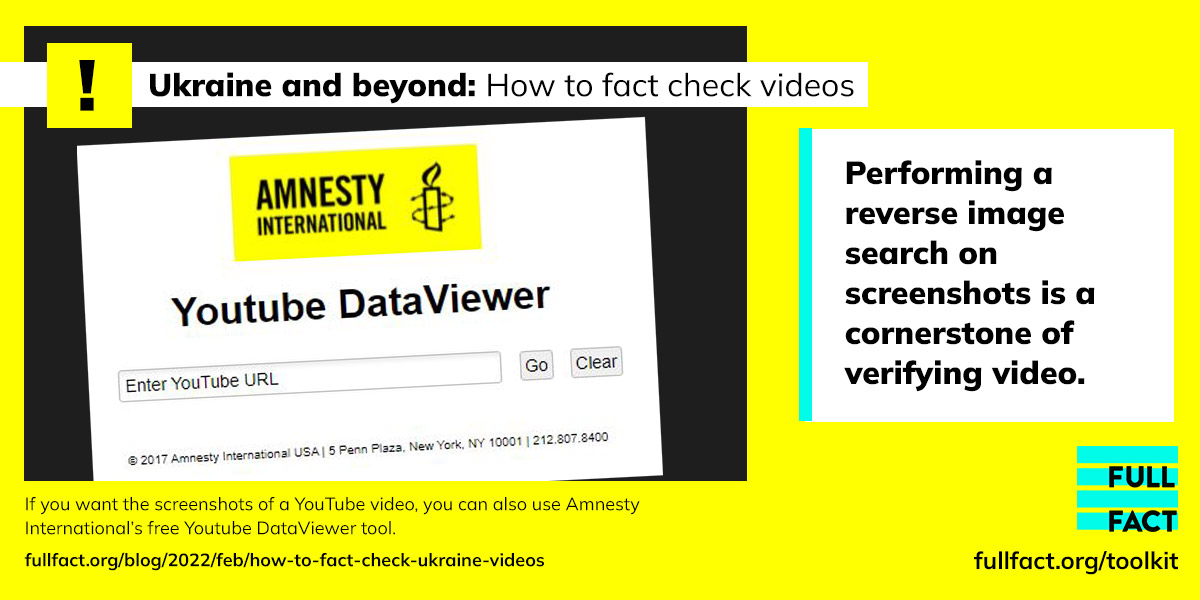 Metadata
‘Metadata’ is the information about a digital picture or video that you can’t immediately see from viewing it. When you take a picture using your phone, your phone saves information about it, including where you took it, when, and the make of the phone. This makes up the metadata.

Usually, when you upload that picture or video to a social media site, most of that metadata is stripped out. So checking the metadata using a site like Metadata2go may not yield results, but doing that on a video you receive on Telegram or Whatsapp may do. The Poynter Institute has a good guide to metadata here.

Read the comments, critically
Checking the comments of a video can give away other clues. Although you shouldn’t trust what people are saying in the comments without further scrutiny, it may lead you down the right path. Sometimes commenters will also provide evidence to support what they are saying that you can follow up on.

Follow fact checkers
We’ve checked lots of videos claiming to be taken in Ukraine during the invasion, and going straight to fact checkers to see if they’ve already checked something is a great place to start. When we reverse image search screenshots for example, it often leads us to a fact checker writing in another language who has already verified the clip, but which we never would have found through searching words in English.

You can also find a list of some other fact checkers around the world on our Toolkit page.

Further reading
This has been an introductory guide to the process of verifying video. We haven’t even touched on things like geolocation, which is working out where a video was taken to help decide if it is genuine. This is particularly useful when you’re trying to work out whether a video is definitely real, rather than definitely fake, which is what we’ve focussed on here.

But if you do end up using some of these tips, remember, video verification is a skill not a talent—it takes practice and maybe some training, not an innate ability.

We recommend reading the guide from Bellingcat if you want to learn more.

And if none of the above works, you can always send us things you suspect might be fake via WhatsApp or get in touch via our website.