Cannabis kids: are more under-18s being prosecuted for supplying the drug?

More under-18s are being prosecuted for selling cannabis while the number of those aged 18 or over prosecuted has fallen.

Correct, in England and Wales. The number of 10-17 year-olds prosecuted between 2012/13 and 2016/17 increased, while the number of adults fell. Despite this many more adults are still being prosecuted overall.

We’ve not seen the evidence for this, though other data on the number of young people prosecuted for drug offences suggests it’s possible.

“Police catch 11‑year‑olds being used to sell drugs… More under-18s are being prosecuted for selling the drug [cannabis] even though the number of adult dealers taken to court is falling, a report has shown.”

We asked the Times for more information on its figures regarding 11-year-olds—which it obtained through a Freedom of Information request—but it wasn’t able to provide them.

Figures we’ve seen in the past suggest that children of a young age may be selling cannabis, as some as young as 12 are being used to transport drugs around the country. Figures provided to us by the think tank Volteface, which works on alternatives to current drug policies, also suggest this may be the case.

Volteface released a report this month looking at children and cannabis. It looked at the change in the level of prosecutions and convictions for the cultivation, possession and supply of cannabis, and of possession with intent to supply over the last five years. It then broke these down by whether the individual involved was under or over the age of 18.

Looking at prosecutions, the number of 10-17 year olds prosecuted for supplying cannabis over the last five years has increased, as the Times’ claim states. Although the numbers of people involved are relatively small so small changes can affect how the trend looks a lot.

At the same time the number of adults being prosecuted for the same offence fell.

Over the five years the number of prosecutions against young people increased by eight (or 15%) while the number against adults fell by almost 100 (or by 16%). Overall many more adults are being prosecuted than children, despite the fall in recent years. 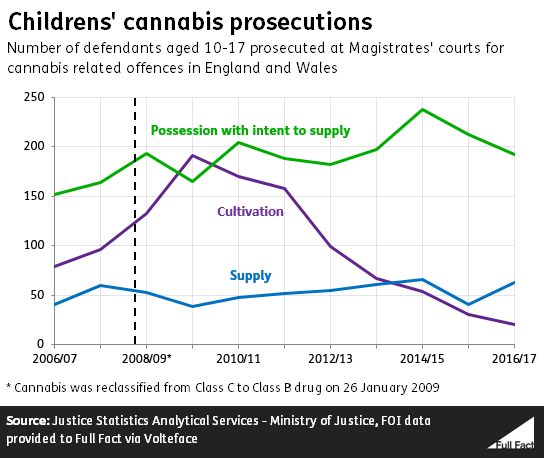 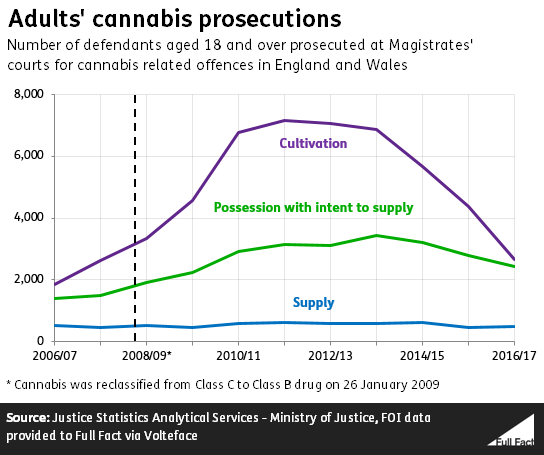 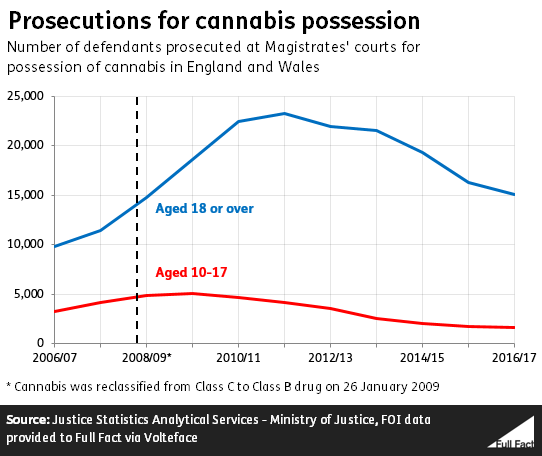 The number of people prosecuted for all other cannabis charges fell during that time—regardless of their age.

Convictions for children aged 10-17 have increased over the five years for certain cannabis-related offences, such as supply and possession with intent to supply. The number of convictions for supplying cannabis against adults also increased in that time. For all the other offences looked at, the number found of people convicted fell, regardless of their age.

Again, the numbers of convictions each year are relatively small, so small changes year-on-year can exaggerate how trends look over time.

The figures from Volteface, which originally came from the Ministry of Justice, may not show the complete picture as they only record the main offence that someone was prosecuted for or found guilty of. So if, for example, someone was facing a charge of supplying cannabis, but also a charge of murder, their cannabis charge wouldn’t be recorded in the statistics.