Cracking up: efficiency in the criminal courts

More than half of criminal trials in England and Wales have to rescheduled or called of.

"Across both magistrates and Crown Courts, almost 1 in 5 trials—17%—are "ineffective"—meaning the required court hearing does not happen on the day, often due to administrative issues, and needs to be rearranged.

Almost 2 in 5 trials—37%—are "cracked"—meaning the case concludes unexpectedly without a planned court hearing. Last year, there were more than 33,000 ineffective trials in our criminal courts.

One thing that both Michael Gove and the criminal lawyers protesting against his Ministry of Justice agree on is that the courts are under pressure.

When it comes to the number of criminal trials in England and Wales that are rearranged or don't go ahead after being scheduled, the minister's figures are spot on.

Interestingly, though, the numbers might lead you to think that things have actually improved over the past ten years or so.

In the Magistrates' Court, where most trials take place, 18% of trials were "ineffective" last year—meaning that they didn't go ahead on the planned date. That's down from 29% in 2003, according to Ministry of Justice statistics. The proportion of effective trials—those that weren't delayed or called off unexpectedly—has risen from a third of the total to 45%. 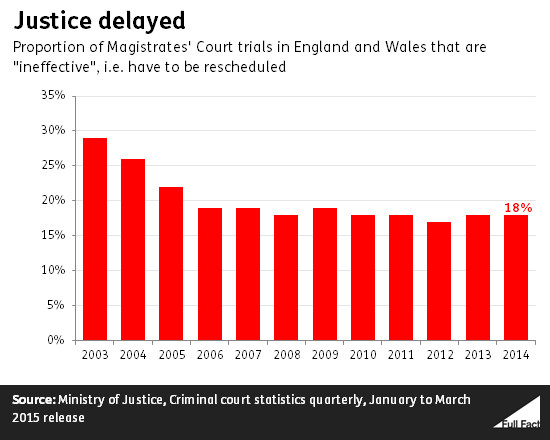 In the Crown Court, where more serious cases are held, the rate of effective trials has also improved slightly.

But look a bit deeper, and it's easier to see the reason for Mr Gove's concerns. Trials can be ineffective for many reasons, not all of which are down to systemic error. If a defendant on bail doesn't turn up to a Crown Court trial, for example, it will be delayed until he or she is tracked down. 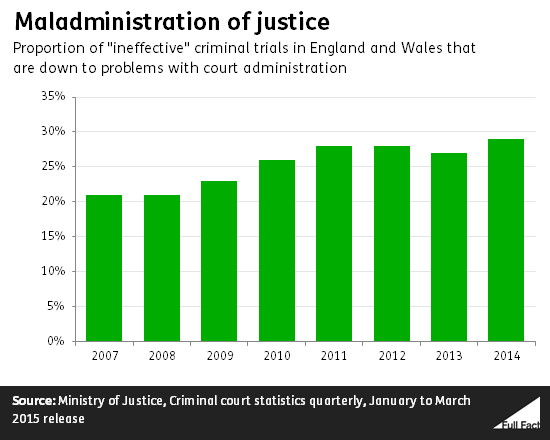 Looking at the proportion of all criminal trials that are ineffective due to administrative problems, the rate has increased from 3.7% in 2007 to almost 5% in 2014.

Mr Gove says that he wants to implement the recommendations made by Sir Brian Leveson, a senior judge, in his review of the efficiency of criminal proceedings. The last government announced a package of £375 million of investment to modernise the "ageing" court infrastructure.