Is crime up under the Conservatives?

Reported crime is rising under the Conservatives.

Crimes recorded by the police have been rising since 2014, but that's partly down to changes in recording practices. Crime in England and Wales is falling over the long term according to the more reliable Crime Survey.

"Reported crime is rising under the Tories… almost every police force in the country recorded an increase in crime over the last year.”

We can’t be sure about what’s happened to crime over the past year but it looks like certain kinds of crime might have risen. That said, crime generally has been falling for the past few decades. 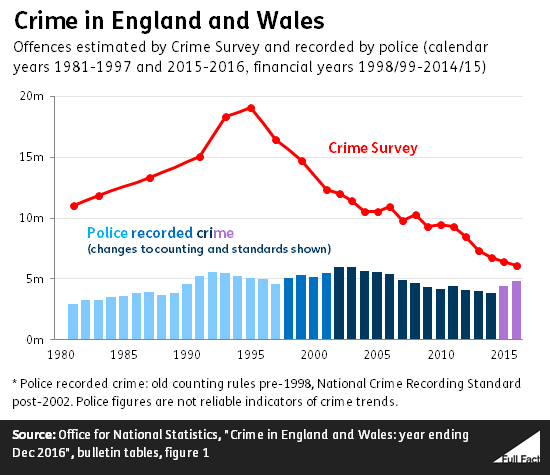 There are two main measures of crime in England and Wales: the Crime Survey and police recorded crime. Labour has specified crimes recorded by the police—shown in the coloured bars on the chart above. Police recorded crime has risen 9% in the past year and has been trending upward since 2014.

But just because the numbers are going up doesn’t mean that crime is doing the same in reality.

There are longstanding problems with these statistics, which have in the past tended to tell us more about police recording practices than about trends in crime. They’re “not currently considered a reliable measure of trends in crime for most crime types”, according to official statisticians.

That said, experts say at least some of the recent rises are likely to be genuine.

The Office for National Statistics says that while the overall 9% bump is probably down to changes in how crimes are recorded, the recorded increases in homicide (hard to miscount), knife crime, and theft offences at least partly reflect a genuine rise in criminal activity.

And Professor Marian Fitzgerald of the University of Kent told the BBC recently that "any rises that we are seeing now are genuine. Improvements [to police recording practices] stabilised a long time ago".

But the headline measure of crime is still the Crime Survey for England and Wales. This involves asking people if they’ve been the victim of a crime, whether or not they reported it to the police. It’s not perfect or comprehensive either, but it picks up many more crimes than are actually reported to the police.

Crime has been falling for more than two decades according to the Crime Survey. In the past year the figures are basically static.

The Crime Survey is best for long-term trends. It’s “less reliable for providing an indication of emerging trends” because of the time lag between when people are surveyed and the publication of the results. So if the police numbers are telling us about a genuine rise in criminality, that may not feed through to the Crime Survey for a little while.

In addition, the headline Crime Survey results (as seen in the red line of the chart above) don’t include cyber crime. The survey only recently began asking people about their experience of crime online, so it’s too early to look at trends in this data, although other sources suggest that cases of fraud and computer misuse may be rising.

So it’s possible that we’ll see a rise in crime according to the Crime Survey in the years to come.

Even if so, the big picture is that crime is much lower than it was in the 1980s and 1990s—as is the case in many developed countries.

We added in the graph above, which was omitted when the article was first published.