The number of frontline prison officers is falling

There are 790 more prison officers since the beginning of 2015.

The number of frontline prison officers has fallen over the last year.

Correct. There has been a fall of a few hundred officers, with the exact number depending on how you define the frontline.

Good news headlines about prisons in England and Wales are hard to come by in recent months. The chief inspector of prisons recently described a “grim situation” in which too many prisons have become “unacceptably violent and dangerous places”. The last Prime Minister spoke of a “scandalous failure” of the system earlier this year, listing concerning statistics on violence and self-harm rates.

Former prisons minister Andrew Selous appeared on this morning’s BBC Today programme to respond to claims that, in spite of all this, prison officer numbers are falling.

This is true. There are fewer prison officers in public prisons in England and Wales than there were in 2010, and there are fewer since a year ago.

The staffing figures we use in this piece are full-time equivalents, unless we say otherwise. That means a person who works half the hours of someone else counts half as much, although overtime isn’t taken into account. The benefit of using this measure is that you get a sense of how many hours are being worked by officers, rather than just caring about headcounts.

Who’s on the frontline?

Just under 24,000 people work in operational roles in public sector prisons in England and Wales. Take away managers and those who work in support roles and you’re left with 14,700 who could be described as ‘frontline’ officers, working at grades 3-4.

These are people who work directly with prisoners day-to-day, and it’s who the Howard League is referring to when it claims that officer numbers are falling. 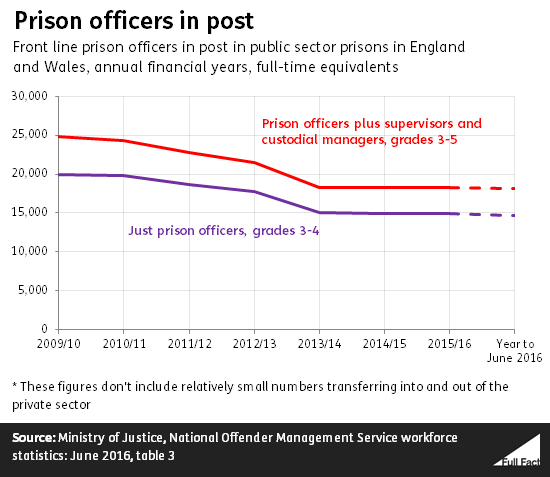 It’s worth noting some caveats, even though they’re unlikely to affect the trends significantly.

There have been some changes to the structure of the prison system that blur the comparison over time a little. Some prisons, such as HMP Northumberland, transferred to the private sector over the last five years. Others have become public prisons as well. These figures can’t account for these changes.

So what is Andrew Selous referring to when he says that the number of officers has gone up?

He’s focusing just on people entering and leaving the service, not accounting for the hours they work. He’s also comparing over a longer time period, and he’s looking at a slightly wider group of people—grades 3-5—which includes supervisors and some managers.

It doesn’t change the fact that the overall numbers of prison officers are falling, but there’s a story to tell here.

There’s been a recent recruitment drive

People enter and leave the prison service for all kinds of reasons. New people are recruited, and people in other roles are moved to the frontline. On the other side, people are promoted or transferred into other roles, retire, resign, leave voluntarily, are dismissed or pass away.

So lots of things are going on when we see the number of officers change.

Here’s what’s been happening to the number of people being recruited to become prison officers at grade 3, compared to those leaving at grades 3-5, over the last six years. These are actual headcounts of people, and don’t take into account the hours they work. 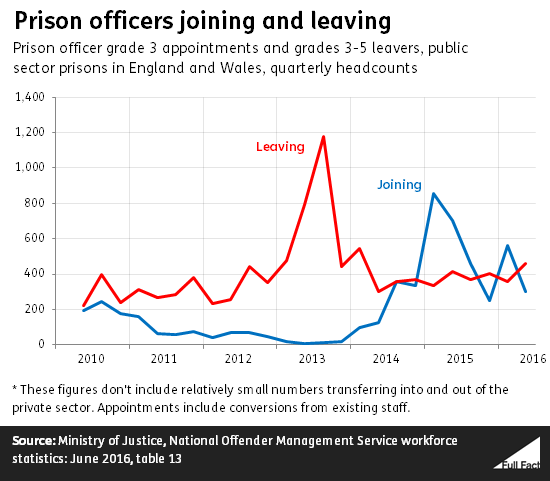 That surge in the number of leavers in 2013/14 was when the prison service wanted to reduce staffing numbers, and so offered voluntary early exit packages for staff. Almost 2,000 officers, grades 3-5, left the service that year.

Since then, there’s been a recruitment drive, and the number of officers being appointed has surged. That’s either slowed or slightly reversed the fall in officer headcounts.

Does this mean that the situation is improving?

We can’t know just from looking at recruitment. This change doesn’t reflect how many hours officers are working. Some people reduce their hours, or are taken on for fewer hours than the people they replaced. In addition, some people are promoted or re-graded out of roles with direct day-to-day contact with prisoners. Recruitment and leaving figures can’t tell us about these things.

To get a sense of how the service is managing against the concerning trends of violence, we need to look at the stock of prison officers overall and the hours they’re working, rather than this narrower set of figures on joiners and leavers.

The headline was changed from 'Frontline prison officers: are they putting in the hours?'.