A record number of people killed themselves in English and Welsh prisons in 2016.

That’s correct, going back to 1978. The rate of self-inflicted deaths per 1,000 prisoners is also close to a record high.

“A record number of people killed themselves in prisons in England and Wales in 2016, figures show.”

Self-inflicted deaths in prisons are at a “record high”, according to the Ministry of Justice.

Last year 354 people died in prison, a 38% increase compared to 2015, according to provisional statistics. 119 of these deaths were self-inflicted (the prison service doesn’t assume whether or not someone intended to take their own life).

That’s the first year there have been more than 100 such deaths in custody since records began in 1978.

But the prison population has also increased over the years, almost doubling between 1990 and 2015. We can look at the rate of self-inflicted deaths as well as the absolute numbers. 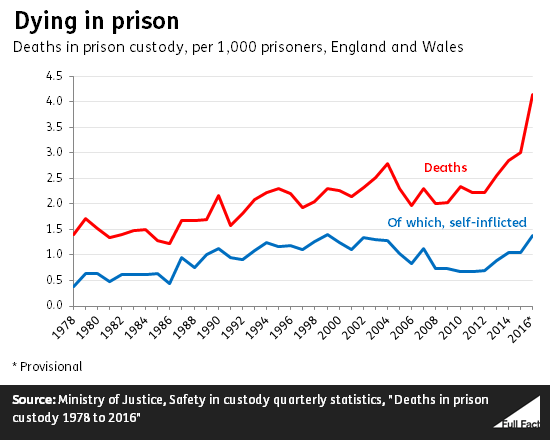 See more in our article on the state of prisons in England and Wales.

The Samaritans’ helpline is available at all hours and can be contacted free on 116 123, or you can email jo@samaritans.org.