The state of prisons in England and Wales

Around 85,000 people are in prisons in England and Wales.

The total population of the UK has also increased over time. There were 182 prisoners per 100,000 adults in England and Wales in 2016. This is higher than historic levels back to 1901, apart from the peak in 2011, according to the House of Commons Library.

However, the uncrowded capacity which represents “the good, decent standard” accommodation the service aims for has been lower than the prison population for almost all of the past 20 years. 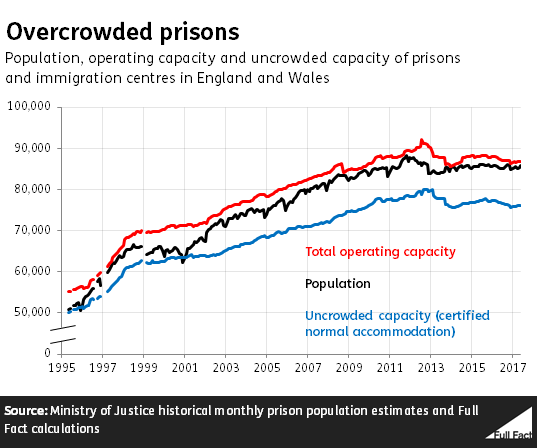 A quarter of prisoners are held in crowded accommodation according to official figures.

There are 15,000 ‘front-line’ prison officers working at band 3 or 4, who are not in management or supporting roles. That number is down from 20,000 in 2010, measuring by ‘full-time equivalents’ rather than headcount in all cases. 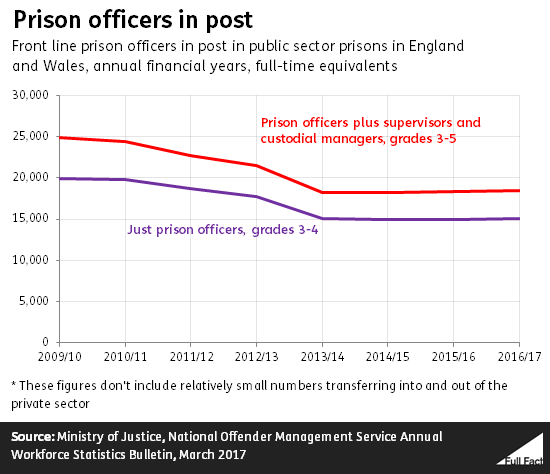 We’ve looked at these figures in more detail in a previous factcheck.

In 2017 there was a net gain of 711 front-line officers through recruitment and promotion, which translated into an increase of 122 full-time equivalents.

The government announced in November 2016 that it plans to recruit 2,500 new frontline officers by 2018.

The number of deaths in custody fell slightly for the first time since 2013 this year, but remain at historically high levels. Other measures of violence have reached record highs.

Last year 316 people died in prison, a 2% decrease compared to 2016. 97 of these deaths were self-inflicted (the prison service doesn’t assume intention). For every 1,000 prisoners 1.1 ended their own life. An unusually high number of deaths have not yet been classified, so the current figures aren’t yet directly comparable to previous years. 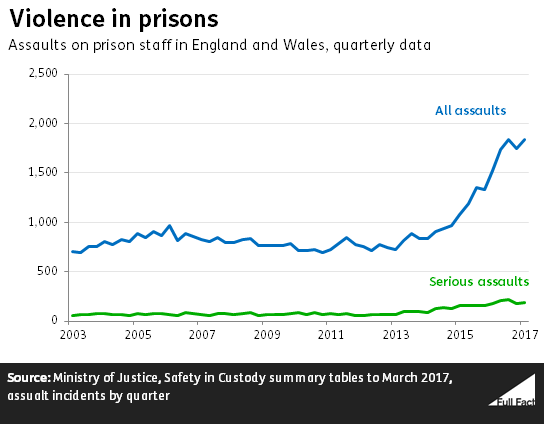 Specialist staff have been called to an increasing number of incidents since 2010.

The number of times the National Tactical Response Group has been called to prisons has been increasing. It was called over 300 times in 2015, compared to over 100 times in 2010.

The NTRG is a specialist team who are called to prisons to deal with potentially serious incidents. These include ‘incidents at height’ (often where prisoners have climbed onto safety netting), hostage-taking, and where two or more prisoners are disobeying instructions. The overwhelming majority of incidents are non-violent, and the team is sometimes called out as a precaution with ordinary prison officers able to deal with the situation themselves, according to the Ministry of Justice.

The Gold Command Suite is opened to deal with similar potentially serious incidents, as well as barricades, industrial action and other disturbances. It directs NTRG and Tornado teams to prisons.  Its use has increased every year since 2011. In 2015, Gold Command was used 86 times compared with 30 times in 2010, and 46 times up to August 2016.

Tornado teams are prison officers with advanced training in “control and restraint techniques”.  They were used to regain control during the HMP Birmingham riot in December 2016, for example. Tornado teams were called 15 times in 2015, compared to 7 times in 2010. 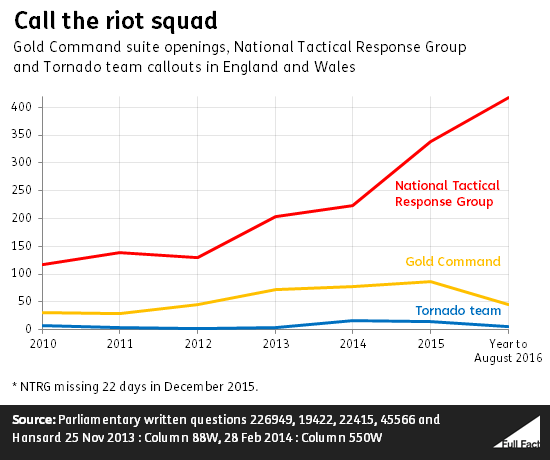 Most prisons have a target for the number of Tornado trained staff. 63% of prisons met or bettered their target in 2015/16. In January the government said it would increase the number of these staff.

The House of Commons Library has published a report about recent concerns over prison safety, examining possible causes of the increasing violence.

HM Inspectorate of Prisons has focused on the subject in its last two annual reports, saying safety outcomes from its assessments were worse than any time between 2007 and 2014.

The government put out a White Paper, Prison Safety and Reform, in November 2016, promising to “address the current level of violence and safety issues in our prisons”.

You can find out more about the state of prisons using our Finder tool. In summary: