The government has taken over control of HMP Birmingham from the private firm G4S after the prison inspectorate raised serious concerns about the “treatment and condition of prisoners”.

The Chief Inspector of Prisons invoked an “urgent notification” process to the justice secretary following an unannounced inspection. This process only happens in the most severe and urgent cases of underperforming prisons. The government must publicly reply to concerns the inspector has within a month, and instigate an action plan. It’s already been invoked in Exeter and Nottingham prisons since the system came into place last year.

In response to the notification, the Ministry of Justice has decided to take over the running of the prison for at least “an initial six-month period”.

We recently looked at the data around violence and drugs in prisons; here is what that data says about the situation in HMP Birmingham.

Why has this happened?

The inspector’s urgent notification letter to the government said Birmingham prison was “slipping into a state of crisis that is remarkable even by the low standards we have seen all too frequently in recent years”.

It cited low standards, staff safety, violence and drug use as some of the prison’s issues.

The inspector’s letter said they “saw many prisoners under the influence of drugs and the smell of cannabis and other burning substances pervaded many parts of the prison”.

The Ministry of Justice aims to randomly drug test 5% or 10% of prisoners in each prison every month.

In the year to March 2018, 20% of the drug tests taken in prisons in England and Wales came back positive (including for psychoactive substances like Spice). In HMP Birmingham, that figures was just over 30%. 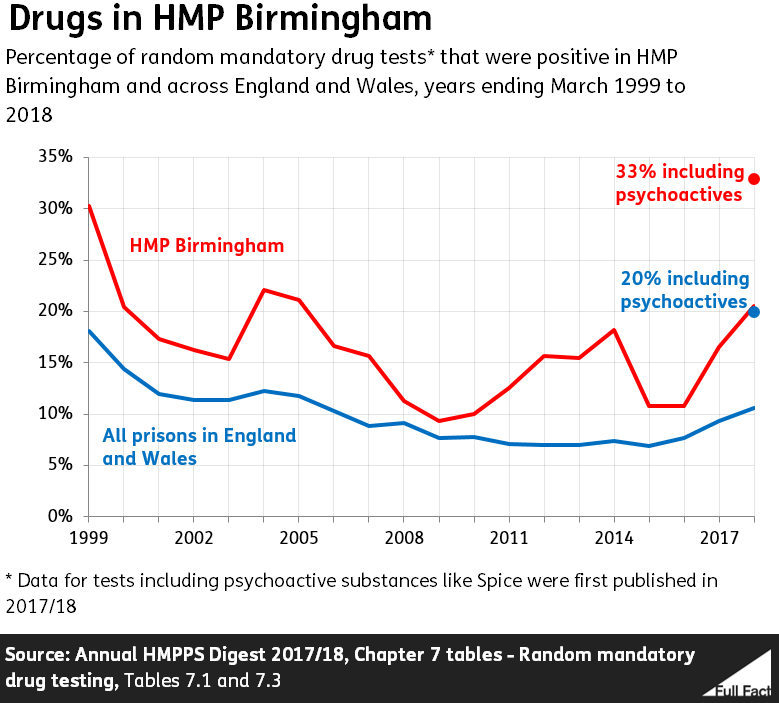 Positive drug tests (not including psychoactive substances) in Birmingham prison are down in general from a high of 30% in 1998/99, when comparable records began. But the picture since then has varied, and the number of positive tests rose from 10% in the year to March 2016 to 20% two years later.

G4S assumed control of HMP Birmingham in 2011. The prisons inspector has said that in 2011 “we recognised that Birmingham had been a failing prison over many years.”

The inspector said the levels of violence over 12 months in HMP Birmingham were “the highest for any local prison in the country.”

Just looking at 2017, HMP Birmingham had the highest number of assault incidents out of all prisons in England and Wales. There were just under 1,150 incidents. Prison population figures fluctuate over a year, but there were an average of 1,250 prisoners in HMP Birmingham in 2017.

You can read more about violence in prisons in our factcheck here.

Drugs and violence are by no means the only issues with Birmingham prison. The inspector reported seeing officers sleeping or locking themselves in their offices, hundreds of broken windows, and described various other extreme incidents.

Although the Ministry of Justice publishes data on many aspects of prisons (from population figures to prisoner earnings), there isn’t national data for comparison on many of the specific issues the inspector raised in this case.