The new rules mean that fewer people will be eligible for the current level of benefits and money will be saved.

It’s difficult to see how this isn’t a firm proposal. It was included in this week’s budget and has already been factored into the government’s borrowing plans. Changes to this policy would have wider implications for future government borrowing.

The Department for Work and Pensions told us it didn’t think the changes have a different status to any other measures in the budget. It confirmed that the formal consultation on them had finished but that ministers would continue to engage with disability organisations as they saw fit.

Government sources have also indicated to the BBC that the changes will be going forward, although some commentators suggest the government may still back down on the plans.

“I remember Cameron saying that on personal independence plans, he said this is our measure and we will enhance and safeguard it. That is what he said before the election and he’s gone back on his word.”—Emily Thornberry

David Cameron reportedly said on BBC Breakfast in March 2015 that: “We’ve replaced one benefit, Disability Living Allowance, with a new benefit, Personal Independence Payment. It’s working well, it is also going to lead to some savings over time. We haven’t created that benefit in order to undermine it. We want to enhance it and safeguard it.”

“Borrowing has gone up by £35 billion since November. The Chancellor was saying one sum and then a few months later it is £35 billion more.”—Emily Thornberry

In the next three years the public sector is set to borrow more than had previously been thought, according to predictions from the Office for Budget Responsibility. It’s still predicted to have a budget surplus by 2019/20.

Adding up the forecast extra borrowing since November and taking away any extra surplus gets you to that £35.6 billion figure. 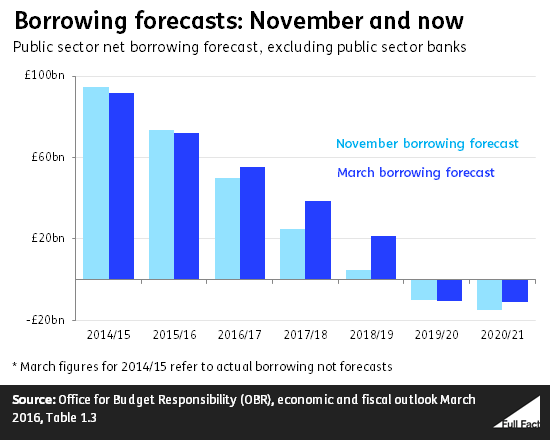 These figures are right.

It’s far from certain that becoming an academy raises standards. The evidence is mixed, and in some cases suggests there’s little difference at all. Some say it’s too early to tell.

The government has pointed to evidence that performance at the first set of sponsor-led primary academies improved faster after being open for two years than local authority school performance did over the same period.

But we can’t conclude much from that: the sponsor-led primary schools in the study performed worse to start with, so they had more room to improve.

It’s right that converter academies get good GCSE results. The proportion of their pupils passing at least five GCSEs with an A* to C grade, including in English and maths, is higher than in other schools, with 64% doing so in converter academies in 2015, compared to 56% in local authority schools.

But schools generally ‘convert’ to academy status when they’ve been performing well, and this could explain why they perform comparatively better.