"In all, the last government legislated for £21bn of welfare savings"—George Osborne and Iain Duncan Smith, 21 June 2015.

£21 billion is a Treasury estimate of the effect of all the decisions taken since the 2010 election. The figure uses the costs and savings of different policies from the 'scorecards' produced at events like the budget.

The Office for Budget Responsibility data referenced by the Treasury notes that it "assumes that the initial policy costings were accurate".

As Osborne said, £21 billion is the saving that the government legislated for. The Institute for Fiscal Studies, using more up-to-date figures, estimate that the policy changes actually saved £17 billion.

£17 billion is the difference between actual spending on benefits and tax credits in 2015/16 and the amount the government would have spent if no policy changes had been made.

In real terms, spending on these items is expected to be roughly the same in 2015/16 as it was in 2009/10. An ageing population and slow growth in earnings have acted against attempts to cut the bill. 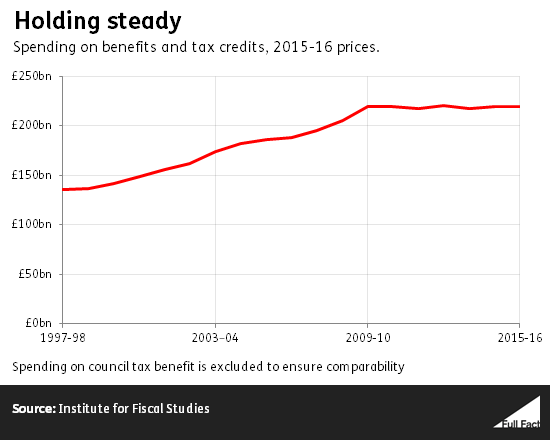 Making larger savings in the last parliament doesn't mean that the government is going to find it easy to find £12 billion in this parliament. Some of the easier savings, like changing the way benefits are adjusted for inflation, have already been made. The decisions this time around will be harder to make.