The show kicked off with a debate on proposed changes to junior doctors' contracts, and what they'd mean for working conditions and patient care.

This is not easy to factcheck. The proposed contract is complicated and how it would translate into junior doctors' actual pay and working conditions is even more so. Different hospitals, different specialties, different managers—there's no simple way to quantify what the impact would be on a 'typical' junior doctor.

We're working on it. In the meantime, see our introductory guide to the dispute, and explanation of figures on weekend deaths.

"Many junior doctors are completely overworked at the weekend, and in fact there are some that work 91 hours a week"—Justine Greening

Both the British Medical Association (BMA) and the government agree that working weeks of over 90 hours are a problem. What's disputed is whether or not the government's proposals would prevent such working patterns in practice, or whether it could actually lead to longer shifts.

Workers, including junior doctors, are "entitled to a rest period of 11 consecutive hours rest in each 24 hour period during which he works for his employer" because of the Working Time Regulations 1998. If they spend the rest of the time working that's 13 hours a day, and over seven days that adds up to 91 hours.

Some junior doctors have said they routinely work shift patterns like this.

The BMA says the government's plans would remove some safeguards against employers in the English NHS breaking the rules when setting shifts, and that the Working Time Regulations alone aren't sufficient to prevent this.

The government has more faith in the Regulations, which it says have reduced hours. And it says it's proposed safeguards beyond the Regulations, including a new system for reviewing working hours.

"In a recent survey, I think 70% of junior doctors are saying that if Jeremy Hunt does what he is threatening to do, which is impose what is currently on the table on junior doctors, 70% of them say they will go abroad"—Chuka Umunna

A couple of weeks ago the Guardian reported on a survey it said shows that more than 70% of "young medics" would move abroad, become a locum doctor, or change career if the government's proposed contract was imposed. Looking just at those who said they'd move abroad the figure comes out at around 40%.

But that number tells us nothing about what proportion of junior doctors feel the same, because this wasn't a representative survey.

The survey was publicised through the "Junior Doctors Contract forum" group on facebook. Not all members of the group are doctors, and it seems likely that members are more concerned about the contract than the average doctor is. That concern may apply doubly to the members who took the time to click through and complete the survey.

"When Labour were in power, they only built 13,000 houses. There were more houses built in the last year when Margaret Thatcher was in power - council houses"—audience member

"I'm sorry, that is not a figure that I recognise. Before the crash, we were building around 240,000 new homes a year"—Chuka Umunna

The two speakers were talking past one another here: the audience member meant to talk about council house building, but Mr Umunna's reply was about total homes built.

The audience member has a point, technically. But focusing on council houses ignores the fact that most social homes are now built by housing associations. To get the full picture on social housing we need to consider both.

But add in the housing association builds, and the "Labour" total during those years is almost 360,000. 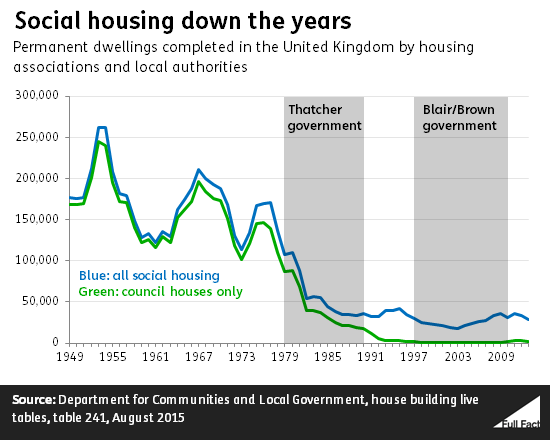 Governments will have gone in and out of office in the middle of a year, and homes completed early in one government's term will have been started under another.

"If you look at crime across the board actually in London, it's fallen dramatically over the last few years, and at the same people who have been victims of crime are saying that they're more satisfied actually with how they're being dealt with"—Justine Greening

Recorded crime in London has been falling for over a decade and saw a sharp drop between September 2012 and September 2014. Since then it's ticked up again slightly.

However these figures can't tell us a reliable story about trends—in particular better police recording practices are thought to have affected recent rises across the country.

Crime has been falling across England and Wales for almost two decades and London is likely to have been similar. These figures come from the Crime Survey which looks at adult victims of crime what their recent experience has been (so wouldn't include crimes against companies, for instance, and doesn't include online crime).

"You say that crime is falling, but the figures for London on knife crime show a big rise, don't they, 18% increase"—David Dimbleby

We haven't been able to find the 18% figure, but it's hard to tell what time periods they are referring to. Recorded knife crime in London rose over the last year, as did knife crime that resulted in an injury.

The Met Police reportedly claimed knife crime was up by 18% back in September during an interview in the Guardian, but we don't know what time period this covers. We haven't been able to back that figure up and have asked the Met about it.

The latest figures show that recorded knife crime is up by about 5.5% if you compare the 12 months from October 2014 to September 2015 with the 12 month period before that. Knife crime with injury is up 11% over the same period.

Those figures were released only yesterday, but the previous figures are similar.

Recorded knife crime overall is still lower in recent years than at the turn of the decade. Again, these aren't reliable indicators of crime trends. 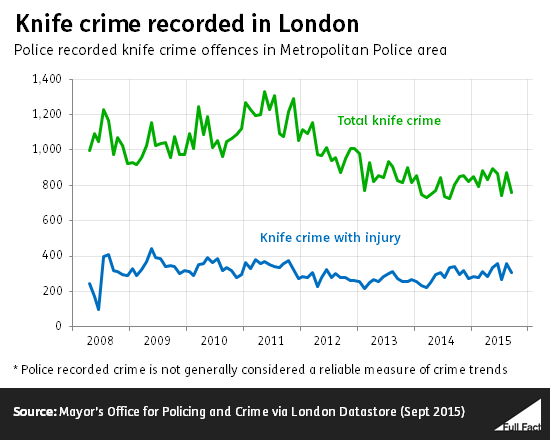