One in seven workers are self-employed, and the number is growing.

One in seven is right, and the number and proportion of workers that are self-employed has been rising since the early 2000s, although it has fluctuated.

"One in seven of the labour force now work for themselves."

Jeremy Corbyn said today, in his speech to the Labour Party Conference, that "one in seven" of those in the labour force are self-employed. This morning the shadow Education Secretary, Lucy Powell, reportedly claimed that the number is "growing".

One in seven is right, according to the Office for National Statistics (ONS). Its latest figures show that just over 31 million people are employed, of which 4.5 million work for themselves. That's around 14.5% of all workers, or one in seven (measuring over May-July 2015).

More to the point is whether the proportion is growing. Was that one in seven previously one in eight?

That depends on where you measure from. In the same period a year ago, to take one point of reference, the proportion of self-employed people was slightly higher than it is now, at 14.9%.

Here's the chart—decide for yourself what it shows. 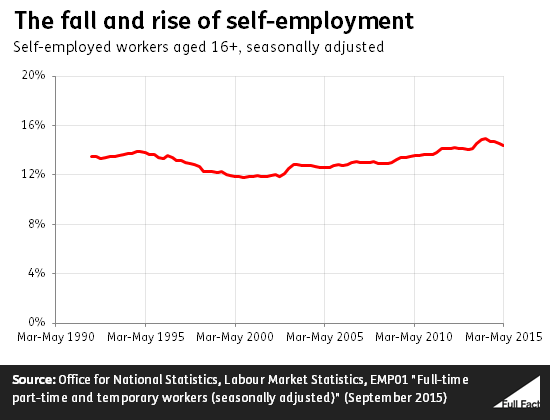 The ONS has also published analysis comparing back to earlier figures, finding in 2014 that the proportion of workers who were self-employed (15% over the year) was higher than at any point over the past 40 years.

We added in the last sentence to reference the 2014 ONS analysis.