Have more council houses been built in the last seven years than under Labour?

There are more council houses that have been built in the last seven years than under the last Labour government.

This claim is technically correct, but it ignores the major role of housing associations in the provision of social housing. Including homes built by local authorities and housing associations, Labour built more houses during their 13 years than in the 7 years since then, but built on average fewer houses per year.

“There are more council houses that have been built in the last seven years than under the entire period of Diane's period in government.”

Technically more council houses have been built since 2010 than during the 13 years of Labour but most new social houses aren’t council houses.

Taken together, we can see that more social housing was actually built during the previous Labour government than since then.

Under Labour, housing associations and local authorities built about 251,000 homes in England. Since then, they’ve built roughly 186,000 homes.

On average, housing associations and local authorities have built around 26,500 houses each year since 2010. The Labour government had a lower average, building about 19,000 homes per year.

These figures are based on the number of homes completed, rather than starting to be built. Houses completed early in the life of one government will have been started under the previous one, and it can take time before a new housing policy is introduced and has an impact on building. That said, counting completions gives us a better sense than housing starts of the number of homes being made available to live in. 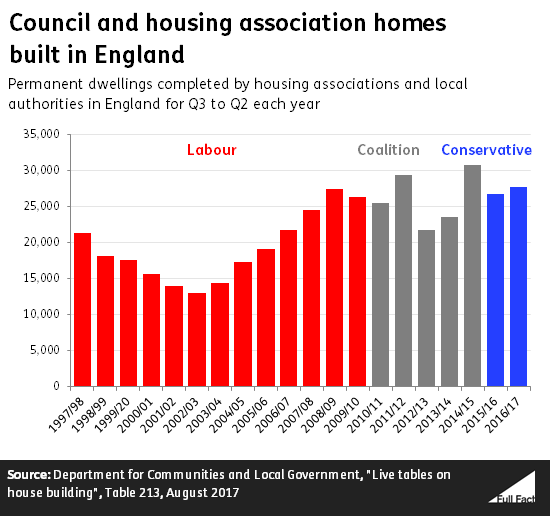