Does the government spend £50 billion on debt interest payments?

We spend nearly £50 billion on debt interest in the UK.

The government’s debt interest bill was £48 billion in 2016/17, although it effectively paid some of that back to itself through the Bank of England. The government actually spent about £39 billion.

The UK government’s debt interest bill was about £48 billion in 2016/17, but that’s not the most meaningful figure to be using.

The government effectively pays some of that to itself. As we’ve covered before, almost a quarter of government debt is owned by the Bank of England, which pays the profit back to the Treasury.

The total amount of spending on what are called ‘public debt transactions’ amounted to £39 billion in 2016/17, once you take off what the Bank of England owns. 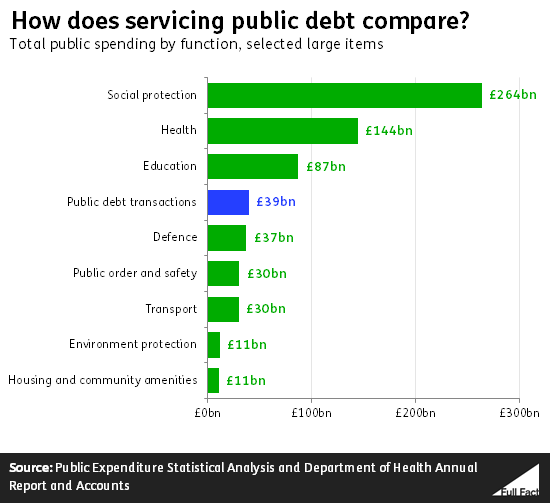 It is also lower than the NHS pay bill. The Department of Health’s annual report shows that £48 billion was spent on permanent staff costs in 2016/17, increasing to £54 billion when including other staff.