Factcheck: Are only one in 40 jobs added since the recession full-time?

"The TUC is also publishing research showing that since 2008, only one in 40 new jobs has been full-time. Over the same period, 60% of net jobs added have been self-employed and 36% have been part-time."—The Guardian

Just last week in the Autumn Statement the Chancellor said that 85% of new jobs are full-time. Now we're being told by the Trades Union Congress that it's only 2.5% of jobs (one in 40). How can both of these figures be correct? The answer is they can't—not if taken over the same period and using the same definitions anyway.

Who has a full-time job?

The Chancellor and the TUC have drawn their figures from different periods and used slightly different definitions. The TUC didn't actually say that only one in 40 new jobs is full-time, but that full-time employees only accounted for one person in 40 of the overall increase in employment between January-March 2008 and June-August 2014.

Self-employed people working full-time weren't included in this figure, and neither were unpaid family workers or people who were employed full-time on government supported training programmes.

When these people are added to the full-time figures, of the net increase in employment in this period about 13 in every 40 people were in full-time work. If we only look at full-time self-employed people and employees, then it was just over 12 out of 40.

When the Chancellor said that 85% of new jobs were full-time, he included self-employed people in his figures. But he also used a different time period: the Chancellor measured the change over the last year (we've gone into the details here), while the TUC have measured from 2008 to present.

Pick a year, any year

The TUC have measured the change in employment from January-March 2008 to June-August 2014, giving an increase in employment "since the recession" of about 1.1 million.

Contrastingly, the Treasury's Autumn Statement document said that the number of people in employment has risen by 1.7 million since the government came into power. The Chancellor said that "on average, for every day the government has been in office, 1,000 new jobs have been created."

The number of people employed only on government training schemes fell in this period, so the proportion of the increases in employment accounted for by the other categories (including full-time employees) would add up to slightly more than 100%. But because the decrease in the people on government schemes was small (5,000 people) it's not too misleading to say that roughly half of the increase came from full-time employees. 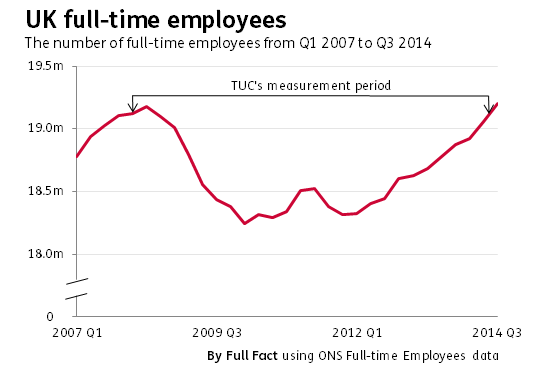 The number of people employed full-time fell from autumn 2008, rallied briefly during the second half of 2010 but did not begin a sustained recovery until 2012. In the TUC's figures, the increase in full-time employment since 2010 is eaten up by the large fall during the recession.

Finally, it's worth noting that the TUC use data from the Labour Force Survey— referring to employment rather than jobs. As we've pointed out before, these are not the same thing: some people have more than one job, and some jobs are shared.

We contacted the TUC for a comment on their choice of measurement period. We'll update the article when they reply.

The TUC's comment can be found here. We forgot to put this link in at the time—better late than never.