Is the government getting the deficit down?

The deficit has come down under the Conservatives.

This is correct, the deficit has fallen from 10% of GDP to 2.3% between 2010 and 2017, but the government is far off its original plans for a reaching a surplus.

“We’ve got the deficit down” 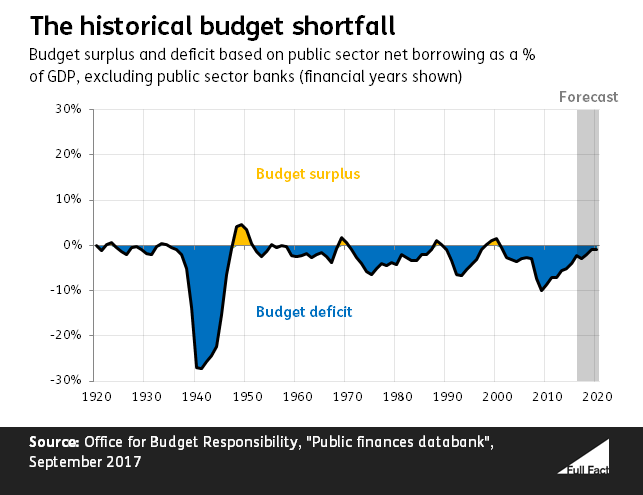 What is the deficit?

We’re using the public sector net borrowing measure of the deficit. This is the difference between the government’s income (from things like taxes and investments) and everything it spends on public services, investment, and debt interest. It’s different to the national debt, which is the total amount the government owes to other institutions.

The deficit can be calculated in cash terms, or as a percentage of GDP, which tells us the size of the deficit in relation to the value of the economy as a whole in that year.

It’s down, but it’s taking a lot longer than the Conservatives initially planned

So why does Karen Bradley make a point of this?

Cutting the deficit—and achieving a surplus—has been a pledge for this Conservative government and the previous Coalition government. And although it has been cut it since 2010, the Conservatives have not met all of their targets.

In 2015 the government updated its plans, aiming to have a surplus on public sector net borrowing by 2019/20.

The government isn’t forecasted to achieve this within the next five years, and new targets were set by the Chancellor last autumn, which are “presumed” to be for 2024-25.

So the deficit has been coming down, but not as rapidly as the Coalition and the Conservatives had said in 2010 and 2015.