Who said what about Hezbollah

“[Jeremy Corbyn] said: ‘It will be my pleasure and my honour to host an event in Parliament where our friends from Hezbollah will be speaking… I’ve also invited friends from Hamas to come and speak as well.’”—David Cameron

Here is the full speech, said to be recorded at a Stop the War Coalition event in 2009.

Mr Corbyn did say shortly after that line: “As far as I am concerned, that is absolutely the right function of using parliamentary facilities to invite people from other parts of the world so that we can promote that peace, that understanding and that dialogue.”

He went on: “the idea that an organisation that is dedicated toward the good of the Palestinian people and bringing about long-term peace and social justice and political justice in the whole region should be labelled as a terrorist organisation by the British government is really a big, big historical mistake and I would invite the government to reconsider its position on this matter and start talking directly to Hamas and Hezbollah. That is the only way forward to bring about peace.”

There’s a legal duty in all parts of the UK for the state to help people who are homeless or threatened with homelessness. Councils are responsible for this in England, Wales and Scotland, while Northern Ireland has a single organisation responsible for housing.

In 2014, the Welsh government passed a law placing what it described as a “stronger duty” on councils than under the 1996 Housing Act, which previously applied to Wales as well as England.

It means that Welsh councils now have to provide everyone, whether homeless or not, with housing advice and assistance. And there are now fewer exceptions in Wales on when the council has to find accommodation for a homeless person or family.

In England, by contrast, homeless people don’t generally get housed by the council for any period unless they pass the “priority need” and intention tests.

Research by the House of Commons Library has more details.

We can’t say that homelessness has been reduced by 67% or any specific other amount because the Welsh government has changed what they do about homelessness and how they count it.

This isn’t to say that the changes haven’t made a difference; just that we can’t put a number on that difference at the moment.

Homelessness charity Crisis used this figure in March, referring to the number of households accepted as homeless and entitled to housing between October and December last year because they were unintentionally homeless and in priority need. They compared those 405 households to the number meeting those same criteria under the old system 12 months previously (1,210), giving the apparent 67% drop.

But official statisticians say that “the data cannot be compared. This is because, under the new legislation, homelessness may have been resolved through earlier intervention in some cases and the returned number [is] therefore lower than would have been recorded under the previous legislation.”

Statistics Wales is going to say more on this shortly. Crisis told us that the numbers are evidence of a “dramatic fall in the number of households who get all the way through to being accepted as homeless”.

It’s correct that in England the number of households accepted as homeless and entitled to housing is up by a third since 2010. 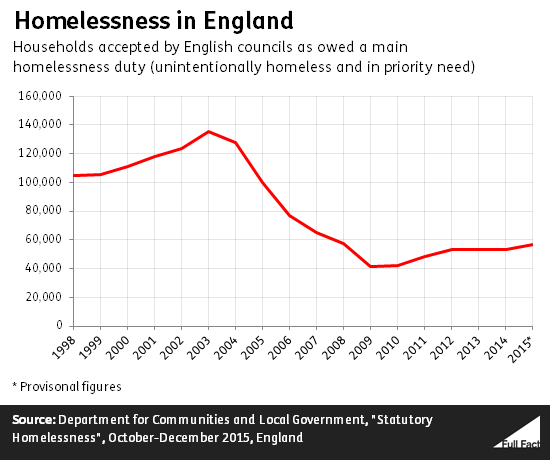 These figures don’t include those who were assessed as homeless but not in priority need, or homeless but intentionally so. There are around 30,000 such cases each year.

This comes up a lot at Prime Minister’s Questions. It’s technically correct but not helpful, because councils don’t build many houses nowadays.

This is based on Labour’s own analysis of local government spending figures in England between 2012 and 2020. The research behind it doesn’t appear to be published, and Labour hasn’t yet got back to us explaining where the numbers are from.

In the past, more deprived areas have tended to see larger cuts to their funding from central government than less deprived ones, although they still have larger overall spending power.

The Institute for Fiscal Studies says this is because more deprived areas are more dependent on revenue from central government, compared to things like council tax which they raise themselves.

So when grants are reduced, the areas that already got more of them lose out more.

Over the course of this parliament, the government plans to remove its central government payment—the revenue support grant—and have councils raise more of their income from local business rates. Meanwhile their overall spending power will be smaller at the end of the parliament. We haven’t analysed what this might mean for more and less deprived areas.

“Inequality of course is getting worse”—Jeremy Corbyn

“Inequality has gone down under this government.”—David Cameron

There's no single definitive measure of inequality in the UK, which explains why we often hear these competing claims. There are figures which show a fall on the Prime Minister's watch but these aren't very significant trends.

“No country has done more than Britain to help when it comes to Syrian refugees... no country has raised more money, and only the United States has spent more money”—David Cameron

We’ve previously seen the claim that only the USA has spent more money on aid for the Syrian crisis than the UK. It’s correct.

In 2013 there were 1,232 diagnoses of Down’s syndrome before birth, and at least 925 of those pregnancies ended in termination. That’s 90% of the cases where we know the outcome.

These figures are considered more complete when it comes to Down’s syndrome than the abortion statistics. They cover England and Wales.

Professor Joan Morris, who was responsible for them, told Full Fact that 90% of women who get the diagnosis choose to have a termination, and that this has remained very consistent over the twenty years of the register.

So what difference can a test make?

The first stage involves a blood test, which gives a rough idea of how likely it is that the foetus has Down’s syndrome. The second is amniocentesis, which gives a definite diagnosis.

The difficulty with amniocentesis is that it carries risks of miscarriage and other complications.

It may mean that more women can avoid amniocentesis and thus the risk of miscarriage.

But if it also means that more cases of Down’s syndrome are diagnosed before birth, Mr Evans may be right to say that it will also mean that a greater number of pregnancies are terminated in response to that diagnosis.

Relative poverty has fallen slightly, continuing a longer-term trend. Absolute poverty, though, has risen slightly since a few years ago. We’ve covered more about how these two measures differ here. 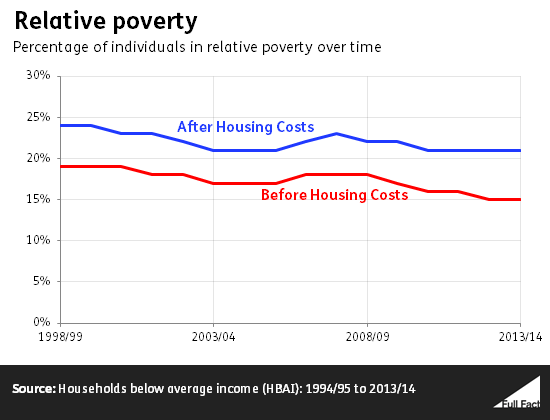 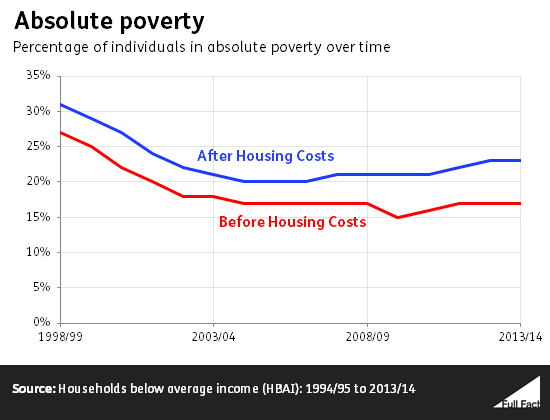