Is housing getting less affordable?

It’s almost taken for granted these days that housing isn’t as affordable as it used to be.

But what does ‘affordable’ mean? The word is used to mean different things in different contexts, and there’s no single measure of the ‘right amount’ to spend on housing.

In practice, there are different ways of tracking how housing costs compare to how much money people have, each with their own strengths and weaknesses. We’ve explained some of the main ways below.

A simple way of tracking affordability is to compare how the median house price and median wage have changed. The median is the house price or wage which is exactly in the middle, half of all are higher and half are lower. 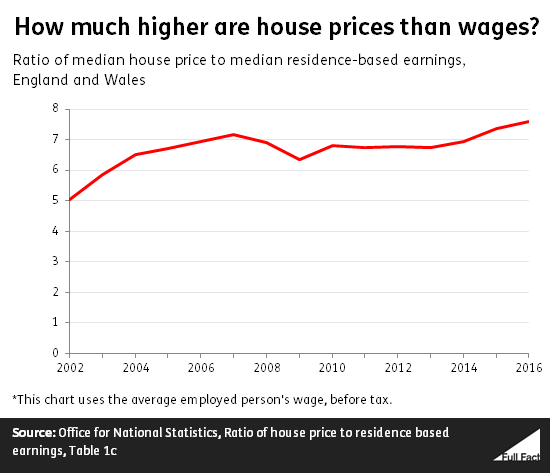 These figures from the Office for National Statistics (ONS) only cover England and Wales, so we can’t use them to build up a picture of the whole of the UK.

The ONS have published an article on this data that uses the workplace measure. It shows a very similar trend over a slightly longer period.

What about costs for private renters? You can take a similar approach by comparing private rents to wages.

It turns out that where you live makes a big difference. The ONS have calculated that in the ‘least affordable’ council in England, Westminster, the median rent was 73% of the median wage in 2015. By contrast, the figure was 19% in Copeland, Cumbria. 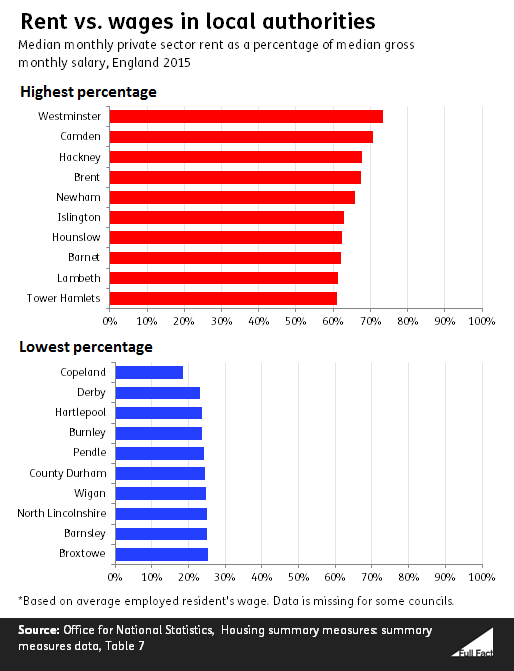 So far, we’ve talked about measures that use the median wage. That’s the amount of pay the ‘middle’ employee gets before things like tax, benefits and pensions are taken into account.

It works as a way of making affordability comparisons over time, or between different places. It’s based on detailed information—the Land Registry’s house price data and the Annual Survey of Hours and Earnings—which means you can make estimates for small areas. Data also becomes available relatively quickly.

But it’s not a good way of finding out how much money people actually have to spend on housing. You need to look at what everyone in a household earns to measure that, because they could all contribute to housing costs. You should also take other income sources and taxes into account.

One way of using household income to measure affordability is to say that if a household is spending more than a certain percentage of its income on housing costs, then the housing is ‘unaffordable’. Experts have done this in a number of different ways.

Eurostat (the statistical body for the EU) says that households spending more than 40% of their income are in ‘housing cost overburden’. It estimated that 12.5% of the UK population lived in this kind of household in 2015. Across the whole of the EU it was 11.3% in the same year.

The Resolution Foundation think tank did an analysis which set the level of ‘unaffordable’ housing at anything costing over one-third of household income. They found that the amount of households spending more than this went up from 7% of all households in the UK in 1994/95 to 16% in 2013/14.

This kind of approach reveals more about how many people are overladen with housing costs, but it’s not good at distinguishing between rich and poor households. Having two-thirds of your income left after housing costs means something very different to a millionaire than it does for someone on minimum wage.

One way of addressing this problem is to ask whether paying for housing leaves a household with enough left over to meet their other basic needs. This is known as a ‘residual income’ approach.

Almost one in five households in the private rented sector had unaffordable housing, according to a 2016 analysis by social researchers NatCen based on this measure.

So what is ‘affordable housing’?

The term ‘affordable housing’ gets used a lot in policy discussions.

Officially, the term covers social rents—usually set at about half the market rate—and ‘affordable’ rents, which are higher, but no more than 80% of the market rate. It also covers affordable home ownership schemes, which aim to help people spend less to get on the housing ladder.

Deciding who ‘can’t afford housing’ is no easy task, as we’ve seen. Some of these schemes look at income and current housing circumstances as part of deciding who’s eligible. Other affordable home ownership schemes aren’t limited to those with low incomes.

The amount of new housing provided at social rent has decreased in recent years, while the amount provided at affordable rents has increased.