Is income tax being cut for 32 million people?

The Conservatives are cutting income tax for 32 million people.

This is the number of people who will be paying less income tax in real terms in 2019/20 than in 2015/16. We haven’t been able to exactly replicate the figure as some of the underlying data isn’t publicly accessible – but it seems in the right ballpark.

A headline claim from the government’s 2018 budget was that it was “cutting income tax for 32 million.” This was repeated on the Conservative’s Twitter account.

The Treasury told us that, rather than being due to a completely new policy introduced in the Budget, this is the number of people (both those in employment and pensioners who earn more than the threshold) who will see their income tax bill reduced in real terms between 2015/16 and 2019/20. So it’s more an effect of the government’s policies over a few years.

We asked the Treasury where the data comes from and they said it wasn’t all in the public domain, because of confidentiality issues surrounding the data on taxpayers, and neither were their calculations.

It’s inappropriate for Ministers to use figures that aren’t in the public domain, so that anyone can check where they’re from and how they’re calculated. If it’s not possible to publish the figures then Ministers shouldn’t use them.

As a result we can’t confirm the exact figure, but it does seem to be in the right ballpark.

Who benefits from income tax changes?

In 2015/16 the personal allowance (the income you don’t pay tax on) was £10,600. If that figure had risen in line with inflation, the change in how much things cost over time, it would stand at around £11,520   in 2019/20. The government has actually increased it to £12,500 for the next financial year. So everyone who gets a personal allowance would benefit from income tax changes.

Some very high earners don’t get a personal allowance, but they will still benefit from other income tax changes. That’s because the higher rate threshold (the level above which you pay 40% income tax rather than 20% income tax) is also being increased by the government to £50,000 in April 2019. Back in 2015/16 the higher rate threshold was £42,385—if it had risen in line with inflation it would stand at around £46,220.

What all this means is that almost everyone earning above £11,520 in 2019/20 will be paying less income tax  in real terms than they would have, had the UK government kept income tax changes in line with inflation.

So how many people would we expect to be in this category?

Because some of the information isn’t publicly available, we can’t forecast this perfectly. As a starting point, we can assume that’s almost   everyone who pays income tax at the moment (people earning over £11,850) will benefit—that’s about 31 million people.

People earning between £11,520 and £11,850  would also benefit. That’s the group who would have ended up paying income tax if the government hadn’t increased the personal allowance above the level of inflation. We don’t have figures on how many people this equates to, but it’s not unreasonable to assume it’s enough to push that 31 million figure up to 32 million.

The claim doesn’t tell you how much people are saving

Saying how many people benefit from income tax changes doesn’t give you any sense of how significant these changes have been. In theory, if the government increased the personal allowance by £1 tomorrow it would be reducing income tax for around 30 million people, though would only deliver a benefit of 20 pence each.

Between 2015/16 and 2019/20 the personal allowance is forecast to have increased by around £980 in real terms. That means that basic rate taxpayers (that’s most people) won’t have to pay 20% income tax on £980 of their income, that would equate to a reduction in the amount of tax paid to around £200.

What about other taxes?

Income tax is only one of the taxes people pay—other tax and benefit changes have affected some peoples’ earnings to a greater extent in recent years.

The Institute for Fiscal Studies looked at the impact of tax and benefit reforms between May 2015 and May 2017 and found that benefit reductions somewhat offset tax reduction for the average household.

In total tax and benefit reforms between May 2015 and June 2017 benefited households by £111 on average per year. But this wasn’t the experience of all household types: the benefit was primarily felt by richer households, while poorer households lost out on balance. 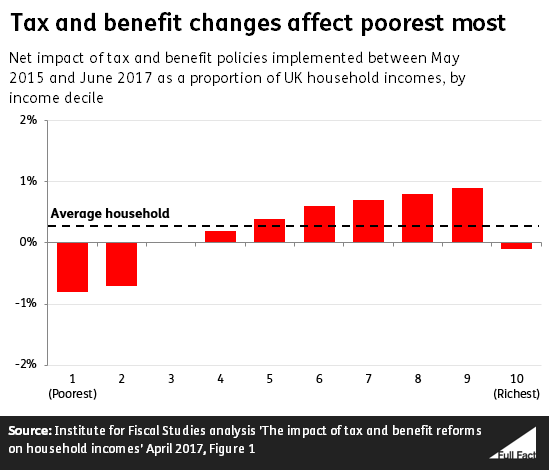 We’ve written more about tax and benefit changes since 2010 here.