More people are in work since the Brexit vote

400,000 more people are employed in the UK since the EU referendum.

“We’ve got 400,000 more people employed in this country [since the EU referendum]. We’ve got record low levels of unemployment.”

This is correct on employment, in fact the 400,000 figure quoted is lower than the figures show. Unemployment is at historically low levels, but is not the lowest on record. Both measures have been following a fairly consistent trend since 2012. 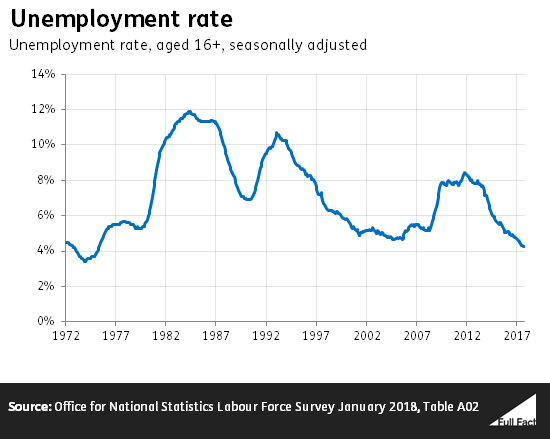 There are an estimated 450,000 more people in employment now compared to the three months from May to July 2016—around the time of the EU referendum. The figure is slightly higher or lower depending on when you start counting from. It was about 31.8 million then, and as of November last year it was 32.2 million.

This is very low unemployment by recent standards, but the rate was lower in the mid-20th century.

The unemployment rate counts people who aren’t in work but are actively seeking it. What’s more difficult to count is how many people aren’t in the kind of work they want to be. While employment levels are high, the experience of being employed is changing.