Not taking into account housing costs pushes the overall number of people living in relative poverty down to 10.1 million in 2014/15.

Both the figures Mr Cameron is referring to are measured before housing costs are taken into account. 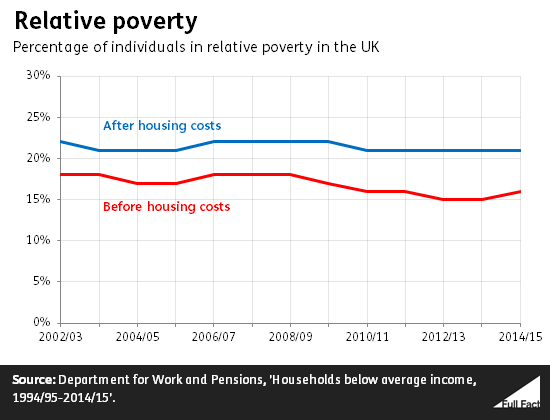 “...two thirds of children in poverty are living in households where at least one adult is in work.”—Jeremy Corbyn

That’s correct. Around 67% of children living in relative poverty in 2014/15 were living in households where at least one adult was in work. That’s the case both before and after housing costs. The numbers are also very similar for absolute poverty.

“4.5 million people in England and Wales alone are in insecure work…”—Jeremy Corbyn

Recent analysis by the Citizens’ Advice Bureau found that towards the middle of last year 4.5 million people in England and Wales were in what it deems insecure work.

This is based on its analysis of official estimates of the number of people over the age of 16 on a zero hours contract, on a temporary contract, working for an agency, working more than eight hours paid overtime per week or working particular shift patterns (it defines these as split shifts or day/night shifts where the hours vary).

“Income inequality has gone down [since 2010], average incomes have grown at their fastest rate since 2001.”—David Cameron

The Prime Minister’s office said that Mr Cameron was referring to data in a recent report by the Department for Work and Pensions on income inequality before housing costs are taken into account.

By this measure, income inequality did decrease between 2009/10 and 2010/11, but has stayed at a constant level ever since then. A similar picture is true of income inequality after housing costs are taken into account, according to this set of data.

There are a number of ways that income and inequality can be measured, and they can sometimes show different trends.

Commenting on a few different measures, the Office for National Statistics has said:

“The most recent peak in income inequality was in 2006/07 or 2007/08, depending on the measure used. Since then the broad trend has been one of gradual decline in levels of inequality on each of the measures.”

The Prime Minister’s office hasn’t confirmed what data Mr Cameron was referring to when he spoke about average wages. However, the same Department of Work and Pensions report also goes into this.

Its data shows that the median income in the UK, before and after housing costs are taken into account, did increase more from 2013/14 to 2014/15 than at any time since 2001/02, after taking inflation into account.