Social housing stock has fallen over the last 30 years

Social housing has been decreasing over the last 30 years and has now been placed into the private rental market.

The British social housing sector dramatically decreased between the early 1980s and the early 2010s. This was largely down to the introduction of Right to Buy and a drop in social house building.

“I think it’s important to note that we’ve stripped away over the past 30 years so much social housing, which has now been placed into the private rental market.”

The size of the social housing sector has been decreasing over time.

The proportion of the population living in social housing in Great Britain halved between the early 1980s and early 2010s, according to the Institute for Fiscal Studies. The IFS puts this down to two key developments: the introduction of Right to Buy in 1980, which gave tenants the ability to buy their council houses at below market rates, and a general drop in the amount of social housing being built.

The number of homes for rent from councils or housing associations in the UK has been decreasing from a peak of around seven million in the early 1980s to just under five million in 2014.

In contrast the number of homes available for private rental has increased from around two million to over five million. 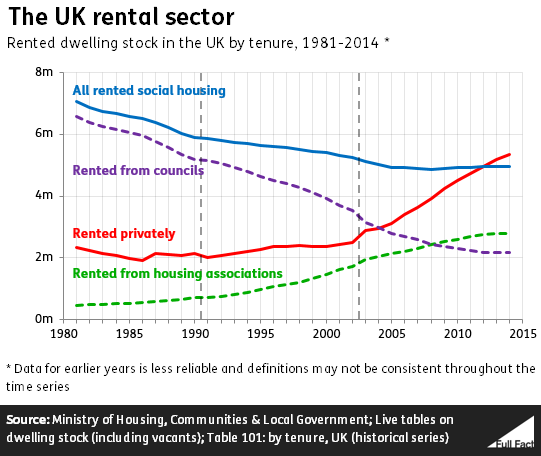 Affordable rent properties were first introduced in 2011 and since then their number has increased significantly while the number of social rent properties has decreased. 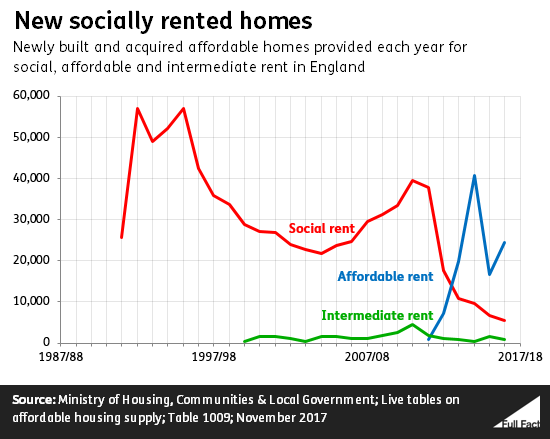 We’ve written more about how affordable housing is, and house building in England more generally elsewhere.