In recent years more money has been spent in Scotland than has been collected, whether or not you count money collected from the North Sea oil and gas industries.

This has also been the case over the last 18 years if you look at the revenue collected and money spent per person in Scotland.

That said if you look at overall spending that hasn’t always been true. At times Scotland has collected more in total revenue, including that from the North Sea, than has been spent.

Scotland’s total public sector revenue was just under £54 billion in 2015/16. That’s around 8% of the total revenue in the UK.

In the same year the total public expenditure in Scotland was £69 billion. That’s around 9% of all public spending in the UK that year, so a greater proportion than the population.

This includes money spent by the Scottish government, councils and by the UK government in Scotland.

Some of the UK government’s spending is notional or ‘non-identifiable spending’. That means the money isn’t necessarily spent in Scotland, but does reflect its share of spending on the UK as a whole. This includes things like defence spending. 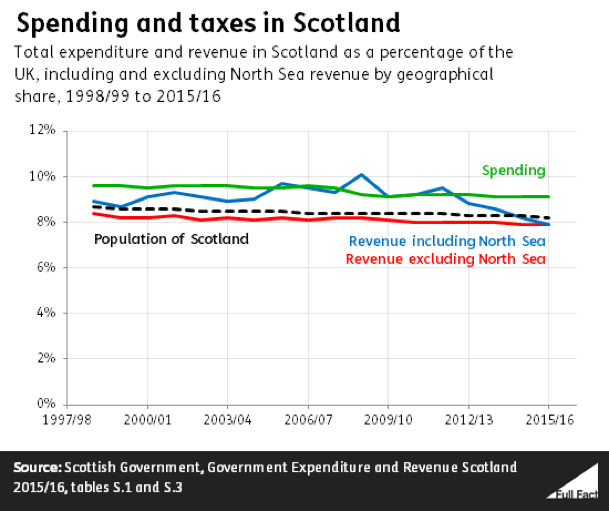 At the moment around 17% of all the revenue collected in Scotland is devolved. Following new powers introduced last year this is set to increase to around 30% of revenue in the coming years, including that from the North Sea.

If we look at the difference in total revenue collected and public spending in Scotland, there was a deficit of around £15 billion in 2015/16, whether or not the North Sea is included.

Using last year’s Scottish government figures, the Institute for Fiscal Studies (IFS) projects that the deficit would be around 6% of GDP by 2020/21, including the North Sea. It says that:

“Scotland is largely insulated from the consequences of the substantial gap between the government revenues it generates and the government expenditure undertaken in or on behalf of Scotland. This is because the Scottish government gets most of its funding in the form of a block grant from the UK government, and the UK government uses revenues from across the UK to pay for non-devolved items like social security benefits and defence.”

If Scotland were to become independent, the IFS says the future finances would depend on a number of different things; in particular the share of the UK debt Scotland would negotiate taking on, how the Scottish economy would perform after independence, and what policies the Scottish government introduced. 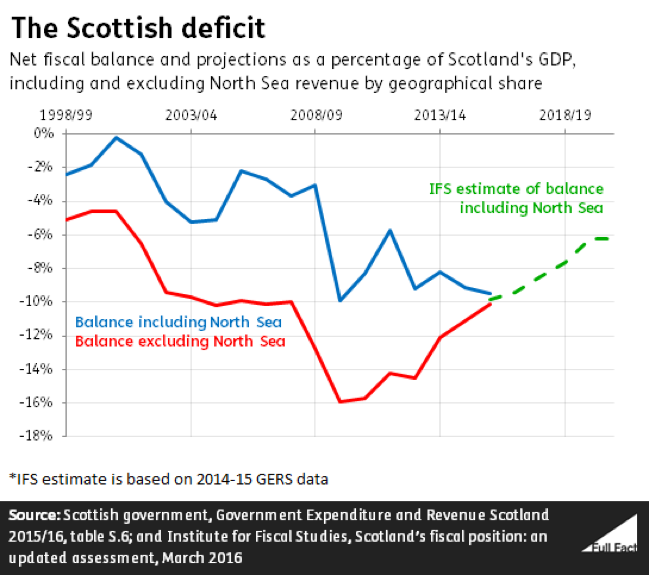 Over the last 18 years the size of this gap has fluctuated, but spending per person has always been higher than revenue. 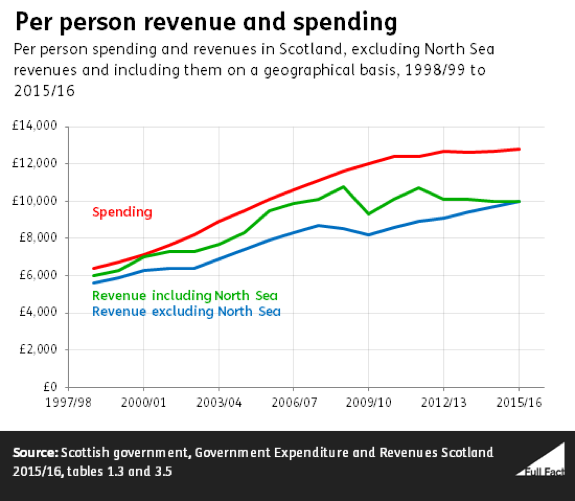 This is based on the Government Expenditure and Revenue Scotland (GERS) figures published by the Scottish government, which are reviewed for accuracy by the UK Statistics Authority.

But the UK government works out spending slightly differently. When it compares the spending per person in the various regions and countries of the UK it only looks at ‘identifiable spending’- money it can say with certainty was spent in that region or country, it doesn’t look at the ‘non-identifiable spending’. 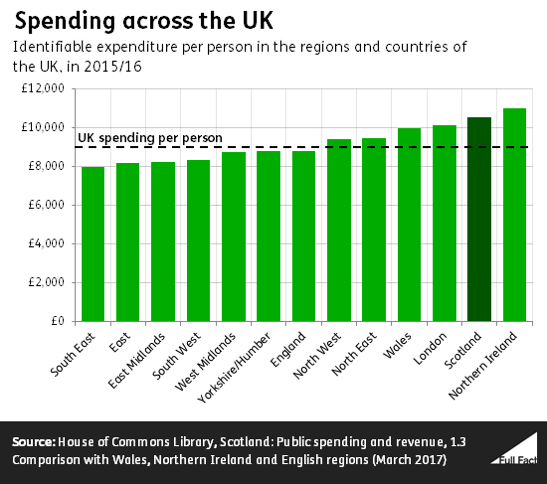 Why the difference in Scotland?

The Scottish government has previously put forward the reasons why it thinks spending per head is higher than in the rest of the UK.

Population density in Scotland is lower than many other areas of the UK. For example there was an average of nine people living in each square kilometre of the Highlands and Eilean Siar in 2013 (the least densely populated areas of the UK).

In comparison the least densely council area in England, Eden in Cumbria, had 25 people per square kilometre. This Scottish government says that this means it costs more to provide the same level of services such as education and health.

The Scottish government also says that “higher public expenditure also reflects Scotland’s greater need for some public services such as in health and housing relative to the rest of the UK.”