"Despite all the rhetoric, on his watch, the tax gap has actually gone up."—Angela Eagle

The tax gap is HMRC's estimate of how much less tax they have actually collected than they should have.

Compared to how much tax has been owed, generally the amount that has been left unpaid as a proportion of that tax owed has been falling.

So roughly the same amount of cash has gone unpaid every year under the Conservatives, but it’s fallen as a proportion of all tax due. 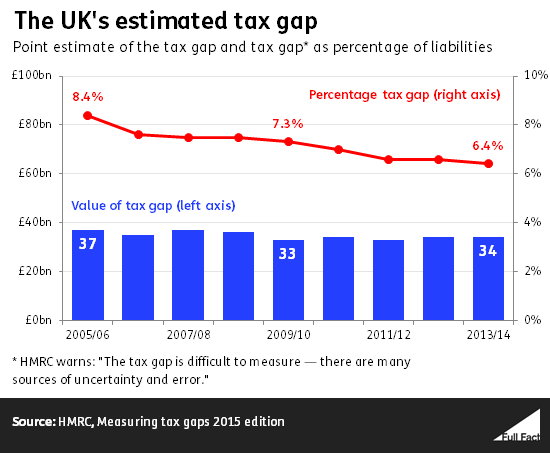 Measuring the amount of tax which goes uncollected is notoriously difficult, and given the uncertainty behind the figures, the increase in the estimate from £33 billion in 2009/10 to £34 billion now might not be a genuine rise.

HMRC's admittedly uncertain figures aren't the only ones available. Tax Research UK, in a report for the Public and Commercial Services Union, estimated the tax gap to be £120 billion in 2013/14—more than three times HMRC's estimate. That figure has itself been criticised, including by tax lawyer Jolyon Maugham and by HMRC who describe it as “way, way out of range”.

"The former Work and Pensions Secretary said this week that the Chancellor's Brexit report should not be believed by anyone and he branded the Chancellor Pinocchio, with his nose getting longer and longer with every fib."—Angela Eagle

Iain Duncan Smith did liken something to Pinocchio this week during an interview with Sky News. We don’t know if he was referring to the Chancellor directly or to claims made in a Treasury report on the short-term impact of a vote to leave the EU, as the question doesn’t seem to have been broadcast.

He said: “Well, when I heard that I did think of Pinocchio and the nose growing rather long here.”

Iain Duncan Smith also reportedly said that the Treasury’s report “should not be believed by anyone”.

"In their own report published this week called Labour's Future, they say they are becoming increasingly irrelevant to the working people of Britain.”—George Osborne

An inquiry conducted into the Labour party’s losses at the 2015 general election did conclude that the party was “in danger of becoming a party of sectional interests, irrelevant to the majority of working people in the country.”

The report stressed that Labour needed to broaden its politics and culture in order to connect with the whole country rather than just segments of it.

"The problem in the Highlands of Scotland is not immigration, it has been emigration."—Angus Robertson

When we contacted the SNP about this topic, they directed us to a recent summary of population changes in Scotland, and said that Scotland’s migration needs have been different to the rest of the UK historically.

But people also move there from the rest of the UK. Including this, the population of the Highland council area alone actually grew due to migration last year, while the wider Highland region saw a slight fall.

“Will the Chancellor confirm and explain as the House of Commons Library and ONS figures for 2015 clearly show, that whereas we export 44% of our goods and services within the single market, why it is that in relation to the other 27 member states we run a disastrous loss or deficit on these exports of £68 billion per annum, up £9 billion since last year alone”—Bill Cash MP

It’s correct that, in 2015, 44% of our exports went to other EU countries. That proportion is falling over time, and was over 50% a decade ago.

Bill Cash actually mentions the ‘single market’ which includes more countries than the EU. Depending on whether you include Switzerland in that, it can push the figure as high as about 50%.

Meanwhile we have a trade surplus with the rest of the world—meaning we export more than we import.

The trade deficit with other EU countries has been growing since 2012. That’s because while our imports to the rest of the EU are continuing to grow year on year, our exports are falling.

“The Public Administration Select Committee has now published three legal opinions from Speaker's Counsel which make it perfectly clear that it is illegal for the government to keep their pro-EU propaganda up on the government website during the purdah period.” —Bernard Jenkin MP

The government’s lawyers disagree with parliament’s lawyers on whether the government is allowed to keep its pro-Remain referendum website, “Why the Government believes we should remain”, up after Friday. That’s when special ‘purdah’ restrictions on public bodies publishing information about the referendum kick in.

Mr Jenkin argues that keeping the website live is clearly “publishing” information and so against the law. This view is, indeed, backed up by three separate notes from the Speaker’s Counsel Michael Carpenter, a lawyer who works for the House of Commons.

The government says that it will not be updating the website, only keeping existing material up, which its lawyers argue isn’t “publishing” as that only applies to online material “made available for the first time”.

Mr Carpenter did not find this explanation “at all convincing”, saying that it’s not supported by the “plain and ordinary meaning” of the rules, and pointing out that keeping the website online would count as publishing under both libel law and copyright law.

The Electoral Commission agreed, but thought that the government wasn’t breaking the law because of an exception for people “specifically seeking access” to information. It argues that “provided the website is designed in such a way that members of the public need to take active steps to seek access to the content”, there is no breach of the rules.

While the government are going to remove the current links to the referendum website from other pages on gov.uk, Mr Carpenter’s view is that coming across the website while googling for information on the referendum isn’t “specifically seeking access to it” - so the government would still be breaking the rules by keeping it live.

If the government stands firm, the courts might be asked to decide what the law requires.