Are grammar schools facing a crisis of funding?

“Many of the 163 grammars are facing a crisis under May, even though she promised to champion them. Some get less than £4,500 per pupil, among the lowest funding in the UK. Other state schools can receive as much as £8,000.”

On average, grammar schools in England received around £4,500 per pupil, while other state schools received £5,200.

It’s been reported that the new formula used to fund schools will boost grammar school budgets relatively more than other schools in coming years.

How is the money shared out?

Grammar schools are selective state secondary schools found in England and Northern Ireland. There are 163 grammar schools in England, which the claim refers to, so we’ll focus on the schools there.

Schools get different kinds of funding. The vast majority of school funding comes from “basic entitlements”, with the rest coming from other grants such as those based on how deprived pupils at the school are.

Grammar schools however receive much less in other grants than other comparable state schools. For example, they receive about £250 per student less in deprivation funding, reflecting the fact that pupils in grammar schools are from relatively less disadvantaged backgrounds than pupils at other state schools

They also receive around £250 less in other funding sources.

For example, no grammar school received money for funding private finance initiatives (PFI) costs while around 100 other state schools did—as much as £2,100 per pupil in one school. 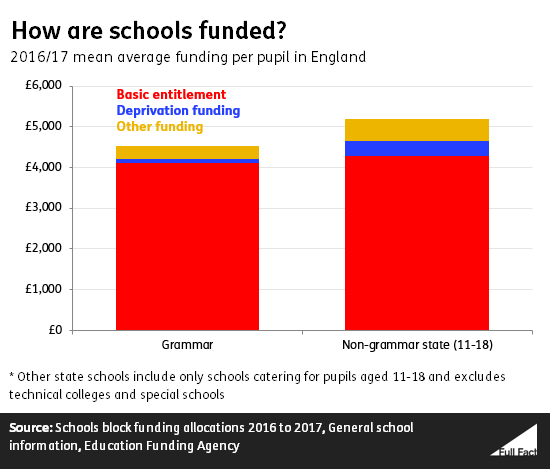 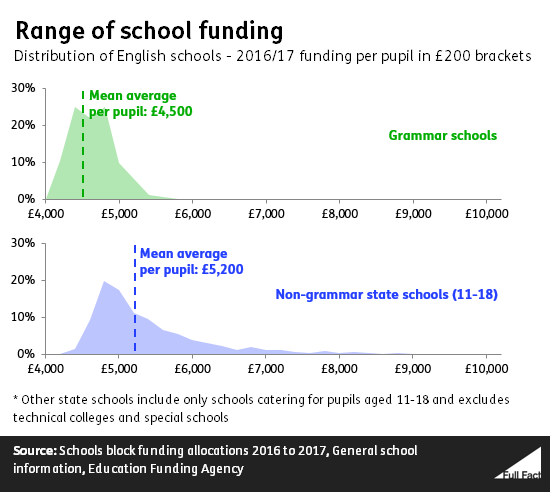 We’ve excluded the “education services grant” from our calculations. This is given to academies to “cover the cost of the services that local authorities provide centrally to maintained schools but that academies must secure independently”. Including the grant for academies only would skew the overall data when trying to compare grammar schools with other schools.

Finally we’ve used 2016/17 funding data rather than 2017/18 funding data. That’s because information about the types of schools (for example whether a school is a grammar or another type of state school) is only available from 2016/17.

Grammar schools receive less than nearby state schools in most areas

School funding is allocated primarily based on each local council’s funding formula which means there are big differences in school funding between regions. You can view an interactive map here. 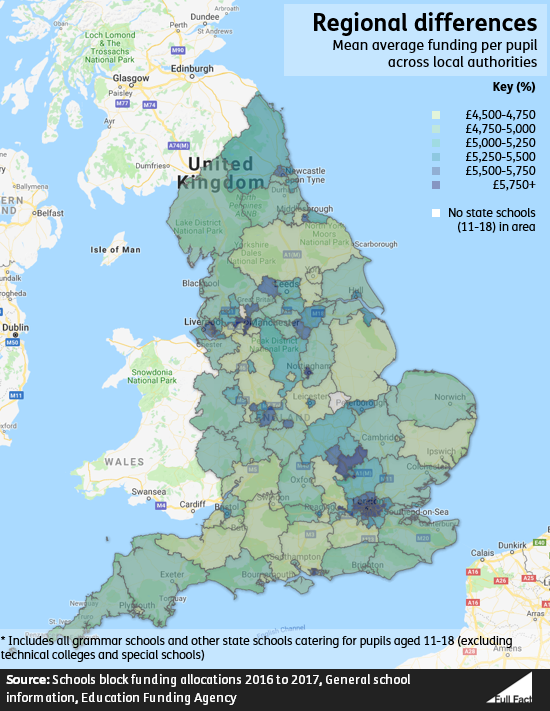 Once that is taken into account, grammar schools generally receive less funding than other state schools in the same area.

You can find an interactive map of the data here.

The reason why schools receive such different amounts is partly down to the individual characteristics of each school, but also down to how funding has been managed historically.

Up until recently, the government has decided how much of the budget to hand over to each council, largely based on how much each council has received per pupil in previous years. In 2016/17, the year which the data above refers to, this was still the case.

Each council then uses a local funding formula to share this money out to local schools. They take into account several factors such as pupil numbers, deprivation, and prior attainment.

Although outside of the control of councils, the money used to fund academies and free schools is still calculated using the local funding formulas.

The old funding system has been widely seen as flawed

The Institute for Fiscal Studies, the Education Policy Institute (EPI) think tank, the government, and others have all said the old funding system is flawed and awards money inconsistently.

Part of this is intentional, the IFS has said, because of deliberate choices by the government to target funding towards disadvantaged schools and areas with higher costs.

But some variation has been more unintentional.

You can read more about how the school funding system works here.

We've updated the graphs and article to clarify that special schools are excluded from the calculations.