Class sizes under the Conservatives

Class sizes are soaring under the Conservatives.

“We have a crisis in school places and class sizes soaring thanks to [Theresa May’s] government.”

There's an extra 0.7 pupils—not a unit of measurement known to teachers—in the average primary school class since 2010. That’s according to official statistics, covering state-funded primaries in England only.

But in secondary schools, the average class size has inched down since 2010, and has dropped noticeably over the course of the decade.

There’s a legal limit on the size of infant classes, which are for the very youngest pupils: 30 pupils to one teacher, with some exceptions. Despite this, the number of children in an infant class larger than 30 has tripled since 2010, although it did fall between 2015 and 2016.

These figures are an all-England average for a particular day in January of each year; individual schools and teachers will have different experiences. 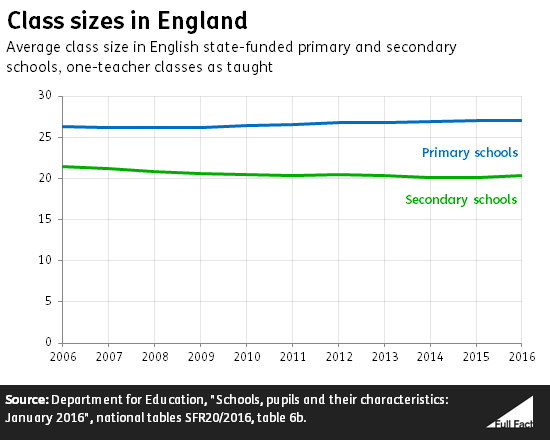