"'Under this government nearly 80% of new primary places created are in good or outstanding schools.'

Department for Education spokeswoman quoted in a BBC article, 17 July 2014

Amid the news last week that the number of pupils in England's schools is now expected to reach over 8 million by 2023, the Department for Education stressed that they had already created 212,000 new primary places (where the need is currently greater than secondary schools) - with the majority in good or outstanding schools.

The number of 'new' places is actually higher. Official statistics show at least 238,000 new primary places were created between May 2010 and May 2013, and 80% of them - or 187,000 - were in schools judged good or outstanding by Ofsted. This is just counting those in schools which had been inspected by Ofsted by August 2013, and doesn't include new places in free schools - so the total figure is higher. It's too early to say whether including free schools in this count would push the balance more towards the higher or lower range of Ofsted ratings.

In the same period, the net increase in primary school places was about 212,000 - backing up the Department's claim. This counts the loss of places too, where schools have shut down for example - so it gives an accurate picture of how many more places exist for the increasing numbers of children in or due to be in primary school.

But, having the two references to 'new primary places' is a little confusing as they do refer to different things.

80% of new primary places in good or outstanding schools 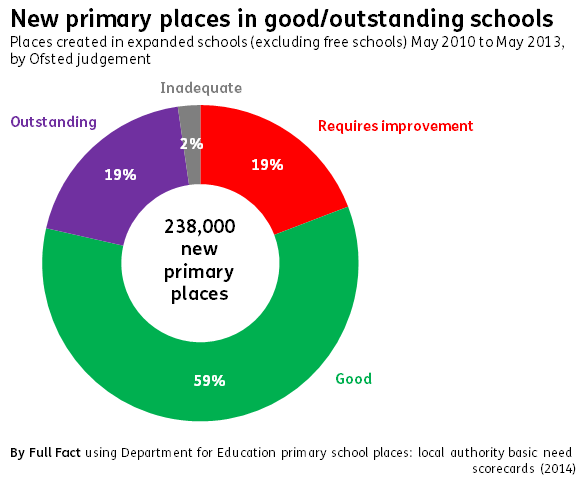 The latest forecasts by the Department show the number of pupils in primary schools is expected to increase to 4.7 million by 2023 - 9% higher than the number now. This is actually slightly lower than the rate of growth previously predicted as the Office for National Statistics now expects fewer babies to be born in the next few years than they'd forecast previously.

While secondary-aged pupil numbers have been falling since 2005, the latest statistics estimate that these numbers will start to grow from 2015 as the increasing primary school population flows into secondary, so we may see a growing focus on increasing places in secondary schools in the future too.

Total primary places have increased by 212,000

This refers to the total increase in school places, with 211,930 more places in May 2013 than in May 2010. This time it includes places in free schools and academies, and refers to the net increase - so accounts for the loss of places too.

It's not possible to say from this figure how much of the increase was in schools judged good or outstanding, since it is a net figure.

If you want to know how all of this relates to your local area, take a look at the Department's local authority scorecard.