There are 1.8 million more children in good or outstanding schools.

Correct. 1.8 million more pupils were in good or outstanding schools in 2016 than in 2010. This progress is partly due to Ofsted's changing inspection practice.

There were 1.8 million more pupils in good or outstanding rated schools in England as of August 2016 compared to August 2010.

The total number of pupils has increased every year since 2009, but the proportion of pupils in good or outstanding schools has also increased. 86% of pupils were in one in August 2016, compared to 66% in August 2010.

There have been much smaller changes in the proportion of pupils in ‘outstanding’ or ‘inadequate’ schools, which have risen and fallen a little each year. 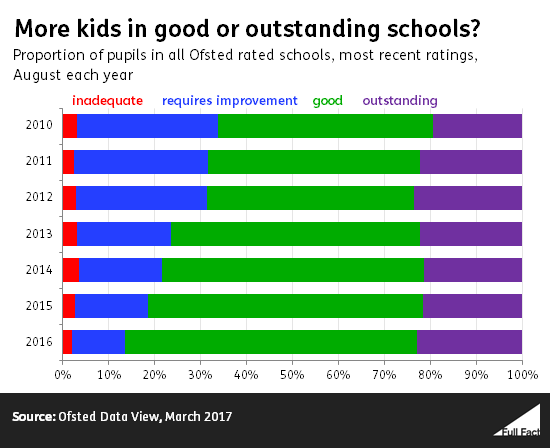 Schools are improving, but there are also variations

Improvements in primary schools have been concentrated in deprived areas and those with poor schools. However, the proportion of children in good or outstanding primary schools ranges from 100% in some areas to 69% in the Isle of Wight.

In secondary schools the gap between the North and Midlands and London and the South East has widened. There’s also much wider variation between areas at secondary than at primary, from 100% in ‘good’ or ‘outstanding’ schools in some parts of London to below 50% in other parts of the country.

The results are affected by Ofsted’s inspection practices

In 2012 it changed from rating schools ‘satisfactory’ to ‘requires improvement’. The majority of secondary schools that were rated satisfactory are now good or outstanding. A fifth have since closed, with more poorly rated schools planning to close. Where they become new academies they’re not counted until the new school is inspected.

Ofsted also focuses inspections on poorly performing schools. This means areas with low rating have more opportunity to show improvement and the best ones aren’t routinely inspected. There’s a growing number of outstanding schools where that inspection took place more than nine years ago.

Since we factchecked this, new figures for March 2017 have been released. These show that there are still around 1.8 million more pupils in good or outstanding schools since 2010.

We updated this piece to mention the latest figures for March 2017.