Ofsted hasn’t inspected 300 schools for a decade or more

Last year, 91% of school places created were in good or outstanding schools.

Correct. Between 2015/16 and 2016/17, 91% of new primary and secondary school places were created in schools that were last rated good or outstanding.

“A National Audit Office report found 1,620 schools, mostly outstanding, had not been inspected for six years or more, and 290 for a decade or more.”

“Last year, 91% of school places created were in good or outstanding schools.”

It’s correct that 1,620 schools had not been inspected by Ofsted for at least six years as of August 2017. That’s according to Ofsted data analysed by the National Audit Office (NAO). 97% of those schools (1,570) were rated outstanding at their last inspection, while the remaining 3% (50 schools) were rated good.

296 of these schools had not been inspected for between 10 and 11 years. All of these were rated outstanding at their last inspection.

Why haven’t they been inspected?

There are around 21,500 state-funded schools in England, teaching around eight million pupils, that Ofsted inspects. It can give four types of rating for the overall effectiveness of a school: outstanding, good, requires improvement or inadequate.

Ofsted has to inspect schools every five years, unless the school was last graded as outstanding. Outstanding schools are exempt from routine re-inspection, but may be inspected sooner if concerns are raised or there’s a significant change.

Outstanding special schools, pupil referral units (which provide full-time education for permanently excluded children or those who have missed school because of illness) and state-funded nursery schools are not exempt, and will usually have short inspections every four years. The same goes for schools rated good.

Schools rated good are also subject to shorter one-day inspections every four years, and schools that require improvement usually have a full re-inspection within two and a half years.

Schools that convert to academies are considered to be new schools. The new academy will usually be inspected by Ofsted within three years of reopening. That said, the NAO found that between 2012/13 and 2016/17 312 schools that had converted to academies went at least five years before being inspected.

What does that mean for schools?

Ofsted’s director of corporate strategy reportedly agreed with the statement that some outstanding schools weren’t “really outstanding”. The NAO’s report said: “The older an inspection judgement, the greater the risk that it is no longer accurate.”

As of August 2017, 20% of schools, including primary, secondary, special schools and pupil referral units, had been rated outstanding for overall effectiveness by Ofsted at their last inspection. 65% had been rated good, 9% required improvement, 2% were inadequate and 4% hadn’t yet been inspected. This does not include education providers that are solely nurseries or sixth forms. 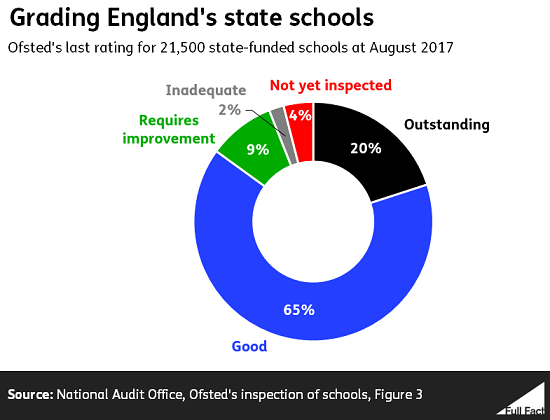 The data was collected by local authorities by measuring school capacities between May 2016 and May 2017. Not all school places were included, for example free schools (schools funded by central government, not run by the local authority) and sponsored academies that hadn’t yet had an Ofsted inspection. Increases of fewer than 15 places in a school weren’t counted as new places.