97% of schools who submitted data had children coming back in early June.

This is not true. 97% of schools who submitted data were open, but only about two thirds of them had children coming back.

"97% of the schools that have submitted data are now seeing kids come back to school."

During Prime Minister’s Questions on 10 June, Boris Johnson said that children were returning to 97% of primary schools which submitted data on this.

This is not true. Data now published by the Department for Education (DfE) shows that on the day the Prime Minister made his claim, 69% of the primary and nursery schools in England which submitted data were open to returning children. On average, during the first week of reopening, the number was 49%.

Full Fact asked Number 10 where Mr Johnson’s 97% figure came from, and we have not heard back. However, it seems to refer to how many primary schools were open in any form. This includes those that remained open only to vulnerable or key worker children.

These schools were therefore not “now seeing kids come back”, as the Prime Minister said.

Who is back at school?

The government asked schools to reopen more widely to children in nursery, reception, year one and year six from Monday 1 June.

Before this, from 23 March until 1 June, schools were closed to all children except those deemed vulnerable, or whose parents were key workers. Many therefore remained open in this limited way.

DfE estimated that 45% of all schools and nurseries at least partially reopened to returning students in the week beginning 1 June, and 61% on the day Mr Johnson made his claim.

These figures get larger if you only count schools which submitted data, because schools which are closed were less likely to respond to the DfE survey. If we count only those schools which responded, as Mr Johnson did, we get the average of 49% in the first week of reopening, and 69% on 10 June. 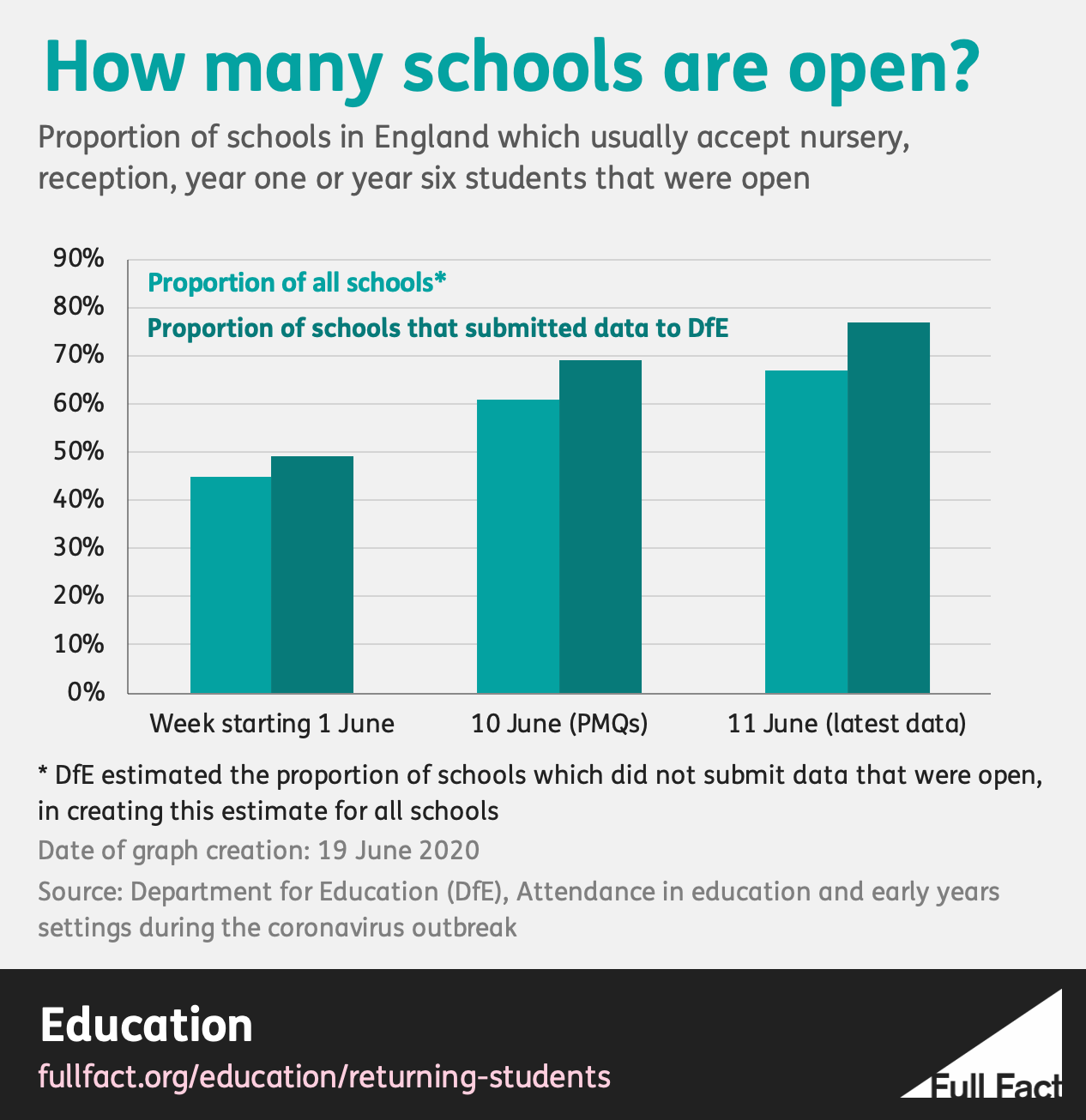 What is happening in schools now?

DfE data currently goes up to Thursday 11 June. On that day, 77% of responding schools were open to returning children. The DfE estimates that 67% of all schools in England were open in this way.

It is important to say that while 67% of schools may be open to these year groups, that doesn’t mean that 67% of those students have returned to school.

Even among those schools which are now open for these year groups, just 19% of nursery students, 32% of reception students, 29% of year one students and 39% of year six students had returned.