Funding for schools is down by 8% in real terms.

The OECD has ranked the UK as the third highest for education funding.

This includes private spending, so isn’t an accurate reflection of government funding. In terms of public spending on education, as a percentage of GDP, the UK ranked joint-fourteenth out of 34 OECD countries that provided data in 2015. Education spending in the UK is devolved.

There is more money going into our schools than ever before—a record £43.5 billion by 2020.

“there is more money going into our schools than ever before—a record £43.5 billion by 2020… the IFS found that real terms per pupil funding in 2020 will be over 50 per cent higher than it was in 2000. It is true to say that the OECD has ranked the UK as the third highest for education funding… this includes tertiary and private education for every country.”

"We have consistently argued that funding for schools is down by 8% in real terms. The National Audit Office agrees, the Institute of Fiscal Studies agrees, parents can see it is true, as can the electorate."

This week, the UK Statistics Authority wrote to the Department for Education expressing “serious concerns” about the Department’s “presentation and use of statistics” about school funding.

We’ve written a blog post about the government’s responsibility to use statistics accurately and honestly, and the potential damage to public trust in institutions if it doesn’t do so.

But turning away from these broader issues, what’s the reality behind the numbers that the government presented on education spending? Whilst their figures were correct in a narrow technical sense, they were presented out of context, in a way that gives a misleading overall picture.

The government claimed that funding for schools will be at a record level by 2020. This is doesn’t factor in inflation, and it also doesn’t consider spending per pupil so it’s not particularly meaningful. Spending per pupil in England fell by 8% in real terms from 2009/10 to 2017/18, and will be held constant from 2017/18 to 2019/20.

The government also said that the OECD has ranked the UK as the third highest for education funding. This is correct, but largely meaningless. It includes private spending on education, so doesn’t accurately reflect government spending. In terms of public spending on education, as a percentage of GDP, the UK ranked fourteenth out of 34 OECD countries that provided data in 2015.

It should also be noted that education spending is devolved in the UK, so these OECD figures reflect the joint record of each of the four governments in the UK.

The government says that more money is going into our schools than ever before, but on its own that doesn’t tell us a huge amount. There will be more pounds in the budget for schools than ever before by 2020, but that doesn’t factor in either inflation (the rise in prices over time), or increases in the number of pupils. These factors mean it might be necessary to increase funding each year just to be able to fund schools to the same standard as before. A better measure of school funding is the amount spent per pupil, adjusted for inflation (also known as “in real terms”).

Elsewhere in the same release from the Department for Education, the government has framed its figures in real terms per pupil, even making reference to the same IFS report we’ve looked at. It says: “The Institute for Fiscal Studies figures show that real terms per pupil funding in 2020 will be more than 50% higher than it was in 2000.”

UK spending on education is about average among OECD countries

The government also compares its spending on education with that of other countries. In so doing, it supplies yet more correct but unhelpful statistics: “the OECD has ranked the UK as the third highest for education funding” in terms of spending as a percentage of GDP.

The data it refers to includes private expenditure (things like university tuition fee loans, and scholarships), so it isn’t an accurate reflection of government spending on education. The Organisation for Economic Co-operation and Development (OECD) is a membership organisation consisting of 36 countries “dedicated to economic development”. It includes most EU member states and “many of the world’s most advanced economies”.

If we look just at public spending on education, the UK ranked joint-fourteenth out of the 34 OECD countries that supplied data, and is exactly in line with the average level in the OECD (4.2% of GDP). This covers primary to post-secondary education, and refers to the year 2015. It should also be noted that it covers the whole of the UK, whereas the schools spending figures only cover England. As education funding is devolved in the UK, the OECD data reflects the records of the four regional governments. 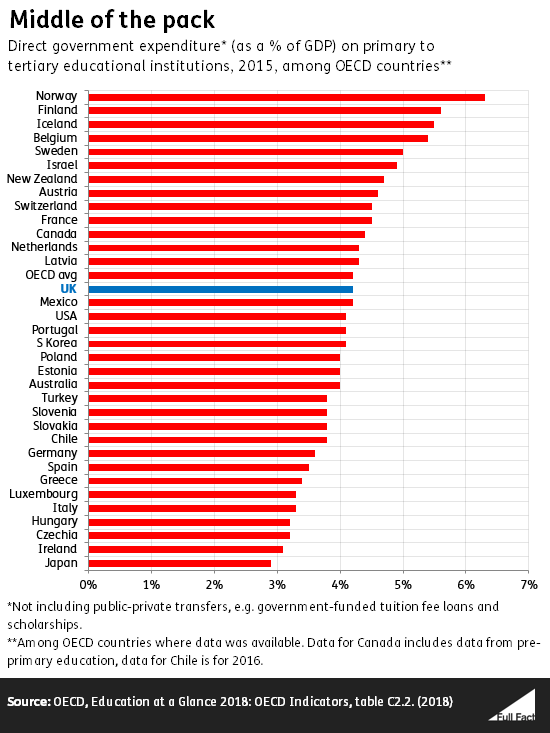 The UK performs slightly better (sixth out of 25 countries with available data) if you include public-private transfers of funds. Public-private transfers include things like government loans for paying tuition fees, or funding for scholarships. As most of the UK’s public-private investment is in tertiary education (broadly meaning university), it’s likely that most of this comes from loans for university tuition fees, which students have to pay back (although it’s likely that many won’t pay them back in full). Most people probably wouldn’t think of this as public investment in education.