The £20.5 billion NHS England spending increase is the largest five year increase since the mid-2000s

The NHS is getting an extra £34 billion, that’s the biggest increase in modern memory.

“This one-nation Tory party that has already embarked on the biggest cash boost for the NHS for a generation.”

“In this one nation conservative government we’re putting record sum in [to the NHS], £34 billion.”

“The figure that we're spending is £34 billion - it’s the biggest increase in modern memory in the NHS.”

The Prime Minister claimed many times throughout the campaign that the NHS is receiving £34 billion. He’s described this as the biggest spending increase in modern memory, or a record sum or the biggest boost for a generation.

Whether or not you think this is the biggest increase in living memory really depends on how good your memory is, and it’s certainly not the biggest spending increase ever over five years. If we account for inflation—the meaningful way to look at spending over time—the last time there was a larger spending increase on health in England was between 2004/05 and 2009/10.

Whether or not you count inflation, the funding that’s been announced for the NHS won’t be enough to address future issues the service will face, according to expert think tanks.

The spending increase over five years

Last year the government pledged to give the NHS in England £20.5 billion over the next five years to 2023/24, adjusting for inflation (the fact things have got more expensive to buy over the years). Despite Mr Johnson saying this number was “not correct” when asked about it on BBC Breakfast, it is. He instead referred to the amount in “cash terms” (in other words, not adjusted for inflation), which is £33.9 billion.

That does seem to be the largest cash terms increase over five years based on data collated by the House of Commons Library for total health spending in England going back to the late 1970s. But that’s not a very useful way to look at the numbers as it isn’t in “real terms” (or adjusted for inflation).

This isn’t an exact comparison. The historical figures we’re looking at are for all health spending in England. The government only recently started splitting out how much it spends on the NHS specifically, as opposed to non-NHS spending like public health, IT, buildings and training.

What the government chooses to spend on these areas in the coming years will make a difference to the NHS too. In January 2019 the National Audit Office (NAO) said that “Spending [in areas not in NHS England’s budget] could affect the NHS’s ability to deliver the priorities of the long-term plan, especially if funding for these areas reduces.”

At the moment, we only know what the full budget of the Department of Health and Social Care will be until 2020/21. In 2019/20 and 2020/21 spending on non-NHS services will fall by over 12%, according to the Institute for Fiscal Studies.

We can also look at the percentage increase in spending each year between 2018/19 and 2023/24 and compare that to historical trends. Looked at this way the increase is set to be around 3.3% per year according to the Health Foundation. That’s above the average annual increases over the last decade, but below the historic average of 3.7% per year since the NHS was founded.

Total public spending on health and the NHS

The Conservative party has made a number of claims on NHS spending over the last year or so. Back in December 2018, the government, then led by Theresa May, described it as the “biggest ever funding increase for the NHS”. On a number of occasions the government and its predecessor have also hailed the spending as a “record investment” in the NHS. During the BBC Breakfast interview Mr Johnson also described NHS spending as being “record”.

Given the ambiguity around the way this claim is sometimes made it’s also worth looking at what has happened to the total budget for health spending.

This is the largest it has ever been, whether or not you account for inflation. That’s not surprising as departmental budgets tend to generally increase as both the population and economy grow. 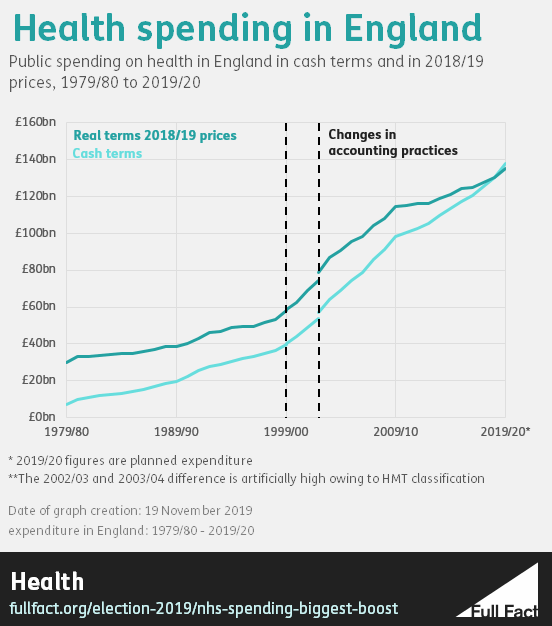 We can also look at health spending across the UK. The UK government is only directly responsible for health spending in England (though the devolved governments in the rest of the UK do see their budgets increased as a result of the Barnett Formula when NHS spending grows in England).

If we look at that spending as a proportion of the UK economy, it was 7.2%. As we’ve already said, we don’t yet know what the final picture on all health spending is going to look like, but the Health Foundation think tank has said that if the increase in spending for the NHS England settlement was “seen in areas outside of NHS England such as capital spending and the public health grant (and replicated in the devolved administrations) then spending could grow to 7.9% of GDP.”

The previous spending high was 7.6% of GDP in 2009/10, so if non-NHS England spending was increased in this way it is possible health spending could be at a record high by 2023/24.

How far does that money go?

Of course none of this tells us whether the NHS has enough money.

The King’s Fund health think tank has said: “While the new NHS funding deal will ease current pressures, it is not enough to simultaneously restore performance against key waiting times standards and transform services to deliver better care.”

When the 2020/21 budget for the Department of Health was announced, the Health Foundation said: “The 2.9% increase for the Department of Health and Social Care falls short of the absolute minimum of 3.3% needed to maintain care and start to address the growing NHS workforce crisis, and puts at risk the ambitions to improve the health service laid out in the NHS long term plan.”