We've checked their claims on the tax gap, and the impact of leaving the EU on the UK's economy and borders.

Brexit and the Economy

“If we vote to leave we will see economic consequences for this country and jobs will be lost. It isn’t scaremongering, it is a statement of fact”—Owen Smith MP

There are lots of forecasts, predictions and opinions about what would happen to the British economy if we left the EU. None of them are statements of fact at this point.

The impact of a vote to leave would depend on the trading arrangements between the UK and remaining EU countries, and the economic policies of the government. We can’t predict either of these.

That said, people can make judgements. While not all economists agree, there is a consensus among most of them that leaving the EU would come at some economic cost.

It's not right to describe these as 'jobs created'. The figures show changes in employment.

The UK’s employment growth has been more than the rest of the EU combined over certain periods—for instance since 2010, which Mr Hannan referred to in a column this week.

But that's only because in some EU countries—like Greece and Spain—employment fell, dragging down the rest of the EU's overall change.

Germany and Poland alone had higher combined employment growth than the UK, for example.

It's not clear what time period Mr Hannan means when he talks about since the referendum was declared. The figures only go up to last Autumn.

“Isn't it true that the only way to have control over UK borders and immigration is to leave the European Union?”—Audience Member

This is right as things stand in terms of immigration. In terms of borders, we already have control over them in the sense of being able to check everyone who comes in.

The UK can check passports at the border, whereas EU countries in the passport-free Schengen area generally don’t. People who don’t have a valid ID can be turned away.

But the EU right to free movement of workers and their families means we don’t control immigration from other EU countries. EU citizens who can prove their identity can, with limited exceptions, live and work here without a visa.

That doesn’t mean that immigration would automatically be reduced by a large amount if we left. It would partly depend on what deal we struck with the EU, and on whether a reduction in EU immigration affects employer demand for non-EU immigration.

We already control immigration from outside the EU, which accounts for about half of immigration into the UK.

“Norway has a higher proportion of immigrants versus its country than the UK does. So does Switzerland”—Owen Smith

That’s correct. Norway and Switzerland, neither of which are EU members, both had more immigrants per person than the UK, as of 2013.

In fact, the percentage of immigrants in their populations is higher than almost any EU country, according to the European statistics agency.

The same is true if you look just at EU immigrants in those countries. EU citizens accounted for 16% of the Swiss population as of last year and 6% of Norway’s, whereas under 5% of the UK population were citizens of another EU country.

In 2014, Switzerland voted in a referendum to cap immigration from the EU. This was criticised by the EU as against the rules of a treaty on the free movement of people. A lot of commentators say it’s made the Switzerland-EU relationship more difficult.

The link between free movement of people and access to the EU single market for these countries is why reducing EU immigration to the UK may mean having to give up that access if we were to leave.

"What about all the Brits that go abroad? We’ve got a million Brits living in Spain, two million in the rest of the EU"—Baroness Jones

These figures are too high. Only 1.2 million people born in the UK live in other EU countries, according to 2015 data from the United Nations. Spain hosts the largest number of Brits at an estimated 310,000. 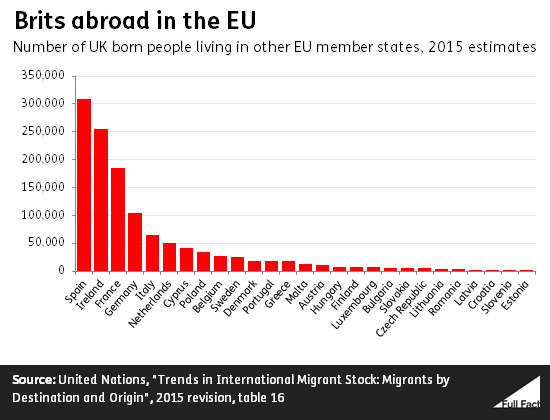 "Just over £1 billion is estimated to go in the direction of abuse of benefits. The tax gap—that is from people who evade it and avoid it—is more than £30 billion"—Angus Robertson

The two biggest components of the tax gap are the ‘hidden economy’—for example people moonlighting—at £6 billion and ‘criminal attacks’ like smuggling and VAT fraud at £5 billion.

What HMRC officially calls ‘evasion’ or ‘avoidance’ makes up £7 billion of the tax gap.

The tax gap also includes a level of genuine error, estimated at £2.6 billion.