EU facts behind the claims: borders

"The Schengen system forbids countries from carrying out systematic checks on anyone with an EU passport from entering the EU. This makes it much easier for jihadists to enter from the Middle East… outside the EU, we will continue to co-operate with our European partners to fight terrorism and organised crime." (Leave)

"In today’s world, many of the threats to Britain's security are global in nature—like the aggression of Russia, terrorism and cross-border crime. Being in Europe, working with our closest neighbours and partners to tackle these threats, makes Britain safer." (Remain)

Unlike most other EU member states—and some countries outside the EU—the UK is not part of the Schengen passport-free area because it hasn’t signed the Schengen agreement. This means it can retain border controls. 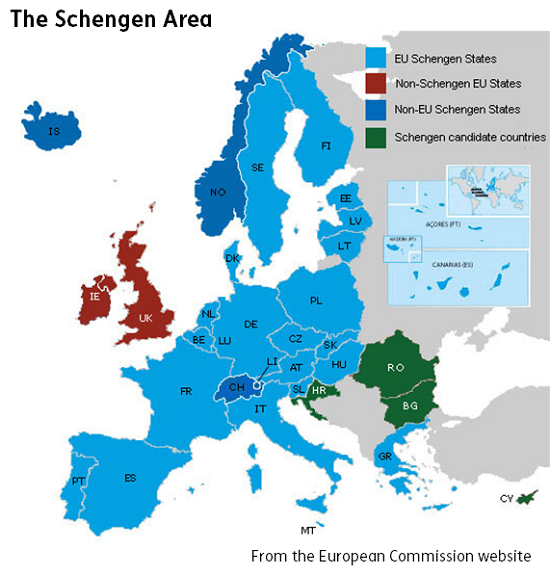 But the UK does operate the Schengen Information System (SIS) which allows the UK to exchange information with Schengen countries for the purposes of cooperating on law enforcement.

The EU’s member countries, including the UK, collectively control the EU’s external borders through their own management of their national borders.

Controls at the UK border

The British government retains full control over its own border controls. Travellers who hold EU passports can’t cross the UK border without having their passport or identity checked, and the same applies for travellers from non-EU countries.

The exception is people travelling over the Northern Ireland-Ireland border where there are no border checks.

The UK can, and does, perform passport and identity checks at its borders and refuses entry to travellers who do not travel with valid identity documents even if they are from another EU member state.

The benefit of holding an EU passport, or being the citizen of a European Economic Area (EEA) country (Norway, Iceland, Liechtenstein) or Switzerland, is that you travel through a separate channel at UK border controls. This normally results in a swifter identity check.

Non-EU citizens need to conform to all the UK’s border and immigration checks, even if they’re travelling from the EU, and are checked in a separate channel from EU, EEA and Swiss citizens. Citizens from outside the EU also face different visa, or visa waiver, requirements depending on the purpose of the visit and its duration.

There’s no difference here if the person is travelling from a Schengen or a non-Schengen country.

The requirements to enter the UK from outside the EU (for example, whether you need a visa) are a decision made by the UK government.

What this means for terrorism

Terrorism, just like many other crimes and other threats to countries’ security, operates across borders.

Concerns have been raised that terrorists may take advantage of refugee routes to Europe. As the UK retains its own border controls and national control over asylum-seeking processes it has the capacity to address any such development itself.

In recent years, there’s also been more focus in the UK on ‘home-grown’ terrorism, as the House of Commons library and others have said. The government has been developing policies to counter the development of extremist beliefs among UK citizens identified as vulnerable to radicalisation.

According to UK in a Changing Europe Fellow Richard Whitman, collective information sharing has evolved on criminal justice issues between the EU’s member countries to help them apprehend criminals, including sex offenders, people traffickers and terrorists, by unifying the procedures for and speeding up extradition and distributing security related information among EU members.

The UK has chosen to ‘opt in’ to some of these arrangements and cooperate collectively with other EU countries through the SIS, European Arrest Warrant (EAW), European criminal records system and EU-Interpol cooperation.

If the UK decides to leave the EU it might lose direct access to some these arrangements (such as the EAW which doesn’t currently apply to non-EU member countries). That said, other non-EU member states, such as Norway, still participate in the SIS without being members of the EU and have negotiated similar arrangements to the EAW.

Outside the EU, the UK would be free to decide on which issues and with which countries it would wish to pursue such cooperation. That isn’t much different to the situation now, according to Professor Whitman. The UK also already collaborates with other countries outside the EU, such as the US, on these issues on a one-to-one basis.

This article was written by academic experts at the UK in a Changing Europe initiative, with support from Full Fact, and used as the basis for a feature on ITV News at Ten. Any opinions or professional judgments of the authors are labelled as such.

This article was updated to note that there are no border checks at the Irish border.