Factcheck: Daily Express EU "poll" is biased and wide of the mark

A poll shows that 80% of British people want to quit the EU.

This "ballot" says nothing about the state of nationwide opinion. Recent professional polls show that around 36% to 48% of people support leaving.

"80 per cent of Britons want to quit EU in biggest poll for 40 years."

The story on the front page of today's Express refers to the results of a "ballot" organised by two local Conservative MPs and a parliamentary candidate, and limited to their three neighbouring constituencies in Northamptonshire, according to the paper.

They say they delivered 100,000 "ballot papers" to households over several months in 2014, and counted the 14,581 they got back in the Daily Express offices.

Recent professional polls show that between 36% and 48% of people support leaving the EU, according to the likes of Opinium, Survation and YouGov. The Express exercise doesn't give us a good fix on what the wider public think. 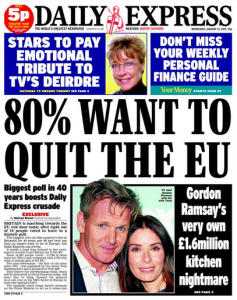 We've pointed out before that polls are only useful if those replying are representative of wider opinion—no matter how many people are asked. The British Polling Council say that surveys where the participants are self-selecting are problematic.

The Express front page does make clear how the ballot was conducted, but both the print and online headlines overstate its importance.