Trade across the Irish border

When the UK leaves the European Union, the economic and legal status of the border between Northern and Southern Ireland could be affected. No one yet knows how it will be affected, but one of the issues is whether trade will still be able to move freely, without customs checks.

Why does Irish border trade matter?

The UK has one land border with another country—that’s the border between Northern Ireland and the Republic of Ireland.

Currently, both the UK and Ireland are in the EU, and within the EU goods and services can cross borders without undergoing any customs checks. When the UK leaves the EU, however, it will have to work out a new arrangement for the Irish border.

We don’t yet know what that arrangement will look like. It could mean customs checks at the Irish border, or there could be checks between Northern Ireland and the rest of the UK instead. The resolution could be something else entirely.

But what we can look at for now is how much trade there is across the UK’s only land border with the EU.

How much trade is there across the Irish border?

Northern Ireland exported about £4 billion worth of goods and services to the Republic of Ireland in 2016.

Are these significant sums?

To put that in context, Northern Ireland’s exports to the Republic of Ireland accounted for 15% of goods and services sold outside of its own borders in 2016 (including to Great Britain).

Technically speaking, “exports” are goods and services which are sold outside of your own country. As Northern Ireland is part of the UK, its sales to the rest of Britain do not count as exports. Around 35% of Northern Irish exports (so not counting sales to Britain) go to the Republic of Ireland. 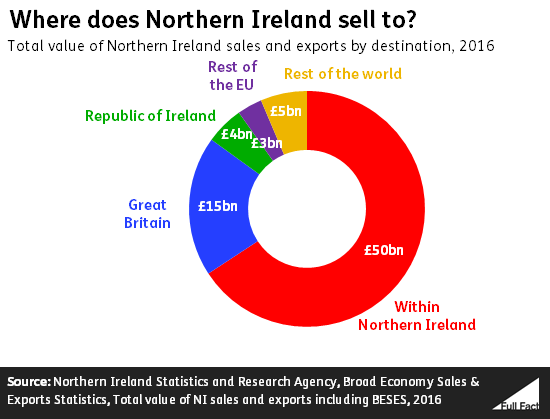 We can’t compare those figures to previous years very easily, however.

Historic data from Northern Ireland did not count as many things in export statistics, for example farming and tourism. Instead of £4 billion in 2016, the old figures would have put it at £3.4 billion.

Using the older figures, we can say that the share of Northern Irish exports to the Republic of Ireland has been falling slowly for the last few years, but it’s not a complete picture.

How much trade goes the other way?

These figures should not be taken as exact as there are often discrepancies between different countries’ trade figures.

These differences are called trade asymmetries, and you can read more about them here.

Trade across the Irish border is not simply each side selling goods to one another. A European Parliament paper notes how businesses which operate across the border “often have highly interconnected supply chains covering the island of Ireland and often involving movements across the border throughout the manufacturing process”.

For example, “In the course of production of Guinness, approximately 13,000 border crossings are made each year”, and “Bombardier, one of Northern Ireland’s largest employers, engages more than 60 suppliers in Ireland.”

Food and agriculture is particularly integrated across the border, according to a 2017 UK government position paper on Northern Ireland:

“When considering cross-border trade, it is particularly important to note the integrated nature of the agri-food sector. Food, beverages and tobacco account for 49 per cent of crossborder manufacturing trade, with, for example, more than 10,000 pigs exported from Ireland to Northern Ireland every week and a quarter of all milk produced on Northern Ireland’s farms exported for processing in Ireland.”

You can read more about the breakdown of cross-border trade here.