EU staff in the NHS: what has happened since the referendum?

There’s been an increase in the number of EU staff in the NHS since the referendum.

Around 4,400 more EU nationals worked for the NHS in England in June 2018, compared to June 2016. But some of the increase could be down to more staff reporting their nationality. The proportion of staff who report they are EU nationals is about the same in 2018 as in 2016.

The number of EU nurses coming to the UK has fallen by 90% since the Brexit vote.

EU nationals have fallen as a percentage of those joining the NHS.

“And in fact there’s been an increase in the number of EU staff in the NHS since the referendum.”

All of the trends picked out in the above claims are broadly correct (even if some of the numbers are not quite right), but none of them tell us very much in isolation.

It’s correct that the number of NHS staff working in hospitals and community health services in England who report they are from the rest of the EU has risen in the two years since June 2016.

However, this has coincided with a fall in the number of staff whose nationality is unknown: so some of the increase could be down to more staff reporting their nationality.

EU nationals made up the same proportion of NHS England staff (whose nationality was known) in June 2018 as they did in June 2016.

“There’s been an increase in the number of EU staff in the NHS since the referendum.”

The number of NHS staff working in hospitals and community health services in England who report that they are from the rest of the EU rose by around 4,400 between June 2016 (when the EU referendum was held) and June 2018. But these figures can’t tell us for certain what the actual increase in the number of staff from the EU is.

That’s because there are some staff in the NHS whose nationality we don’t know (around 71,000 in June 2018)—so the data we have is missing around 6% of the workforce at the time.

The number of staff whose nationality is unreported also fell by 18,000 between 2016 and 2018. So some of the rise in EU nationals could be down to more staff having their nationality recorded. The House of Commons Library says: “while it is likely that there has been an overall increase in the number of EU NHS staff since 2016, we cannot be sure about the scale of the change”.

The information on staff nationality is also self-reported—so this may reflect a person’s country of birth or cultural heritage rather than their country of citizenship.

One alternative is to look at the percentage of staff who report they are from the rest of the EU, based on all staff whose nationality is known. Staff from the rest of the EU made up 5.6% of NHS staff (whose nationality is known) working in hospitals and community health services in England in June 2018. That’s pretty much the same as the level in June 2016 (5.5%).

However to put these figures in context, it helps to look at them over a longer period of time. The number of EU nationals joining NHS England rose in the years before the EU referendum and then dropped off in the years after. The number of EU nationals who joined NHS England in 2017/18 was similar to the number 2013/14 and in both years they made up around 8% of all joiners for whom nationality was known. 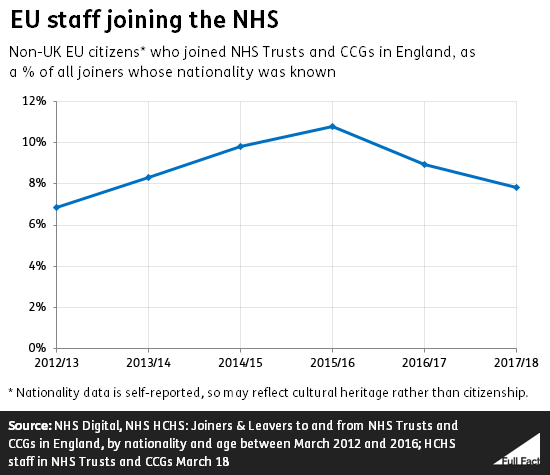 This means we should be careful of linking this sudden drop in EU staff joining the NHS directly to the referendum result. It could be that the number of joiners was exceptionally high in the years just before the referendum—so some level of fall may have been expected, regardless of the result.

We don’t know what would have happened to EU staff numbers if there had never been an EU referendum, or if the UK had voted to remain. So we can’t say how much of the reduction, if any of it, is linked to the actual result.

Looking in the longer term, EU nationals have made up an increasingly large share of those leaving the NHS in each year since 2012/13. 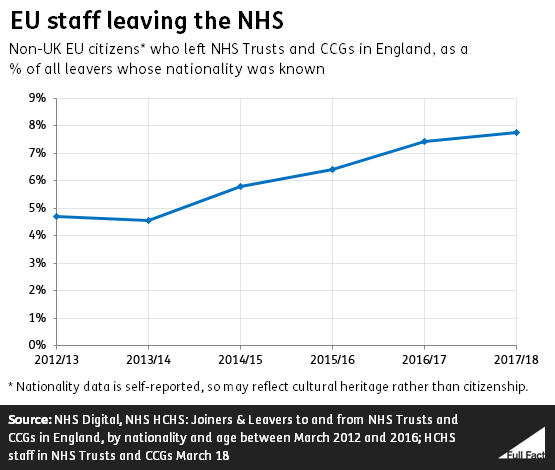 This seems to be based on the number of nurses from the European Economic Area (EEA) who came to the UK and registered to work. To work in the UK, nurses need to join the Nursing and Midwifery Council’s (NMC) register. People on this register can be working in the NHS (in any of the four countries in the UK), the independent sector or perhaps not even working in the profession at all. 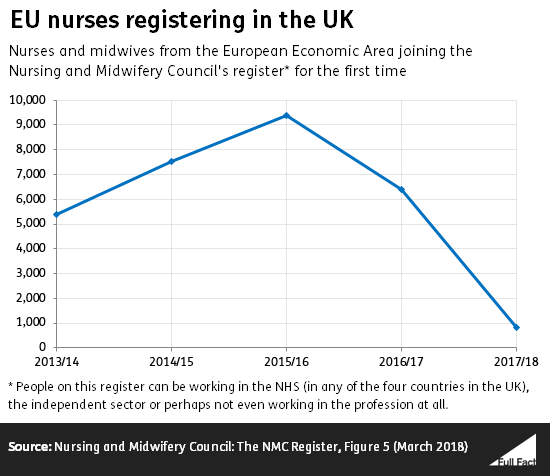 EEA nurses and midwives made up 5.1% of the register in March 2018—a fall compared to March 2017, but higher than the three years before that. 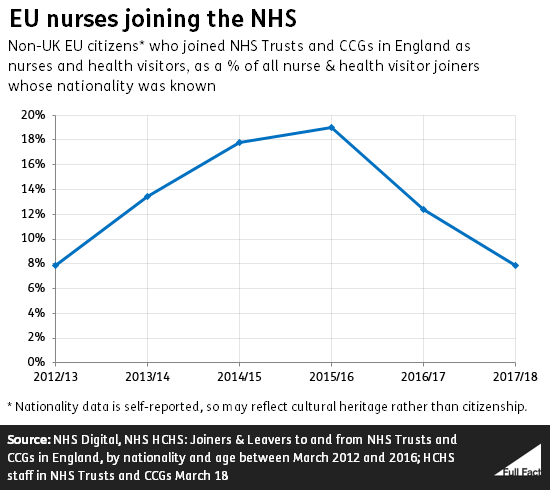 It does seem that nurse numbers have been particularly affected since the referendum. “Nurses and health visitors are the only staff group to record a fall in the number of recorded EU nationals since the EU referendum”, the House of Commons Library points out.

We amended an error in the claim/conclusion boxes at the top of this article. The third "claim" box mistakenly contained the wording of the fourth "conclusion".