The number of nurses and midwives in the UK

Nurses and midwives in England

There were 287,100 full-time equivalent nurses and health visitors working in hospitals and community health services in NHS England in October 2017. There were also 21,900 midwives. 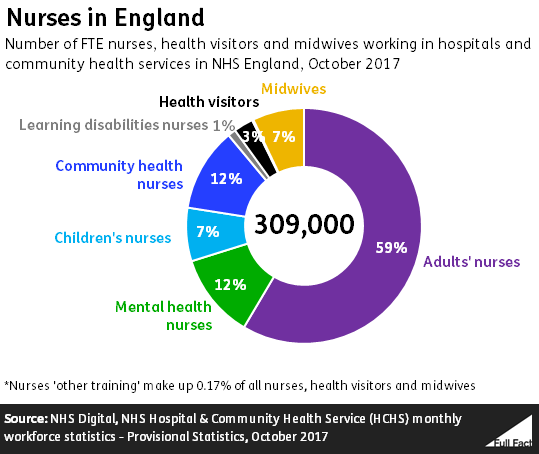 Claims are often made about the change in the number of nurses working in the NHS since the Coalition government entered office in 2010. 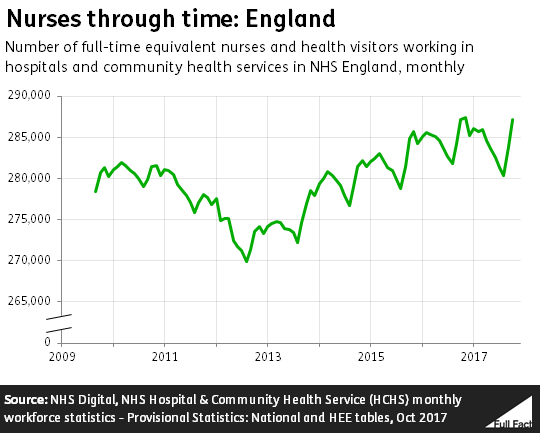 Not all types of nurses have increased in number though. There are around 5,700 fewer full-time equivalent nurses working in community health since October 2010 and 4,200 fewer working in mental health.

It’s been estimated by the Royal College of Nursing that there are around 40,000 vacant nursing positions in England (as of December 2016). That isn’t the same as the number of nurses NHS England needs, it’s the estimated number of vacant posts it has funding for.

Nurses on our wards

The government has made a number of claims about the number of nurses “on our wards” increasing. But when it says this it isn’t quoting numbers for all nurses. It’s referring specifically to nurses working on acute, elderly and general wards for adults in England.

These nurses make up the majority of nursing posts in the NHS, but they don’t represent all nurses who work on wards.

These nurses on acute, elderly and general wards accounted for 62% of all nurses and health visitors working in hospitals and community health services in England—as of October 2017. There are around 13,600 more full-time equivalent nurses working in these types of wards than in October 2010.

Those figures don’t  include nurses who work in other areas, for example in mental health, paediatrics and maternity care. They won’t be included in this number even though some will work on wards.

Nurses working in other areas

Nurses also work in other sectors of healthcare. There were more than 15,500 full-time equivalent nurses working in GP practices across England in March 2017. That’s fallen slightly since the year before.

At the same time there were over 11,200 full-time equivalent nurses and health visitors working in independent sector healthcare – many of whom are commissioned to provide services for the NHS. Because of issues with the way this data is collected NHS Digital, which publishes the figures, say they shouldn’t be compared with other types of nurses.

There were just over 59,400 full-time equivalent nurses and midwives working in NHS Scotland as of September 2017. That’s an increase of around 250 compared to the year before. 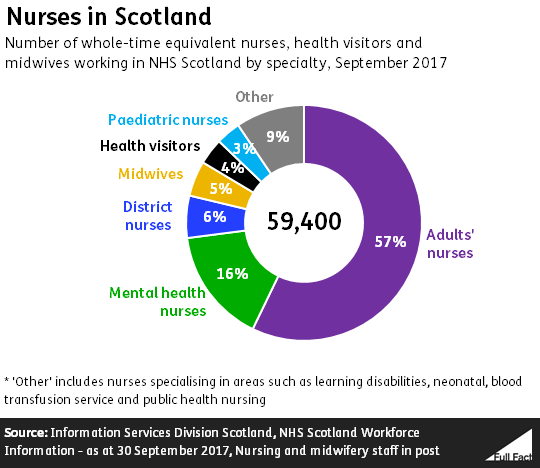 The number of nurses and midwives in NHS Scotland has increased by around 6,200 since September 2002, the earliest figures we have. The numbers have generally been increasing but there was a dip between 2009 and 2012. 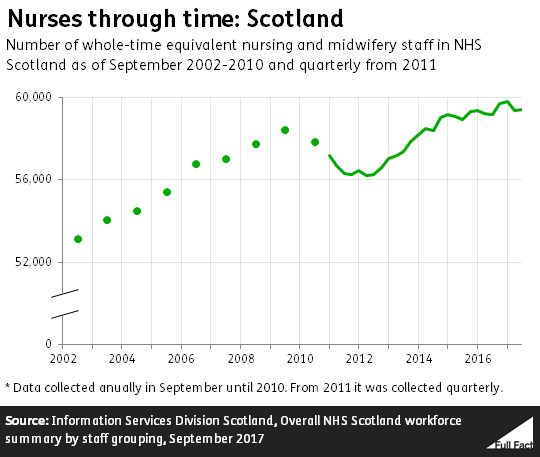 There were 14,900 full-time equivalent nurses and midwives working in Health and Social Care Northern Ireland (the equivalent of the NHS there) in September 2017, the latest figures.

The number of nurses and midwives has increased by around 1,200 over the last ten years (comparing figures for March each year which go back further and give a more detailed breakdown). 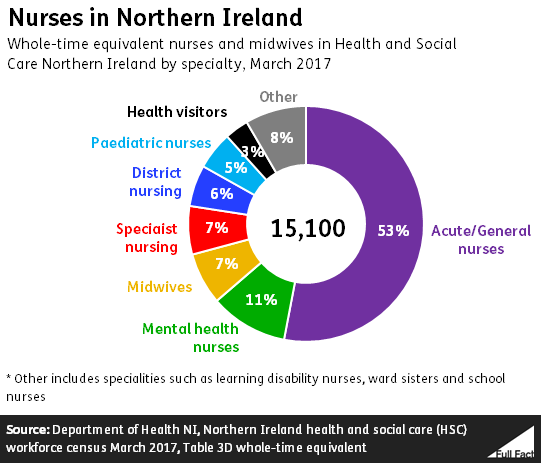 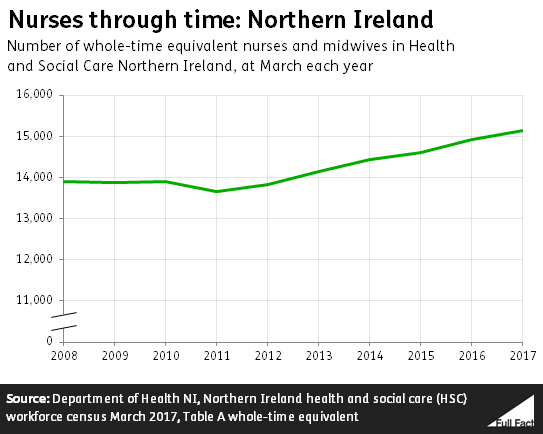 There were around 540 full-time equivalent nurses working in GP practices in Northern Ireland in early 2016. This figure isn’t certain as it was based on a survey of practices that only 54% responded to. 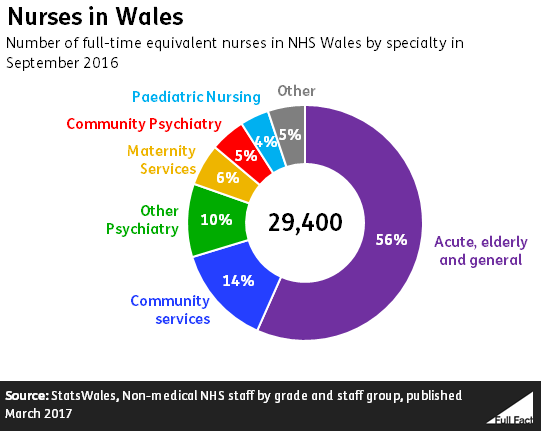 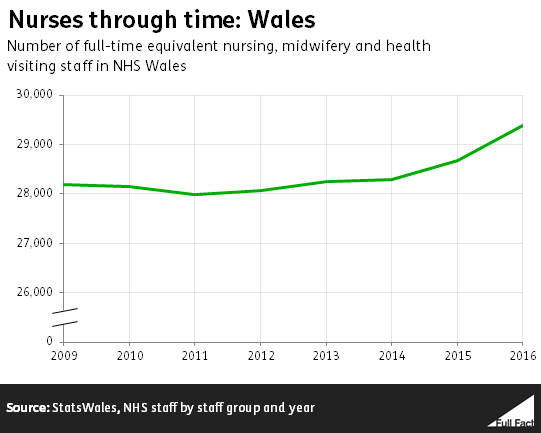 Around 1,300 nurses were working in GP surgeries across Wales as of September 2016. That figure refers to the number of individual nurses though, rather than the full-time equivalent figure.

The figures aren’t a fair comparison though and might understate the fall in nurses registered.

Changes in how nurses and midwives from the UK register with the NMC meant an unusually high number were registered in September 2017 than in previous years. Around 4,000 people who would otherwise had to wait until October to have their application processed, joined the NMC in September. As a result the NMC said that it expected the number of registrations from the UK in October to be lower than in previous years.

Nurses and midwives from around the world

The trend in the number of people on the register varies depending on where they registered from. The number  of people registered, who originally registered from the UK, stayed roughly the same over the 12 months to September 2017 (around 586,000 people). If the changes to registration time hadn’t been made the number is likely to have fallen.

The number of nurses and midwives on the register from the EEA also fell by around 2,700 over the same time – these figures weren’t affected by the change in registration practices.

An NMC survey from last year found that the top reason for leaving the profession was retirement. After that the most common reasons were: workload, personal circumstances and “disillusionment with the quality of care provided to patients”. The survey might not be representative of all nurses and midwives though and we’ve looked at it in more detail here.

The NMC couldn’t tell us how the numbers of nurses and midwives it has registered relates to the numbers working for the NHS. It told us it doesn’t collect this information.

By Claire Milne
Share this:Facebook Twitter
We aim for our fact checks to be as accurate and up-to-date as possible. If you think we've made an error or missed some relevant information, please email team@fullfact.org.