Are there more nurses on our wards?

This isn’t substantiated by the available data. We don’t have figures specifically for the total number of nurses on hospital wards. The claim refers to figures just for nurses working in ‘general care’ with adults, which misses out some nurses in children’s and mental health services who also work on wards.

Department of Health, quoted on February 19 2017

The government’s claims aren’t about all nurses: they’re quoting the number of nurses who work with adults in “acute, elderly and general” services and calling those nurses “on our wards”.

But the measure it’s using still excludes some kinds of nurse who will work on wards, like children’s nurses and those who work in mental health.

The Department of Health pointed Full Fact to figures specifically for nurses working with adults in “acute, elderly and general” services to back up its claim.

That’s a hugely wide-ranging set of services—from those who work in A&E to those in intensive care—and accounts for the majority of nurses who work in English hospitals and Clinical Commissioning Groups.

Excluding some of those is fair enough provided you noticed that the government is talking about nurses “on our wards”. You probably wouldn’t include nurses who work in the community or health visitors, for example.

But there will be children’s, maternity and mental health nurses who work on wards too, which means the focus on those working in adult general services is quite selective.

This matters, because the changes since 2010 look different depending on which types of nurse you’re looking at.

Overall nurses up 6,000, but not all types of nurse have seen numbers increase

The government’s comparison isn’t a fair one: it’s comparing May 2010 to the figures from autumn last year. The problem with doing that is nurse numbers always increase a lot in November as newly-qualified nurses enter the workforce. 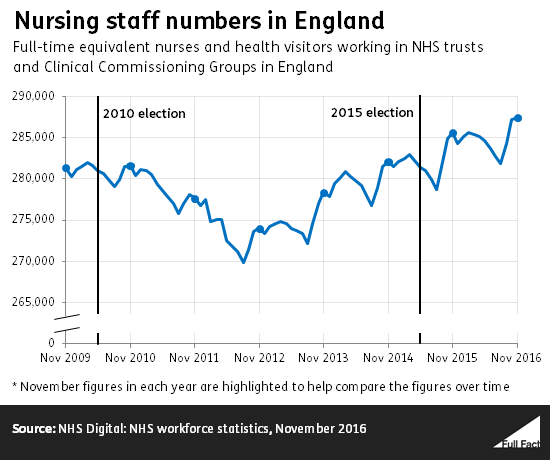 That said, this doesn’t affect the headline claim by much in this particular case: comparing November 2016 with November 2010 would make the change 13,000.

Comparing November to November again, the overall full-time equivalent number of nurses and health visitors working in hospital trusts and CCGs in England has risen by about 6,000 since 2010.

Behind that figure, there are rises in some kinds of nursing and falls in others.

The bulk of nurses who work with adults in general services is up by about 13,000 —that’s the figure the government is highlighting. Children’s nurses are also up by over 6,000 and health visitors by over 1,000.

It’s not possible to know exactly which nurses you’d see working on wards in these categories. If you included children’s, maternity and mental health nurses along with the adult general nurses, the rise would be around 11,000, for example.

So there’s still reason to think that nurses ‘on wards’ could be up by a similar order of magnitude to what the government is claiming, but we don’t yet have figures to make the picture clearer.