Nurses in the NHS: up or down?

Staff numbers on the NHS are often a favourite topic for claims at Prime Minister's Questions, and today was no different. Afterwards, the Labour press office on Twitter directly contradicted the Prime Minister's claim on nurse numbers.

The Prime Minister is referring to the number of full time equivalent nurses in England, which is up by around 2,000 since the election. Labour hasn't justified its own claim, but it's possible they're referring to an alternative 'headcount' measure of nurses. This isn't necessarily as useful, and Labour has itself preferred the full time equivalent measure in the past.

Neither claim appreciates that nurse numbers vary within the year. Numbers peak in November as new trainees enter the workforce and tend to fall throughout the year. The latest figures for England cover November, so these are the most meaningful months to use for comparison.

Counting NHS staff isn't as simple as you might think. The NHS count their staff using two main indicators: 'headcount' and 'full time equivalents'. Headcount is what it sounds like: the actual number of different people working in the NHS. But this will be a mixture of part time and full time workers.

So if there are 50 doctors and 100 nurses at work, it's not necessarily all that informative to say there are twice as many nurses if all those nurses just work part time while all the doctors are full timers. That's what 'full time equivalent' measures are for — they count the 'effective' number of staff based on how many hours they're actually working.

There are 770 fewer individual qualified nurses in the NHS in England since May 2010, but the nurses that are there are working more hours a week: there are 2,100 more full time equivalent nursing staff over the same time period.

But there are almost always fewer nurses in May than November of any year because newly-trained nurses tend to enter the workforce in the autumn, so it's more useful to view the headcount drop steeper at 1,300 and the full time equivalent rise smaller at about 1,400 (comparing Novembers). 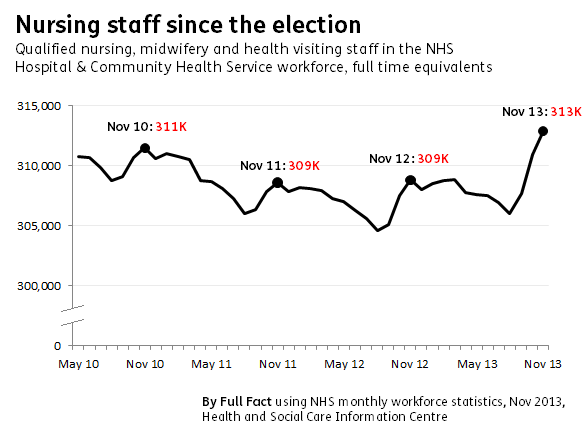 Neither measure of staff numbers is wrong to use, but full time equivalents are arguably more useful than headcount for comparison because they better reflect the hours that are actually being worked. Labour has in the past also preferred this measure in its claims about nurses.

The numbers above also refer to quite a broad grouping: all 'qualified nursing, midwifery and health visiting staff'. But the full time equivalent rise is mainly due to midwives and health visitors. Ordinary nurses have actually fallen by over 1,500 since November 2010, but rises in the other staff roles more than offsets this.

These nursing figures are for England rather than the UK as a whole. References to England have been added to make this clearer.